All in all, my first experience using Hamilton Bike Share was fantastic: convenient access, easy operation and a very comfortable ride.

Last Friday, Hamilton Bike Share started deploying bicycles to bike share hubs across the city. According to a news release issued on Friday, around 200 of the city's fleet of 750 bikes will be made available for people who have already signed up for an annual or monthly pass. On Sunday, I had my first chance to try out the system. 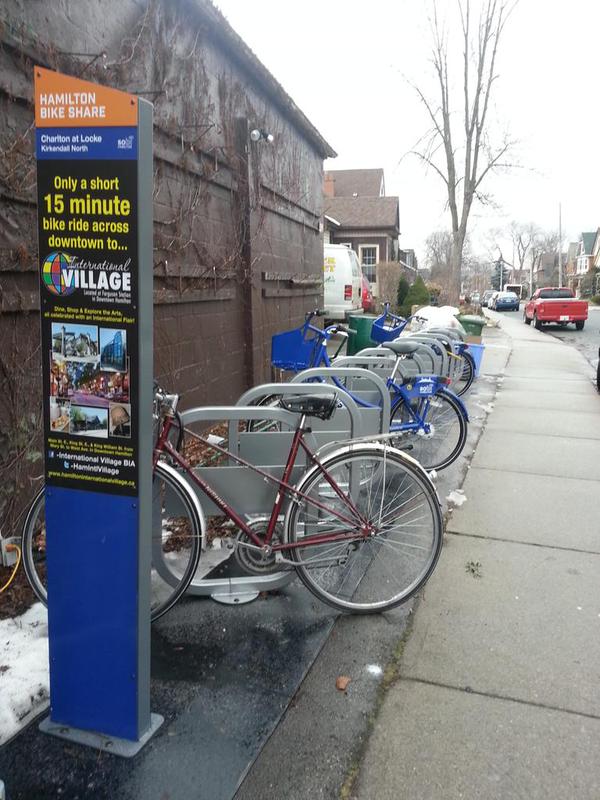 I fired up the SoBi application I have installed on my phone (the application is available for Android and iPhone), and encountered a map centred on my location with the locations of nearby hubs highlighted.

Each pin includes the number of bikes and is color-coded: hubs with no bikes are red, hubs with one bike are yellow, and hubs with two or more bikes are green. 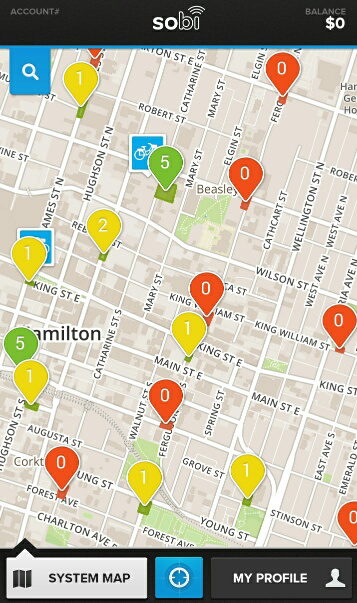 Obviously there aren't many bikes in circulation yet, so a lot of the hubs are red. The good news is that there are a lot of hubs, so it wasn't hard to find one within walking distance.

When you tap a hub pin, a box pops up listing the number of bikes at that hub, the distance to that hub, and an arrow indicating the direction. Tap the box and you are taken to the hub page, where you have a large, friendly green button to rent a bike.

From the time you tap the button to reserve the bike, you have 60 seconds to cancel your reservation and 20 minutes to pick up your bike. If you cancel the reservation after the 60 seconds is up, it sounds like the time that the bike was reserved comes off your total time allotment for the day.

When you reserve a bike, the app provides both the bike's number and its name. My first bike was 062 Dodger. I walked over to the hub on the southwest corner of Charlton and Locke and found the bike waiting for me with a notice on the display that it had been reserved. 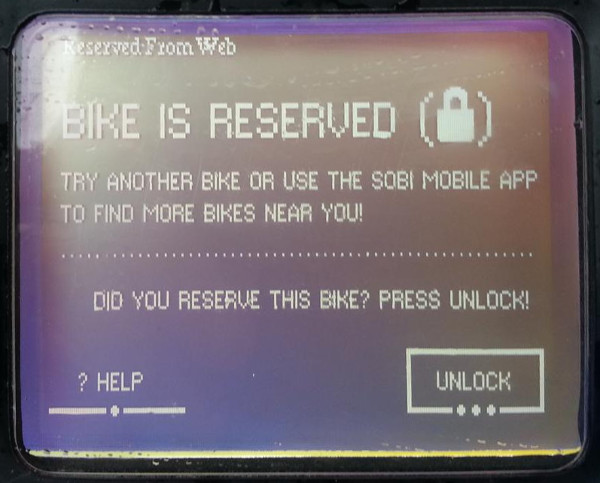 Bike is Reserved notice on a Sobi Bike

I clicked the Unlock button, entered my PIN and the bike was unlocked. I pulled out the U-lock and slid it into the storage slot to the left of the onboard computer. 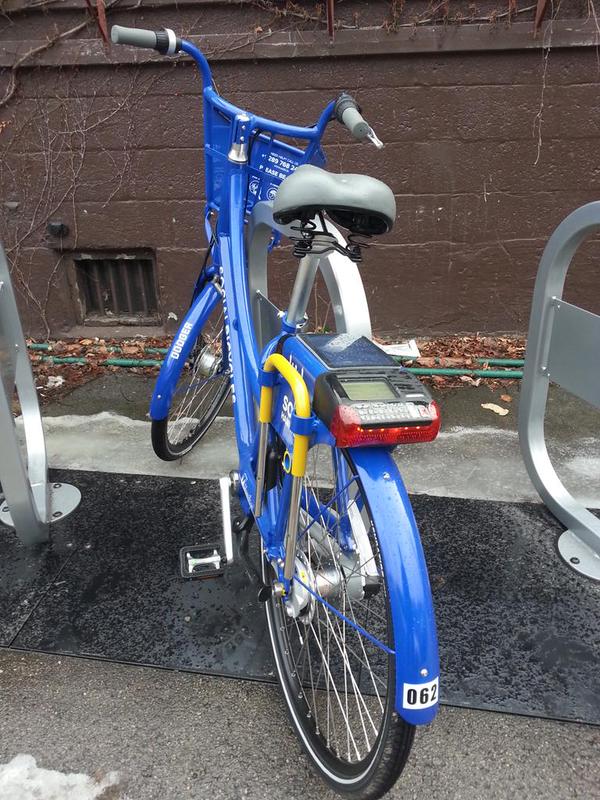 Then I rode over to my destination, in this case the Fortinos on Dundurn between Main and King.

The ride was extremely pleasant. The bikes are heavy - around 20 kg (45 lbs) according to Social Bicycles - but very stable. They don't go very fast, but the ride is very comfortable and the three-speed shifter is easy to operate.

The handlebars have a nice angle and a comfy grip. The bell is on the left handelbar and dings just like a loud toaster oven when you turn it (yum!).

The seat is soft and comfortable, as well as being easy to adjust up and down. The seating configuration is upright and civilized rather than forward-leaning like a mountain bike.

The chainless drive shaft is enclosed, so you don't have to tuck in your pants to avoid them getting caught or stained. The wheels have generous splash guards so you can ride through puddles with impunity. There is a large, deep basket on front which can hold a fair amount of stuff.

All in all, these are very well-designed bikes, carefully optimized for comfort and practicality.

So I rode to Fortinos, taking advantage of the bike lanes on Dundurn. A couple of drivers tapped their horns and waved, which was nice to experience.

I arrived and released my bike on the hub at the southwest corner of Main and Dundurn. This was easy and fairly painless: just position the bike at a locking loop, then feed the U-Lock through the loop and into the holes on the right side of the rack.

The on-board display tells you whether the lock is in correctly. The best way I found to get it correct was to push the U-Lock all the way in, then pull out slowly until it clicked. Once the bike is locked properly, it's released from your account and away you go. 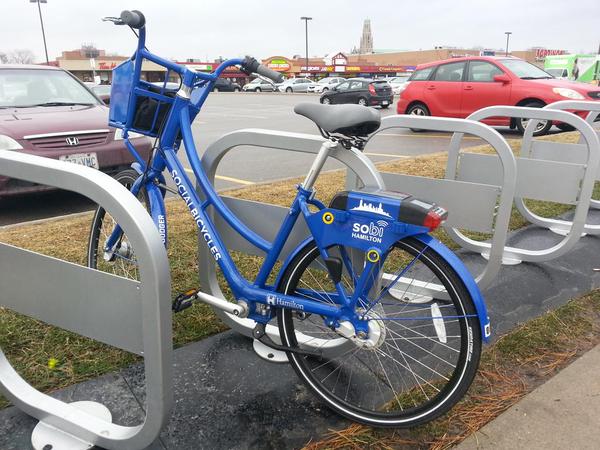 Bike released to the hub at Main and Dundurn

I bought about $45 worth of groceries at the store. After paying for it, I set about renting another bike for my return journey. I didn't want to take the same bike twice, so this time I picked the hub at the northeast corner of King and Dundurn.

Once again I was able to reserve the bike without difficulty. I walked over and unlocked my bike. 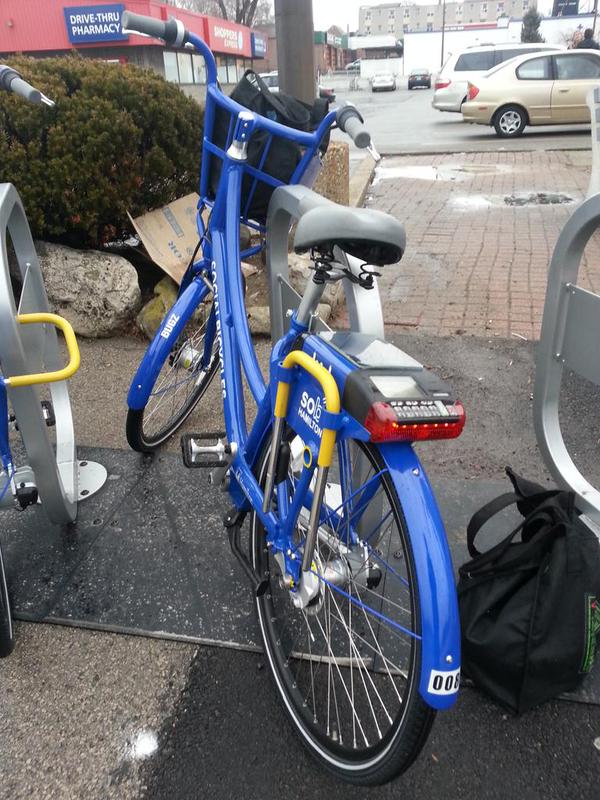 Bike unlocked at King and Dundurn

I loaded one bag into the basket and hung the other bag from a handlebar, and off I went. Again, the ride was lovely: smooth, comfortable and pleasant. This time I had to adjust my seat, and the quick-release slid up easily.

I returned this bike to the hub on the southwest corner of Aberdeen and Queen. By this time I had figured out the trick for returning the U-Lock into position, so locking it was no trouble. Again, the bike immediately showed as released on both the on-board display and my phone app. 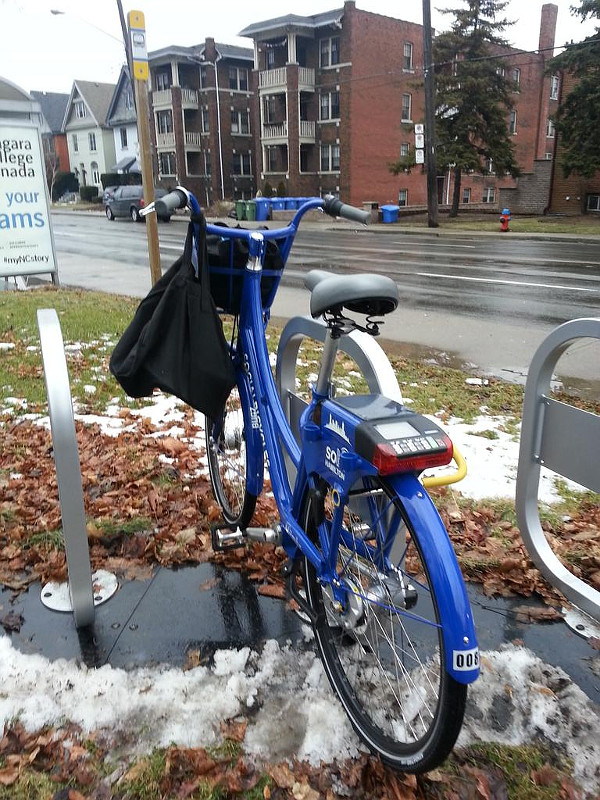 Bike returned to hub at Aberdeen and Queen

I got to try riding a SoBi bike last summer at Open Streets, but this was my first time using the app, signing out a bike myself and taking it for a spin.

All in all, my first experience using Hamilton Bike Share was fantastic: convenient access, easy operation and a very comfortable ride. I will definitely be using this service again.

The official launch of the entire fleet will take place this coming March. If you sign up for a membership now, you can use the pre-deployment bikes for free as a beta-tester. The bikes are not yet available for single-use rental.

According to Chelsea Cox, Community Manager with SoBi Hamilton, "The membership clock for Annual and Founding Memberships won’t start ticking until the official launch of the program on March 20, 2015 so members will get 14 months of usage but will only pay for 12 months, and Monthly Members get two months for the price of one."

To learn more and buy a membership, visit: www.sobihamilton.ca.

Update: this article originally stated that the bike chain is enclosed. In fact, the bikes use a drive-shaft rather than a chain to transmit power from the pedals to the wheel. RTH regrets the error. You can jump to the changed paragraph. Thanks to AP for pointing out the error.

sounds great. Thx for the review.

One question: when you reserve a bike does it remove that bike from appearing on someone else's map while searching for available bikes?

I rode a Sobi bike to work today, and it was fantastic. Really, really nice bikes. Logging in/out was a breeze. Excellent first experience.

About as simple and flawless as I'd expected. Going to try one in the coming week for sure, though I'll have to venture West to Gage Park to get one :( Hoping they will expand East to Parkdale one day if the service becomes popular enough.

So if I walk up to a bike that is not reserved, is there a way to claim it without going through the app/website? Do they have any voice-phone or SMS-based approach to claiming a bike, or is it data-only?

How are seats raised / lowered? Are they secured to the bike or quick-release?

Looking at the fourth picture in the article, it appears there is a quick-release handle on the seat-post bolt.

Thanks so much for the detailed story and the photos. I have social anxiety but one of my goals is to someday try and ride a SoBi. Seeing how the full process works really helps.

Likewise, thank you for the demonstration of the system!

It is delightful how much cycling has gained legitimacy as a form of transportation, since I first started commuter cycling more seriously after the first gas spike to 1.40 after Hurricane Katrina circa 2004.

Back then it was total lone-road-warrior stuff. Now Cannon St is tamed, Hamilton has a bike share, and there are green bike boxes ... not overlooking the gaps that still exist, the transformation over the past decade is pretty cool to witness.

Looks like a great system! Does anybody know if more stations are going to be added as the system fully rolls out? In the pre-rollout maps I remember there being a station planned for around the corner from me (at Queen and George) but there is nothing there yet.

Good news, I sent them a message asking if additional stations will be installed prior to the full spring roll out and it sounds like there will be!

My message: "... I was wondering if additional stations will be installed as the system fully rolls out in the spring, or if all of the planned stations are currently installed. In the maps shown prior to the roll out, I recall there being a station in Hess Village at Queen St at George St. This station is not on the map anymore, which is unfortunate since this would be right around the corner from my apartment ..."

"Thanks for your interest! We are still adding a few stations that have been delayed due to city projects, etc. In this case, we will be installing Queen/George before our full launch in March (as well as King/Hess)" ...

"The chain case is enclosed, so you don't have to tuck in your pants to avoid getting caught or stained."

I don't believe there's any chain at all. The bikes convert pedal-power into forward momentum via a shaft-drive. Pretty awesome!

The bikes look pretty well painted and sealed ... I don't know that rain and snow will be a problem.

Until it was stolen, my Dutch-built three-speed sat outside all day, all night, all seasons for four years ... there was a bit of rust on the kick stand. Bikes, just like cars and motorcycles, can be built for the elements ... we in North America have just forgotten that it is an option.

What if you lock the bike to itself? Is that ok?

I don't think this is possible because of the way the locking mechanism is built.

Had my first look at the system this weekend. The bikes themselves look more pleasant to ride than the bikes formerly known as Bixi. https://jnyyz.wordpress.com/2015/07/12/h...