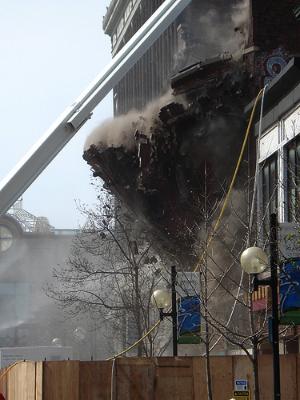 You've heard of "demolition by neglect", in which a property owner allows a building to become so dilapidated that it collapses.

Perhaps it's time to add "demolition by disinformation" to the list of dirty property owner tricks.

While the actual Spectator articles covering the recent collapse and demolition of the Balfour building on King William have drawn the distinction between it and its neighbour, the Lister Building itself, much of the commentary has tended to conflate them.

From today's letters to the editor page:

The Lister Block is doing what our city council geniuses couldn't - making a decision.

Note to demolition crew: continue half a block west and a full block north, and there you have it - Hamilton's newest parking lot.

This carries on a theme from last week:

Most of King William and the Lister Block is now a dangerous eyesore and should be pulled down.

The Spectator itself has fueled the fire by posing this question to its website readers: Is it time to tear down the Lister Block?

Many, though not all, of the responses demonstrate considerable misinformation about the status of the Lister:

I am always at a loss to explain to friends and relatives why that hulking, ugly, spray-painted, empty eyesore is even still there at all.

The building is not falling due to neglect, it is falling because it is OLD.

Raise the Hammer, which has generally supported restoration and adaptive reuse for the building, has received a number of emails and comments making a similar argument, including a vigorous debate over this blog entry.

The common theme running through most of the arguments I've seen in support of demolition is that the Lister is so old and decayed that it's not worth restoring, and that the heritage advocates fighting to preserve it are unreasonable and out of touch.

However, the indisputable fact remains that despite over a decade of neglect by its owners (and corrolary failure by the city to enforce property standards bylaws), the Lister Building itself remains structurally sound and a good candidate for restoration and adaptive reuse.

Similarly, amid all the accusations of "obstruction" scant attention is paid to the ongoing obstruction of the property owner, LIUNA, to the building's redevelopment.

LIUNA bought the property hoping to capitalize on the federal government's plan to locate there. When that fell through, every subsequent plan has also hinged on public money to sweeten the deal.

It's important to keep this in mind when people accuse the city of blocking "progress". Even LIUNA's erstwhile plan to demolish and rebuild the Lister depended on having the city as a guaranteed office tenant at top-dollar premium rates.

LIUNA bought the property knowing it was a heritage building. If they're not prepared to honour its heritage status and develop a viable business plan to get it working again, they need to sell the building to someone who will.

The Spec asks a misleading question to stir up debate, but then feels no sense of responsibility for the quality of the ensuing debate. They should be embarrassed that the majority of reader responses consist of misinformed, unsubstantiated assertions: "Tear it down!" "It's falling apart!" "It has no historical value!" "New construction and parking lots will revitalize our downtown!" I can't imagine what they think they're accomplishing with this bilge, but I'm sure they're busy patting themselves on the back for letting their readers 'have their say'.

The spec and the city has too often acted as a mouthpiece for liuna. Look at tim mccabe last week saying it was 'impossible to predict' and the spec just spitting it out on page 1. At least the editorial (by robert howard) stated the obvious, that 'no one looks good' with the building falling down, that's a pleasant change from last year when they were still falling over themselves to blame anyone but liuna for neglecting the building for so long.

somehow, i always knew they'd get what they wanted. congratualtions, liuna. your greed and corruption know no bounds. i look forward to both the lister and thomas buildings magically caving-in as well. oh, and the senior's residence will be a boon to the street, no doubt. thanks again, joe and take care.

If all of you who think that the Lister should be saved why don't you put your money together and buy it off of Liuna, rather than just complain on websites?

Tear down this eyesore once and for all and let the downtown move forward. This is an embarassment to the city.

By the way, if it had not been for Brian McHattie, a replica of the Lister would be half complete by now instead of this shit-box we have to look at downtown.

Perhaps if the city charged more in taxes for abandoned properties than it does for active ones then we would see a lot less of this kind of behavior. As it stands, it's all too profitable to let buildings rot.

Perhaps enforcing laws mandating cleaning up of graffiti and preventing entry would be helpful too.

^i'm no expert but i am a believer in land value taxation. with lvt, it's the land that's taxed not what sits on it. in downtown hamilton, land would have a higher tax rate, reflecting its importance to the city. this would all but end property speculation and perhaps we wouldn't be in this situation with the lister because liuna would be bleeding too much $$. lvt forces people to build something of value in order to recoup the taxes. call me crazy but...

oh, it could also apply to greenfields - something in short supply and of tremendous importance.

yep, same thing. i've only come across vague, passing references to it. i'd love to get my hands on something with a little more substance. i think we've got little to lose in this case.

And of course, another option is the one taken by a large number of European Nations. Leave a building derelict (often for a set period of time, six or nine months for instance), and squatters can move in. If the building owners have development plans, then they must take legal actions to evict the squatters, much like they would a tenant.

As a result, many European cities (Amsterdam, Berlin or Geneva) have a host of low-income housing, restaurants, musical venues, bike shops, art studios/galleries and even movie theaters. Developers, understandably shaken by such actions, are often prone to "anti-squatting" measures...renting the building for next to nothing until their development plans come to fruition. Either way, buildings don't sit vacant, and people don't have to sleep on the streets.

Ryan, your revisionism is a marvel. The previous city deal was far less expensive. A modern replica would have been rented by the city and created a stimulus for other James St. redevelopment. Brian McHattie and others have given us a legacy of tumbling buildings and a much more expensive proposition for the Lister which is now before our council.
Let's at least get the facts straight on this issue.

As a local legislator, McHattie was doing the decent, responsible thing and standing up for the Ontario Heritage Act. For the life of me, I can't figure out why people are so willing to defend developers who flout the rule of law.