Graeme MacKay gets it just about exactly right in today's editorial cartoon in the Hamilton Spectator: 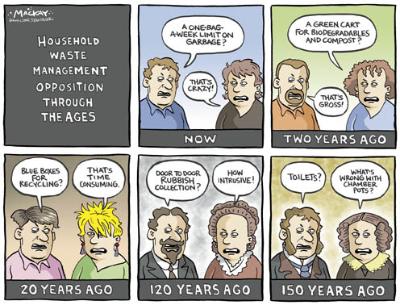 The Spec letters page is aflutter with opposition to the city's proposed one bag per houshold limit on garbage, slated to take effect March 31, 2008. To those people who claim the limit is unreasonable or impractical, I have this to say:

I live in a family of four (two adults and two children) with two cats and a very comfortable standard of living. We normally produce one or two grocery bags of garbage a week, with the rest diverted into either the green bin or the recycle bin.

It's not very time consuming, and it's certainly not difficult. My four year old has no trouble sorting his garbage into the appropriate container.

I can only scratch my head at councillors like Sam Merulla, who thinks the limit is "overly punitive", and Chad Collins, who thinks Hamiltonians "need a period of time to grapple with and accept" the changes in Hamilton's waste management program over the past half decade.

What's with all the hyperbole? It's a prudent limit on waste production that can easily be achieved even by large families through recycling and composting; but its opponents are treating it like some form of oppression.

It's time to give up the childish belief that endless, unsustainable consumption without consequence is some kind of birthright.

I think selling "overflow" stickers would be a good idea. $2 per bag to cover increased waste management costs. Most people would find a way to avoid having to buy them and it would self regulate. Then occasionally if you have a big party or some other reason for an abnormally high-volume-of-trash week, you'll be able to deal with it in a reasonable manner.

I grew up in the country where recycling and composting where normal. I can't believe how often I see people on the way down to the garbage room with a bag full of "garbage" that could easily be half or less if they'd recycled properly. I usually fill on grocery bag per full recycle bin and that's without having the green program in place in my apartment (when's that happening?) Thanks to my coucillor Chad for sticking up for lazy people. I smell a letter to my coucillor coming! Time to grapple?? I think it should be time to pay! No more gimme's for lazy people. Either shape up or pay out. Extra garbage bags should be more like 3 dollars each and there should be a limit in the number of stickers you can purchase.

How do you keep your neighbours, who may be less passionate about reducing the quantity of garbage going to landfill than you, from putting their garbage in front of your house?

We have already had someone "donate" a blue box full of unsorted recycling. Also, one of our neighbours said she saw someone put a garbage bag in front of our house after midnight.

Is the city expecting us to post a guard one night a week?

Buy a gun! haha. So we shouldn't put in a limit for garbage because there's a possibility that your neighbour might put his trash in front of your house... here's an idea. Go through it, find something with his address on it and dump it all over his front porch.

Reduce the number of sanitation workers if less garbage is going to be picked up and then you can lower my taxes. Then I'll gladly jump on board your green coloured bandwagon.