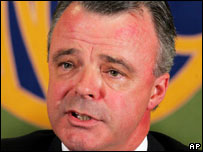 The Beeb reports that Brendan Nelson, Defence Minister for Australia, has admitted that the country joined the invasion of Iraq to maintain "resource security".

In comments to the Australian Broadcasting Corporation, Mr Nelson admitted that the supply of oil had influenced Australia's strategic planning in the region.

"Obviously the Middle East itself, not only Iraq but the entire region, is an important supplier of energy, oil in particular, to the rest of the world," he said.

"Australians and all of us need to think what would happen if there were a premature withdrawal from Iraq.

"It's in our interests, our security interests, to make sure that we leave the Middle East, and leave Iraq in particular, in a position of sustainable security."

Prime Minister John Howard rushed to pooh-pooh the suggestion, reminding voters that "the reason we remain there is that we want to give the people of Iraq a possibility of embracing democracy."

Against accusations that they were just looking for a good time, not a long time, the government insisted that Australian military forces won't conduct a "premature withdrawal" from Iraq.

(with files from Captain Obvious)