In a press conference this morning at the Art Gallery of Hamilton, Ontario Premier Dalton McGuinty announced $7 million in provincial funding to restore the Lister Block.

After a campaign-style warmup that sketched out the government's commitment to revitalizing Hamilton, Premier McGuinty concluded with the announcement of provincial money to support the beleaguered building. 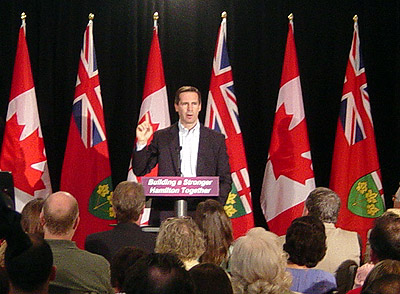 The money will go towards financing the deal an ad hoc working group struck last year in an attempt to bridge the gap between heritage advocates who wanted to preserve the Lister and developers who wanted to demolish and reconstruct it.

The province got involved after Councillor Brian McHattie asked Caroline Di Cocco, the Minister of Culture, to declare the Lister a provincially significant heritage building when it looked like City Council would grant a demolition permit to LIUNA, the owner.

A provincial heritage report supported restoring the building, and city council gave the building a last-minute stay of execution to explore alternatives to demolition.

The working group that grew out of that process ended up recommending a hybrid approach that would preserve the building's architecturally significant features but reconstruct the inside for modern use.

"Heritage buildings ... should be part of our future," said the premier, in a speech that stressed the importance of a healthy downtown to a city's overal well-being.

Mayor Fred Eisenberger echoed this when he said, "Transformation issues are going to be our future."

The plan calls for Hamilton's public health department to move into the restored building, but the Mohawk College Music Department has also expressed interest.

Mayor Eisenberger suggested that funding to move the Music Department could be part of a "phase two".

Great news! I'm going to go and celebrate with some fava beans and a bottle of dry chianti.

@RTH: This is awesome news! You guys need to take some credit for all your reporting and pressure on this when the mainstream media could hardly be bothered to cover it except to have Andrew Dreadful pop off snide columns about how the people who wanted to save the building were malcontents and hopeless idealists.

The premier specifically mentioned Brian McHattie today and thanked him for his hard work. Time to toss some salmon on the barbie!

go talk to LIUNA and HI-RISE about that. Hamilton wasn't the one with their hand out. It was the developers. You're dreaming (or from a different city) if you think private developers in Hamilton will do anything BUT come with their hands out looking for freebies. The days of "building community" and being concerned with the city's image and rep are long gone in the private world.
Compare that to prior days when folks built the Pigott building and old Birks building. They were building structures that would enhance the city, improve it's image AND make them money in the process. These days nothing else matters except a quick buck. I'm glad they decided to keep city hall. A new building would have been some piece of crap like our new federal building.

Anyone know if Lister will have street-facing retail in the old arcade? Please don't tell me they are going to turn that arcade into little office cubicles with covered up windows (like the old Eaton's store by the market).

The city is bleeding money out of its suburbs too. Any money begged or borrowed for downtown instead of for building perimeter highways and cloverleaf accesses makes much more sense. We need to breathe life into the parts of downtown that need it before we worry about getting people AROUND the city as fast as possible... Lister revitalization can only help. Let's just hope they do it right...

I echo seancb on this one...

just heard from McHattie that there will be street facing retail along King William/James as well as along the interior arcade.

I think perimeter highways are a good idea. It does less harm to the city to have a highway around it than it does to have a highway through it. We should develop Burlington St. as a throughfare to help end the madness on Main and King.

LRT through the core is an even better idea than perimeter highways though ;-)