Detroit, Michigan (in Canadian pronunciation the name rhymes with "destroy it") is perhaps the archetypal automobile city. Built to accommodate the people who built America's cars, Detroit is a car city through and through, snaked with expressways and blotted with factories and warehouses - most now abandoned.

Detroit is profoundly suburban, with house after desolate house lining a seemingly endless wash of - wait for it - one-way streets, punctuated by scrapyards and abandoned lots. Collections of blocks are bounded by mega-blocks a mile on a side, bordered by multi-lane super-roads and expressways.

The scale is staggering and it goes on like this for mile after mile after desparing mile. 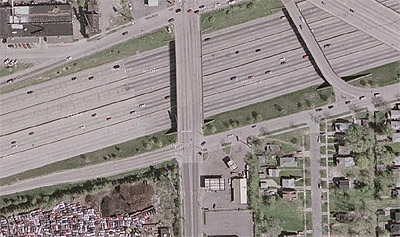 Yes, those are cars in the bottom left corner (Image Credit: Google Maps)

With resale (mainly foreclosed) properties starting under $10,000, Detroit's housing market is stuck deep in the doldrums. For better or worse (worse, mostly), the housing bubble of the past six years passed the city by.

Now, with subprime lenders teetering on the edge of bankruptcy and credit tightening, Reuters reports that houses in the Motor City now sell for less than cars.

Detroit, where unemployment runs near 14 percent and a third of the population lives in poverty, leads the nation in new foreclosure filings, according to tracking service RealtyTrac.

With large swaths of the city now abandoned, banks are reclaiming and reselling Detroit homes from buyers who can no longer afford payments at seven times the national rate.

There are so many negative object lessons to draw from Detroit that it's hard to know where to start. We can certainly posit the following:

The source of Detroit's fame and growth was also the source of its dissolution. Detroit followed the logic of automobile development to its logical conclusion, and it destroyed the city.

Now the US auto industry itself is in collapse. Ford and GM are hemmorhaging money at an astonishing rate, and Daimler is looking to unload Chrysler. All three are slashing their workforces as stagnant sales of their bloated SUVs and pickup trucks drive the companies closer to bankruptcy.

If you're in for an adventure, you may be interested in the Fabulous Ruins of Detroit, a tour through a modern day collapsed civilization.

Read "The Reckoning" by David Halberstam for a history of the rise and collapse of the US auto industry. It's fascinating.

An interesting article. I lived there for about 30 years till 2001. It seems apparent that the main problem with Michigan is that they bet the farm on the auto industry, but that is completely wrong.

The real reason Michigan is falling appart are the business unfriendly labor laws and employment taxes. Michigan is in a downward spiral. The governor has taken a position of raising taxes to off-set declining revenues. Scores of small businesses are moving out of state. The only ones left are those wooed by the MEDC with tax incentives.

If this were not the case, we would see a self-leveling of unemployment. As unemployment rises, labor gets cheaper and that attracts business.

Michigan had a lot of great companies - Comerica bank, Kmart, Dow, Masco, Rouge & Great Lakes Steel, and on and on. All of them have gone bust, moved out of town or are in the process of moving (Dow is rumored to be selling themselves). That's in addition to the auto industry. Most of the auto industry crash in Detriot happened 5 to 10 years with major plant closings. There hasn't been much to close, save the corporate offices of Ford, GM and Chrysler.

Things will not change for Michigan until a more favorable business climate is established, and that means the Governor and the Detriot Mayor need to go.

Businesses don't always go where taxes are lowest. If they did, they'd all be in thailand or bangladesh -- or somalia, where there aren't any taxes at all. More relevantly, some automakers are moving from the southern u.s. to canada, where the taxes are higher but the workforce is better-educated.

Of course, I'm getting out of michigan 'cause of the job market here, so maybe I shouldn't talk.

I would say that you're wrong about the taxes. The net taxes on businesses are much higher that most other states.

My point was that the cycle has to be broken, and businesses aren't going to be the ones to break it.

IS THE RUIN OF DETROIT A HARBINGER FOR THE ENTIRE USA?

Today Ford announced it would build a new small "world car" in...... Mexico. Detroit crumbles, half the city is under the poverty level and living on YOUR tax dollars and NAFTA and Ford give us nearly 30,000 new jobs in Mexico. This country is nuts or suicidal? The divide between the rich seeking to get richer at the expense of the middle class is the biggest threat to America.

Go to this site and get involved. At least you'll be doing something instead of just watching the carnage on the sidelines.

What political party has ruled Michigan for the last, I dunno, 50 years?

What political party has governed Detroit for decades?

In what state are Unions the strongest?

This is simply the logical end result of liberal, Democratic government. It bears a surprising resemblance to the collapsed economies of the eastern European countries.

High taxes. Crime out of control. Unions preventing wages from falling in response to increasing unemployment.

But hey, keep on blaming everyone else. It was NAFTA. The car.

OK geoman, I'll see your Detroit-as-liberal-failure and raise you a New York City and a Boston, two liberal, Democratic cities with high taxes and strong unions ... and two of the biggest, strongest economies in the USA.

The real truth about what happened.
I lived there since I was two years old.
I am pushing 60 now.
There is always a social-economic pattern to the changing demographics of large cities in America.
But the biggest reason is a compilation of things happening at the same time. Thank you dimorats.
Crime. Corrupt Mayoral administration in Coleman Young. Welfare given out to people like M&M's. Entitlement programs. N O pride of ownership. No shame. No men in the house raising the children. Drugs and sex prevelent. No One Watching the Children except the television.
Woman's lib, making females think that they need to go out and work instead of raising their families. Divorce too easy to get. Men not committing. Glory given to evil people and the kids emulating it.
The media promoting evil.
Crime. Drugs. Not obeying laws...man made or God's. Democrats enabling evil to take over in the name of "victims'. It is real easy to figure out. But not easy to admit.

Out of the ashes of a financial apocalypse rises Detroit's burgeoning arts scene.

On Thursday the financial difficulties of the city came to a head as officials filed for bankruptcy protection.

The slow burn of a failing economy slowly gutted some of the most affluent neighbourhoods leaving behind abandoned wastelands. Residents made a mass exodus to the suburbs leaving the downtown a shell of the American powerhouse it once was.

Now that the city is laid bare, artists have come from around the country to roost and flourish in cheap city living. Traditionally, artist communities thrive in impoverished areas turning their surroundings into funky ghettos.