What is the deal with the city replacing historic, Victorian-style lights with these ugly, flat, black things like we see in every strip plaza around town?

I live near Dundurn Park and last year they began a grounds restoration project. The new pathways at Dundurn are 'adorned' with these ugly strip-mall lights.

I emailed the project manager at Dundurn and he replied, "There were no lights at all back then," when the manor was first built - as if the lights they install are irrelevant to the rest of their restoration efforts.

So let's not be ambitious, let's not do things properly just because there were no lights back then.

At Sam Lawrence Park on the brow, the Victorian lamps were broken last year in the east side of the park. They've been replaced with (you guessed it) the same ugly strip-mall lights.

I used to love taking pictures there with the flowers, the pathways, the historic lights and the city in the background. Now, I'll be trying to take good pics while avoiding these ugly lights like I do in almost every other part of our city.

If this one issue really doesn't matter, then why are we spending tons of money downtown to put in Victorian-style lighting on our streetscape projects?

Because it does matter.

That's why Portland uses Victorian-style lamps on every new downtown street that is reclaimed in the industrial district or re-scaped.

It's why New York City keeps using their unique "U" shaped lamps - the history, the sense of place and the fact that a small thing like lighting can change the feel and mood of a street.

Compare King St. near Gore Park to Main St. one block south. Main St. is ugly and the massive concrete poles are part of that ugliness.

Call me crazy, but stuff like this bugs me. The city should be looking to outfit every single Mountain access and downtown street with elegant lighting and colourful banners. Instead, we're doing the opposite. 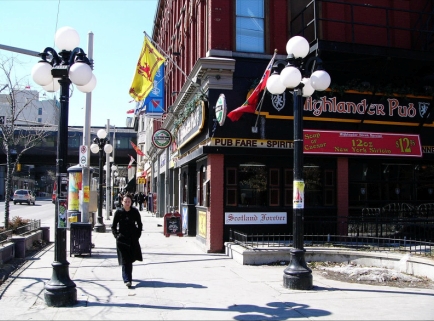 Correction: the photo for this article was mistakenly identified as being Ottawa St. In fact, it is a street in Ottawa. Raise the Hammer regrets the error. -Ed.