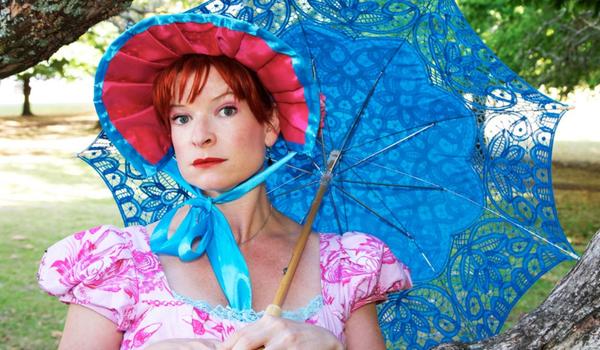 Penny Ashton is smart and funny. Plus, she's from New Zealand. Right there, I've given you enough reason to go see the show, but let me go on.

The show weaves together lots of singing, dancing and other pieces of hilarity. If you don't know anything about Jane Austen, not to worry, Ashton's show does not presume any previous reading. However, if you do know Jane Austen, you are in for even more of a treat, as Ashton pulls lines directly from Austen's text and distorts them in very hilarious ways.

Ashton's control as an actor is incredible. She has complete control over the venue, the show and her audience, even chastising one of the members of the audience when their phone goes off, all in character. It was incredible...still, airplane mode, people!

There is audience participation, so if you don't want to take part in a dance lesson from the regency period, don't sit close to an aisle. And conversely, it you do, fight for an aisle seat.

But this isn't just a series of vignettes, although the scenes shine in their own right. From scene to scene Ashton weaves together narrative magic to connect pieces together in a completely unexpected and amusing way.

This is definitely a must-see if you are at all a Jane Austen fan, but even if you're not, you won't regret coming. Also, bring a toonie...just in case.