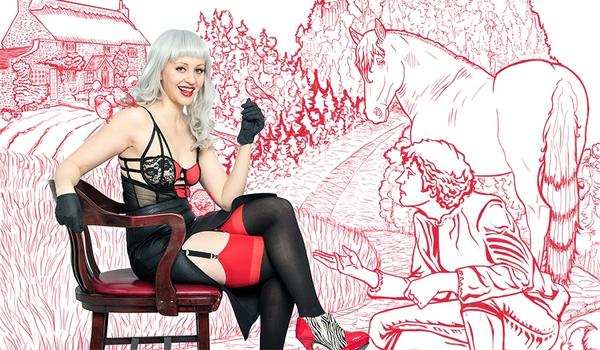 A Fringe festival is an important place for a theatre artist to get to do your own thing. It is particularly a vital space to explore material with what we would call "adult content", as often there is no other place available where you can explore this subject matter in a public forum.

Quite similar to Carlyn Rhamey's play "Soar", which played the Hamilton Fringe back in 2016, Caitlin Robson's play is, at its heart, about a woman trying to find an authentic and real romantic long-term connection with a partner.

This is a universal theme in theatre and literature, this crazy idea that there is someone, one person waiting for us, if only we were able to find them. Sure, there are obstacles to be overcome, but in the end, just like in a good "Rom-Com", all will be well.

From seeing the play, and my own knowledge of this rather secretive industry, the essential skill in these paid encounters is being a good actor and fully committing to the role play required to get someone to orgasm. It is about accepting clients for who they are, without judgement, and living in a sex positive way to help someone explore their or fulfill their fantasies.

Caitlin reminds me of a similar performer, Thea Fitz-James, who was touring a show called DRUNK GIRL a few years back.

Robson is a very fine actor with a long list of stage credits, so why do this kind of work? Basic survival, in a city like Toronto, where rents on a small apartment are now reaching $2,200 a month, might have something to do with it.

Caitlin freely admits in the performance that the script is not finalized, or even written down yet, but it is clear to me that she has told these stories before.

While I think the show needs a better, more focused ending, nevertheless I found this show quite compelling, because it is so honest, authentic and true. With unusual candour, Robson shares some very personal aspects of her life. She outs herself, without any attempt to fictionalize her own experience.

Robson also tended to self censor herself at a few moments, like she was afraid to share certain details, so it is not as explicit as it might be. She also often apologized for that choice. Of course, which version of the play one makes a choice to perform - the PG13 version or the X rated version - is the choice based upon the audience that you want the play to attract.

As I am a text-based theatre creator who writes plays myself, I naturally prefer scripts that are written on the page a before they are performed. But I accept that this is not the only way to create a work of theatre. Another way is perhaps what is being attempted here, to see if a show works by improvising your way through it.

So why should you go see this play? I feel very strongly that you should support this production because it is rare to see anyone share so much of themselves onstage. She gives us the most secret and personal parts of herself in a theatrical setting.

Please don't come to this performance expecting to fulfill some prurient desire. Rather, you will see someone exposing the desires of their heart and baring her soul. I applaud Robson for having such profound courage, as an artist, to tell so severe a truth in front of an audience. That takes guts.