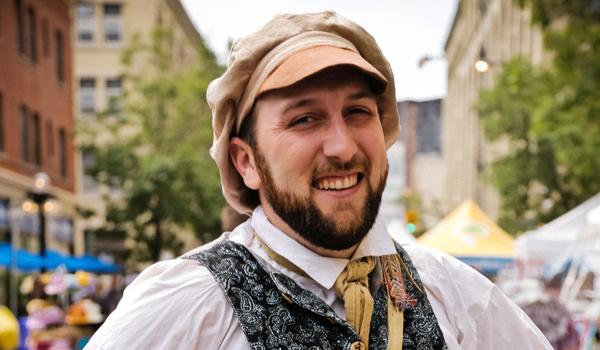 TiBert features Rob Malo as a Voyageur who takes children on a trip through life in Manitoba in the early 1800s. The show teaches children about being a Voyageur and takes them through an imaginary tour of Fort Gibraltar, which was built near present day Winnipeg in 1809.

This is a show that deserves to have lots of children viewing it. Unfortunately, the morning I was there the audience was one child and four adults, two of whom were reviewers. Despite this, Malo's energy never flagged and he had the entire audience clapping and dancing, paddling canoes, and generally having a good time.

The show is broken into two parts. At the start, we learn about the daily life of a Voyageur, the canoeing and portaging, the clothes and entertainment they enjoyed. The second half takes us through Fort Gibraltar, as TiBert goes from building to building looking for a missing shirt.

A nice touch was TiBert talking to the child in the audience during the pre-show, getting him comfortable with being in a show, and gauging how much he would be willing to participate.

If you can only get your children out to one of the family shows in the Fringe this year, this is one the to go to.