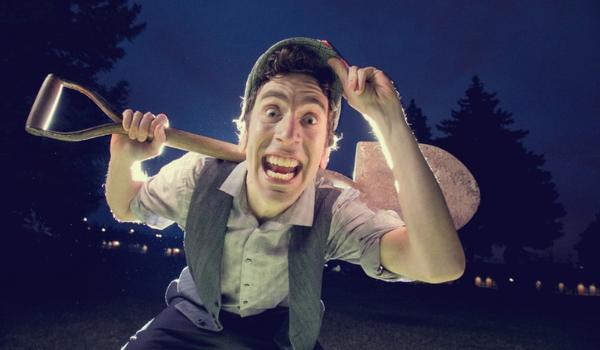 Singing his song with the stroke of his shovel and a swig of the bottle, 'David Brennan Exhumed' opens to a standing room only crowd at the Elaine Mae stage.

Reminiscent of Shakespeare's graveyard scene, the gravediggers - two clowns, whose wit emboldens them to speak of mortality providing the lighthearted comic relief in a brooding Hamlet. "What is he that builds stronger than either the mason, the shipwright, or the carpenter?" (V.i.46-47).

The second gravedigger answers that it must be the gallows-maker, for his frame outlasts a thousand tenants. The first gravedigger corrects him, saying that it is the gravedigger, for his "houses" will last until Doomsday.

Opening with lines of the Bard of the Yukon. Brennan leads a macabre dance into the crypts of the famous and infamous characters in Canadian history as the Doomsday gravedigger himself, "a bastard, a braggart, and boozehound."

The small stage is dwarfed by the singularly disturbing pine box standing upright in the center of the stage. It is both a visual symbol of what Brennan is dredging up from six feet under and great storage for his few props.

Gifted with mobile features, his face flexes like a great set of biceps, affording him a distinctive Dickensian visage. With the honed timing of a seasoned comic, try to keep up as if aiming for a cardio heart rate through a series of ghoulish tales.

Reality is stranger than fiction such as the grim and fated 1845 expedition to the Northwest Passage, narrated on the frozen lips of an ice encased crewman. My personal favourite was of a freelance writer who had penned the 'The Hardy Boys,' Joe and Frank, employed by the wizard of ghost writing, Edward Stratemeyer. (As a young and imaginative reader, I was personally glad that they did not have girlfriends.)

Bring the family for this brilliantly researched ghostly walk through the vaults of the ghastly, gruesome, grim and fiendishly delightful cast of dead characters that Brennan brings masterfully to life.

No fireside s'mores, but The Staircase has lots of snacks and the most delightful peanut butter marshmallow squares, that pair perfectly with this outstanding and popular performance.