Confessions of an Operatic Mute 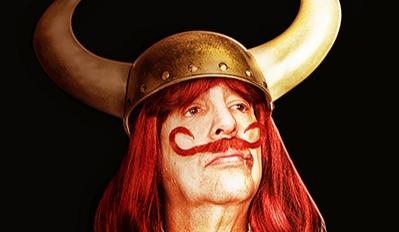 I had just been to see Slow Dancing with Mediocre Boys and was leaving Mills Hardware when Briane Nasimok stepped in front of me and urged me to return for his show. He assured me it would be "mildly amusing."

"Only mildly amusing?" I replied. "In that case, I'd be better to go across the street and get a drink." At which he sputtered something to the effect that I had to come, and the anguish in his face suggested that he'd perish if I didn't.

I'm glad I did. With so many young people performing at Fringe, Nasimok's show is a welcome change of pace, a window onto a vanished world. One I know little about.

The title sounds like an oxymoron, but if you've been to the opera you'll recall the extras dressed as soldiers or matadors or Valkyries who help fill up the stage without actually singing. Such roles were Briane Nasimok's springboard into entertainment world, and he squeezed a low-level career out of them for a good while.

Confessions is more than mildly amusing, but I wouldn't quite call it a comedy show. It's better. It's a memoir of growing up in Toronto and what Toronto's entertainment world was like half a century ago.

Early on in the show, he mentions that his childhood idol was Jerry Lewis (a comedian not very hip in 2019) and how seeing Jerry Lewis on stage was an early inspiration. It's an apt starting point for an evocative journey.

Nasimok doesn't offer much description of the places he performed, he simply describes his experiences. Yet somehow he makes me see, hear, and almost smell the rooms and the restaurants and opera houses.

The anecdotes are mostly funny but the show does its sadder recollections, notably around the early death his father, who Nasimok clearly loved very much. It's a tender moment in a performance that's personal and human and delicate in the best sense of those words. I doubt you'll see anything else like it at Fringe this year.