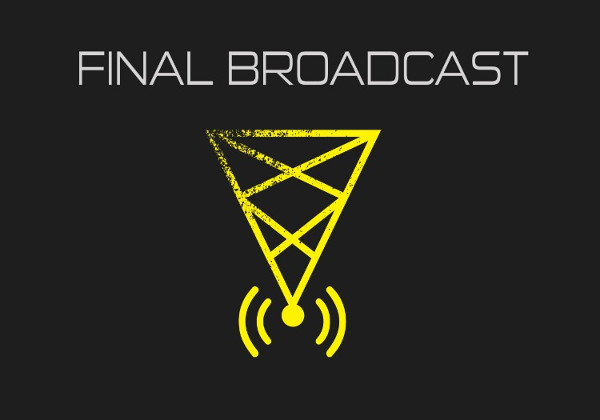 Final Broadcast is the story of a number of young people that are caught in a building after an earthquake. Not having any better ideas, the characters decide to stream video messages to the world via the internet. The show seamlessly integrates live theatre with projected video and on-screen twitter conversations.

The acting and directing in this show are top-notch. They are all totally committed to their roles and the direction feels like everyone is almost constantly in a state of movement and flux. The use of entrances and exits is particularly well done. It's hard to pick any standout performances as they were all very good, and they worked even better as an ensemble.

The set is purposely sparse, and the costumes are basically street clothes. This worked well, particularly for a Fringe production.

The theme of Final Broadcast is nothing new, namely: one or more people sending out a message before impending doom. Think of messages in a bottle, the Diary of Anne Frank or even the recent movie "The Last Broadcast".

The writing could have pushed the envelope of this genre a little more, but it really was a good story. The ending is haunting but could be reworked a little for greater impact. I did like the timing of the introduction of certain characters, as it kept the pace of the play moving along quite well.

There were some moments of levity in this piece, perhaps more than one would expect about a group of young people facing impending doom. These moments of humour helped keep the audience engaged.

What I really liked about the piece was its honesty. This was a group of young people playing young people and for the most part expressing concerns that people of that generation might express, like meeting someone you follow on social media for example.

The earthquake theme manages to heighten the stakes, which gives structure and meaning to the piece.

The house was fairly small for this show, which is a shame. It deserves a better crowd. There is a lot of acting talent on display.