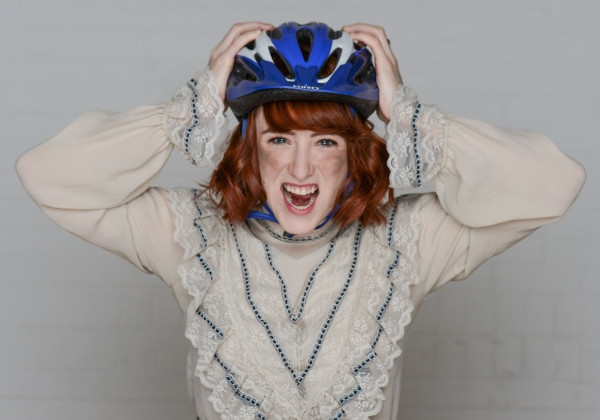 If you have not seen BikeFace yet, run, don't walk. Better yet, take a bicycle!

A true story, BikeFace dramatizes and summarizes the grand tale of a young woman who idolizes adventurers realizing that there are no great female adventurers or even archetypes that she can point to and so decides (after remembering how seasick she can get) to set off on a bicycle ride across the Great White North's legendary Trans-Canada Highway.

I have driven this and certain stretches many times, so I had a sense of the majesty that our protagonist would behold in the beyond-comprehension bewilderment that one feels across the Canadian wilderness.

Bears! Rivers! Ice cream! The Wild West! Really strange people that only interact with their small plot of land in the middle of nowhere at which the only concept of human civilization is the occasional burst of CBC radio if the antenna is just right and people -infrequently female - are travelling slowly enough to actually meet.

In other words, this is Canada and you might cross paths with some characters as you bike from Halifax to Vancouver, from sea to shining sea.

Interspersed between scenes was some old-timey radio bits decrying the perils and pitfalls of female cycling, including the dreaded "bikeface". Sort of like when you made weird faces as a kid and your parents would caution that your face would get stuck like that.

We live in a pretty backwards world in a lot of respects, and this play does a great job of highlighting that without being pedantic. After watching this production, I sought out Natalie Frijia (hello new Facebook BFF!) who is the producer and subject of the play to congratulate her and ask why she was no longer acting in the role. She paid Clare Blackwood a huge compliment by saying she actually does a better job!