Zebra Crossings on King at Locke and Strathcona

Out for my morning walk today, I spotted new zebra crossings on King Street in the distance! 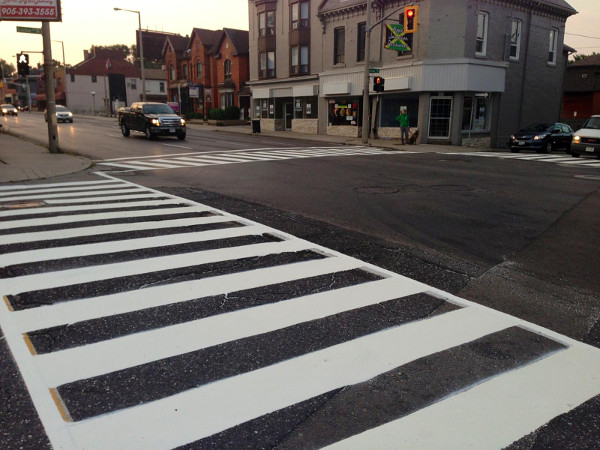 Zebra crossing at King and Locke 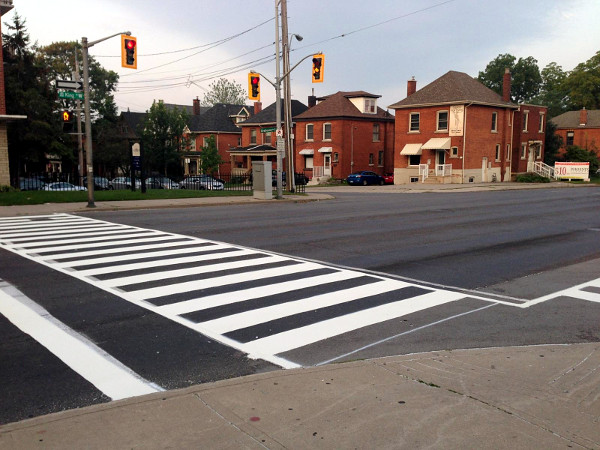 Zebra crossing at King and Strathcona

It really hit me this morning just how much more visible these crosswalks are with zebra crossings painted on. I noticed them just after I crossed Locke Street North at Peter Street, a few blocks away.

These zebra crossings were confirmed in August, as well as a zebra crossing at Locke and York - an intersection that needs all the help it can get.

Other nearby improvements in the works include a new traffic signal at Main and Pearl to match the crossing at King and Pearl that was installed in 2011.

Together, these will help make Pearl a more viable north-south route for pedestrians and cyclists, and positions it for a vision that is close to my heart: a neighbourhood greenway that would run between the waterfront and the escarpment.

Great news about the signal at Main and Pearl. If you wanted to cross near there before, you had to walk over a football-field-length to either Locke or Bay, and then another football-field-length back again. Most people chose to jaywalk across 5 lanes of traffic instead (and usually didn't make it across before the next green wave hit - scary!)

I wish they'd put a similar crossing in at Main and Poulette / Strathcona, where there is a similarly long stretch between crosswalks.

You’re right on that a crossing at Main and Strathcona (or Poulette) is needed- the crossing at King and Strathcona is well-used, but then to get further south you have to jog all the way over to either Dundurn or Locke along Main, which is quite a hike. It’s a bit strange.

(Reconstructing the bridge at Poulette would also go a long way towards making a good north-south route, but I won’t hold my breath.)

I was just advised that the road diet (from eastbound Main to eastbound King) and ladder style crossings are installed at the Delta. Curious to hear what people think.