Fringe Reviews: Bridezilla vs. The Apocalypse 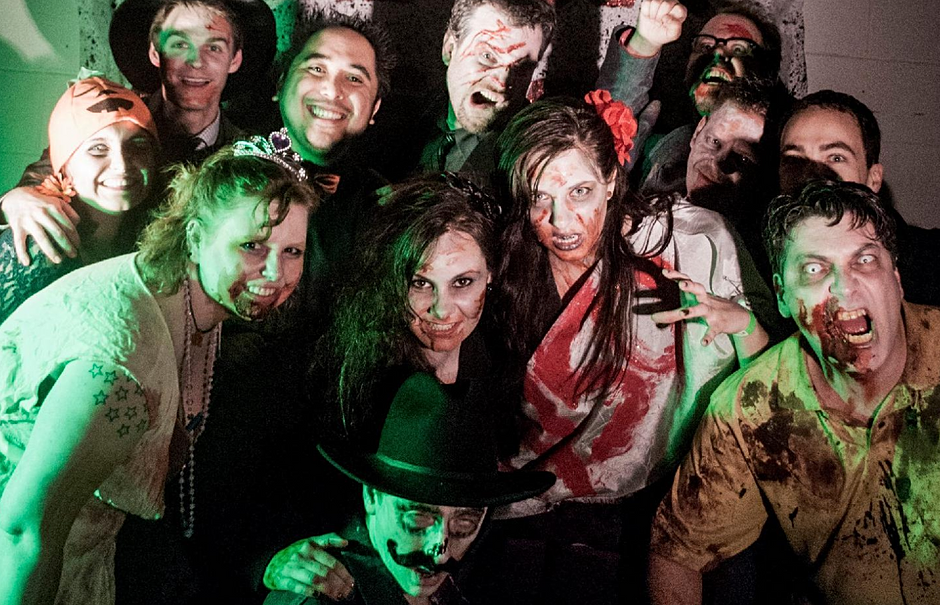 Cast and crew of Bridezilla vs. The Apocalypse (Image Credit: BrainDeadPan)

Olivia (played by Laura Ellis) is a last-minute replacement wedding planner called in on her day off because the head planner is missing. Not one but two Tim Hortons were closed this morning, and she's out of sorts without her morning coffee.

She immediately encounters Mitch (played by Matt Moore), an opportunistic videographer trying to sell an obnoxious wedding disaster story to a reality TV show. He's determined to shoehorn the day's proceedings into his self-serving narrative.

Groom Peter (played by Iain Lacourt) arrives, panicking because he can't find his best man. Peter is an anxious, effete mama's boy. Worse, it turns out he hooked up with Olivia a few months ago and professed his love to her.

The awkwardness ratchets up when Peter's imperious mother, Farah (played by Margaret Lintott) arrives with a decidedly unwell Uncle Harold (played by Tyler Brent) and begins sabotaging the bride's plans.

The bride in question is the insufferable Angora (played by Lila Hunt), an archetypal Bridezilla who demands to be the absolute centre of everyone's attention and, er, chews the head off anyone who comes into range.

When best man Brad (played by Erik Canaria) finally turns up, he's still drunk and randy after a night out with a "dirty" prostitute who bit him and said she wanted him for his "brains".

Thank goodness for Alicia (played by Kristi Boulton), Angora's level-headed maid of honour and only real friend, who shares an immediate and charmingly awkward attraction with Olivia and helps her hold this chaotic ensemble together. When Uncle Harold turns bitey, Alicia keeps her head and the shared experience of fighting him off draws her closer to Olivia.

The characters are sketched broadly, but the play takes time and care to, er, flesh them out with detail and humanity before the gruesome zombie action kicks in. Because of this, we're rewarded by actually caring about the people so hilariously fighting for their lives.

This is an extravagant production, running an hour and a half with 15 players and some spectacular special effects: gruesome makeup, elaborately choreographed fight scenes, and litres of spraying blood and spewing entrails. It's by far the biggest thing I've seen at any Fringe Festival, and it succeeds enormously at mashing together two vastly divergent genres into an uproariously funny, entertaining portmanteau of awesomeness.

Comedy is the hardest thing to do well in live theatre, but Bridezilla strikes and holds a hilarious tone throughout. The players are clearly having a great time, and their enjoyment is, er, infectious.

Ellis in particular is irresistible as the wedding planner/zombie killer, raised by a crazy survivalist father (voiced by Andrew Noble) to take care of herself and committed, despite everything, to pull off this catastrophe of a wedding.

The scenes of zombie carnage are leavened with deliriously incongruous music, including "Faith" by George Michael and Aerosmith's mawkish "I Don't Wanna Miss A Thing" (Angora's pick for the wedding song).

The players keep winking at the audience (though in fairness some of this might have been an indulgence for the final show). At one point, Mitch is panning his camcorder around the room and turns toward the audience. "Hey," he muses, "I hadn't noticed this fourth wall before."

Later, Olivia tells of having built a car out of spare parts and naming it Cthulhu. An audience member guffawed, and Ellis turned to him and said, "Thank you!"

Granted, the play isn't perfect. Notwithstanding the exemplary action sequences, the progression tends to the loose and unkempt and at times the zombies aren't the only things chewing the scenery.

But you know what? None of that really matters. A play that delivers the goods as uproariously as Bridezilla can afford to indulge in a few in-jokes, goofy asides and slipped masks. Massive props to director Steff Bishop Lampman, stage manager Aaron Middlemiss and assistant stage manager Vanessa Rundle for pulling together and sustaining a major accomplishment.

I can't tell you how delighted I am that a) I finally managed to see this play and b) it was the last play I saw at this year's Fringe. Like the delicious dessert that follows a rich multi-course meal, this play will stay on my palate for a long time.

One last thing: if the producers decided to launch a Kickstarter or Indiegogo campaign to crowdfund an indie film of Bridezilla vs. The Apocalypse, I would definitely contribute. I'm just saying.