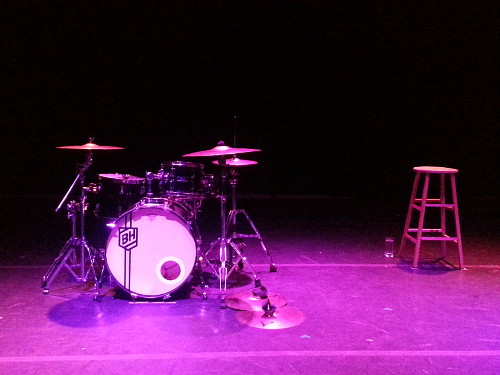 Set for Oh God - The Drums

Brad Hart is a drummer and stand-up comedian who has brought his two passions together in a surprisingly effective - and affective - manner. Not surprising for a drummer, Hart has an excellent sense of rhythm and cadence that permeates his monologue, which he delivers with ease, comfort and an arresting familiarity.

He's also extremely funny, making excellent use of timing, pacing and artful physicality to elicit steady laughter and knowing nods from the packed theatre. He even manages to turn a selection of old chestnuts about drummers - What do you call a drummer with half a brain? Gifted. - into revelations through his droll, self-effacing delivery.

He also makes excellent use of a spare stage. Every prop is where he needs it to be, and he moves among them with economy and precision. There is no distraction from awkward backtracking.

Over the course of an hour he carefully blends pathos into the humour, building toward a surprisingly emotional climax in the difficult relationship he has with his father. His passion for drumming is complicated by this difficulty, as our passions so often are, and his 160 lb. drum kit serves as a powerful metaphor for the baggage he lugs around with him.

Warning: The next couple of paragraphs contain spoilers. I don't mean spoilers in the sense of shocking revelations or Shyamalan-style plot twists. It's just that Hart unpacks the details of his life with a wonderful sense of pacing and coherence, and I don't want to take that away from you if you haven't seen him yet.

On a personal note, I couldn't help but notice some uncanny commonalities between Hart and me. I wouldn't presume to call myself a drummer, but I have a kit in the basement and I wail on it whenever I get a chance. Like Hart, I'm left-handed, though he sets his kit up in reverse and I just play a right-handed kit bass-ackwards. Judging by his appearance and pop culture references we're around the same age, and like millions of awkward kids in the 1980s, we both fell in love with the drums via Neil Peart of Rush (I became a fan after receiving a copy of Moving Pictures for my eighth birthday).

However, you don't need to be a drummer, or for that matter a Rush fan, to appreciate his story and connect emotionally with his journey. He methodically supplies all the landmarks that anyone needs to move through the world he has created.

Thanks to Hart's emotional range and delivery and director Evalyn Parry's tight, seamless guidance, Oh God - The Drums is an absolute treasure.