Last night was a wild evening in which to launch into our experience of this year's Hamilton Fringe Festival. Between the crazy weather, unexpected power outages and some remarkable serendipity, it turned out to be a real treasure.

The Gore is the beating heart of the city, treasured by many but too often neglected and even abused over its storied two-century history. Its story is a surprisingly fitting proxy for the betrayed and traumatized yet resilient community it anchors. 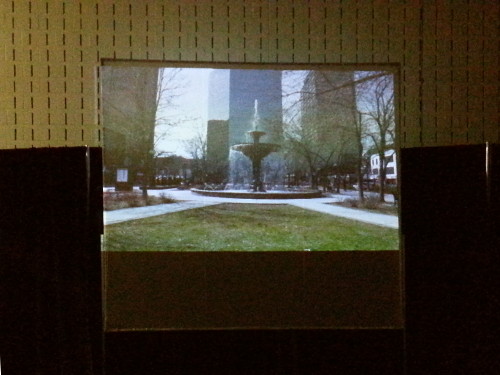 The City has always struggled with whether and how Hamiltonians should enjoy their Park. For decades in the late 1800s, the park was literally fenced and locked so no one could access it. Even after the fences were removed, city leaders agonized over what to do about the "idlers" who inhabited the Gore.

From shooting birds and cracking down on loiterers to chopping down all the trees and threatening the south streetwall with demolition, the Gore has always been a stage on which the conflicts that wrack the city play out.

To this day the Gore maintains an unfortunate reputation as a haven for "lowlifes", "winos" and "bums" surrounded by "eyesores" - though not coincidentally, that reputation seems most strongly held by people who never set foot in the park.

If they did, they might come to understand that the denizens of the Gore are not caricatures but actual people - people with actual lives, loves, friendships, challenges, tragedies and triumphs.

The Gore Mis-Fits is a sweet, charming play written by Robert Savoie of Majic Man Productions and directed by Patti Cannon. It follows the comings and goings of five characters, all friends, who frequent the Gore and support each other.

Josh (played by Jonny Kerr) is a young man, wheelchair-bound by cerebral palsy, who tries to find the meaning and purpose in tragedy. Kerr is comfortable in his role, connecting easily with the audience and stitching together the travels of the other characters.

Maggie (played by Shilo Nelson) is the widow of Josh's best friend, who suffered an untimely death. Johnny O (played by Louis Arroyo) is the cool, kindly pro wrestler who looks out for his friend Fat Man (played by Jamie Taylor), a bouncer who is haunted by the recent death of a friend.

Their spiritual leader is the long, scraggly-haired Blue Hat (played by Gord Nelson), who is about to get married. The stories turn around the upcoming wedding, and each character struggles to come to terms with the changes that are coming to their group.

I ran into Savoie after the show, and he said the story is quasi-autobiographical. The characters are loosely based on people he has come to know while spending time at the Gore - including Blue Hat, who is based on Savoie himself and talks during the play about the Fringe play he is working on.

Yet far from feeling like caricatures, the characters were earnest, fleshed out and relatable, and the easy manner in which they shared each other's company was warmly experienced.

The performance we attended turned surprisingly recursive, insofar as the audience happened to include several people on whom the characters in the story were based, and who seemed to enjoy the exchanges at a deeper level than everyone else.

After the first show, we went to the Baltimore House to enjoy some refreshments. When we arrived (after a good soaking on the way), the power was out but the taps were still working. 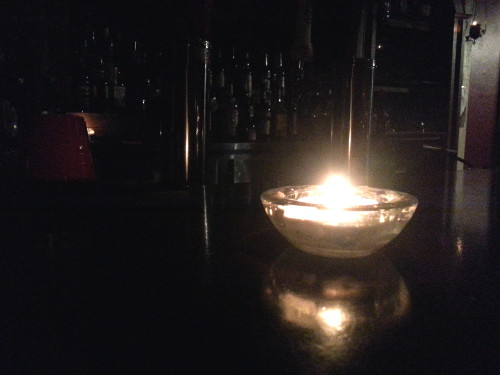 Candles lit the bar at the Baltimore House

The gothic, baroque lounge, restaurant and nightclub on King William is serving as a social home base for Fringe celebrants, and patrons with Fringe buttons enjoy a discount draft. Tonight's entertainment included live music on the east side and a breakdancing crew on the west side.

Heading back to the Citadel for our second show, we saw a breathtaking sunset during a break in the thunderstorms: 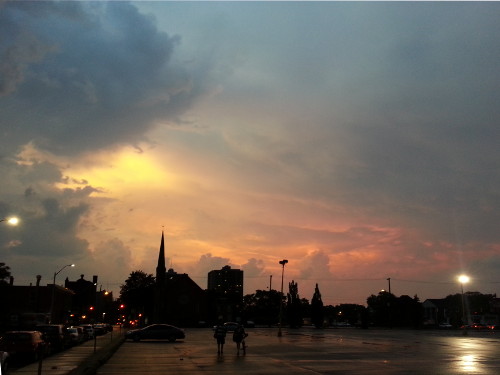 However, soon the sky grew a frightening yellowish purple, and the torrential rain returned - just in time for us to see our next play.

It is a necessary quality of live theatre to contain an element of the unexpected and unpredictable. Unlike writers, who enjoy the benefits of editing and revision, performers must walk the tightrope without a net, night after night.

When we entered the stage to watch Normal, two actors were already in position on stage: one sitting and one standing, both facing away from the audience. 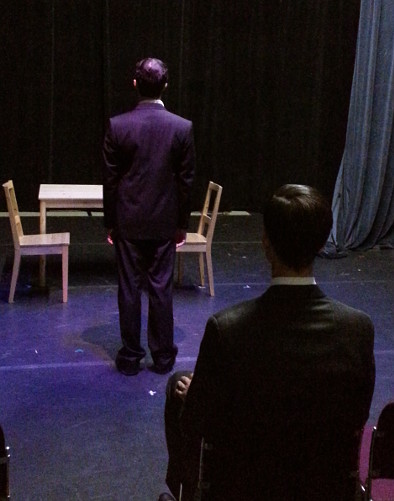 Due to an earlier power outage, there was a delay while director Jakob Ehman tried to restore the lighting program. The two actors remained motionless on stage, betraying no anxiety about the delay while the sound of real thunder rumbled overhead.

When the play finally began, their performances were seamless - and utterly enthralling.

Normal is based on the true story of Peter Kürten (played by Justin Goodhand), called the Dusseldorf Ripper, a charismatic serial killer who was on trial for a string of murders, sexual assaults and other violent crimes against both adults and children in 1929.

In the play, Kürten squares off against Dr. Justus Wehner (played by Edward Charette), the young, naive attorney who is attempting to have the killer declared not guilty by reason of insanity.

They are soon joined in their terrifying dance by Frau Kürten (played by Shanda Bezic), the Ripper's wife, who attempts to explain why she would marry someone like him.

Their performance was utterly mesmerizing and profoundly unsettling. (Between the chilly air conditioned Citadel Studio and the haunting story, I don't know if I will ever be warm again.)

Goodhand in particular was simply breathtaking as the alluring, charismatic killer, imposing his will relentlessly on the lawyer, stripping away his innocence with a surgeon's precision.

Charette, in turn, was mesmerizing in his portrayal of an earnest young professional forced to explore ideas and feelings he could not have imagined before meeting the Vampire of Dusseldorf. His transformation was riveting.

Bezic seized the role of a former sex worker who has discovered a need in the terrifying man who has fallen in love with her, breathing powerful life into the towering contradictions she must bear.

Together, the players executed a tangled emotional choreography, culminating in a loathsome physical exchange that skated past squeamishness and right up to the line - without crossing it. A remarkable feat in itself.

After the show, I learned that the performance had been plagued with issues: missing props, missed lighting cues and a grab-bag of miscellaneous bugs. Yet the performances never faltered or even hesitated. It is a credit to the professionalism and sheer talent of the performers that we were none the wiser for the technical issues they seamlessly navigated as they played out the deadly tale.

Live theatre is defined by the uncontrollable and the unexpected, and that is even more true of Fringe, where any play can qualify and anything can happen. Normal is nothing short of extraordinary.

with files from Bill Schulz

To this day the Gore maintains an unfortunate reputation as a haven for "lowlifes", "winos" and "bums" surrounded by "eyesores" - though not coincidentally, that reputation seems most strongly held by people who never set foot in the park.

If they did, they might come to understand that the denizens of the Gore are not caricatures but actual people - people with actual lives, loves, friendships, challenges, tragedies and triumphs.

Thank you for this, to everybody involved.