I thought I'd pass along a couple of quick photos I took of the MacNab Street two-way conversion in operation. I took them this morning on the way back from cycling my child to a day care on James Street North. 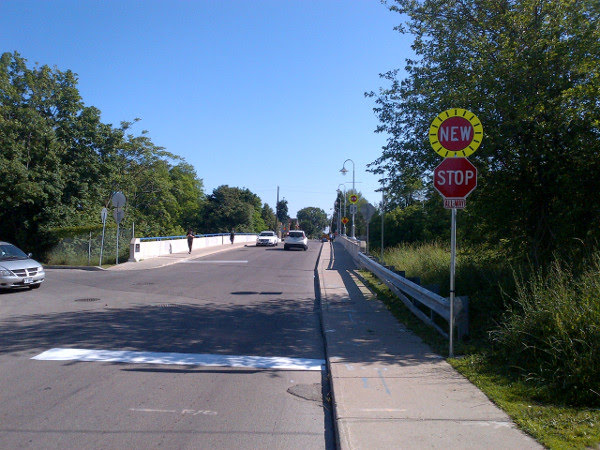 We live nearby and I was a little concerned about how the conversion would impact cycling, given how narrow the lanes would be, but it was fine today.

Traffic was light and drivers seemed to be more cautious and respectful, at least north of the bridge. I didn't have any problems south of Murray, but there was more traffic than usual because of the Bay Street bridge closure.

So far so good in my view. 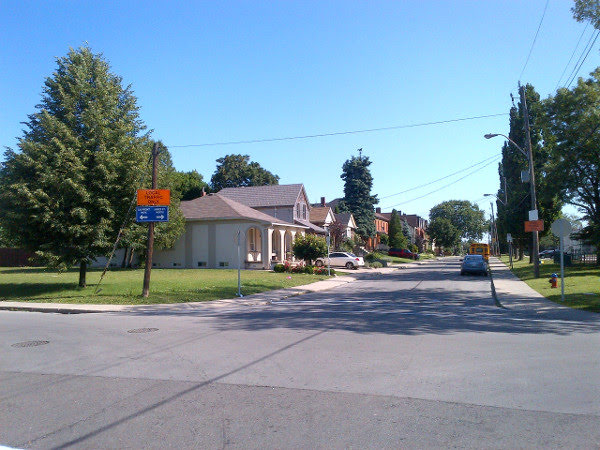 Very simple transition there. Well done. I would however love to see a stop sign at Mulberry. Yikes.
Let's get one installed before there is an accident (and there will be, trust me) and people try to blame the 'two-way street'.

[Re-posting this since it relates directly to this article. KM]

I biked along MacNab on my way downtown - what a treat that was compared to sharing James North with the cars. Until I hit Cannon that is, when it whooshy and yet boring. So I scooted over to James North, where there are other people and things to see.(1)

(2)Well, yes, there is - both MacNab and James were each pleasing in their own way. The former leisurely, quiet, leafy and domestic; the latter busy and commercial and interesting and on-toes-keepful.

Good job with the photos - they convey the feeling I got this morning pretty well.

Unlike Jason, I'd rather not see another stop sign along here, though. The one-and-the-other stop signs at Barton and Colbourne are already a bit much.

perhaps speed humps, bumpouts and sharrows would be better. MacNab is perfectly suited to be a neighbourhood greenway for exactly the reasons you've stated above.

The traffic management plan for the North End includes many of these traffic calming features, so we will get to see them in action. I understand that bumpouts are planned for MacNab between Strachan and Burlington. If they work well it will be easier to convince the city to install them elsewhere.

Most days i turn off MacNab at Colbourne, so I don't have a strong opinion on the need for a stop-sign at Mulberry. As a cyclist, I find all-way stops preferable, where stop-signs exist, but that is really just an issue where cars are moving quickly and sight-lines are impacted by large parked cars. Many of the safety issues also can be ameliorated by increased awareness and respect from all road users ... it is safer all around when there is an expectation that pedestrians, cyclists, motorized vehicles will be present and need to co-exist.