Another Anti-LRT Argument Based on Bad Analysis

As I've written in the past, if the quality of public arguments against light rail transit in Hamilton is any indication, the case for LRT must be pretty strong. In the absence of sound, evidence-based opposition, we've been left with the occasional blast of rhetoric and hand-wavy analysis from a convenient set of cherry-picked assumptions.

Today's op-ed by Ron Johnson, presumably the same author who recently penned "Repeat after me: Streets are for traffic" (see my response), offers more of the same.

I want to look specifically at transit service — when people travel from here to there — not the spinoff effects, (improved health care) that seem to have dominated the discussion lately.

One of the easiest ways to reject a proposal is to dismiss whole categories of benefits in your cost-benefit analysis.

These alleged bonuses are like the gorgeous blonde (your choice of gender) you are told just might become your passenger if you buy the convertible in the glossy brochure.

Because why base an important decision on comparative analysis from the hundreds of cities around the world that have LRT when a sexy metaphor will do?

Hamilton already has a good transportation network delivered by buses.

Said by no one who actually relies on Hamilton transit, ever.

There are few places people would need to go where the bus can not take them, except possibly in the furthest suburbs. People in the “old city” of Hamilton can get along fine without owning a car

The 2010 HSR Operational Review came to a different conclusion, based on its observation of the congestion of east-west bus routes and the high incidence of "drive-bys" when overstuffed buses pass people waiting at bus stops.

Hamilton has systematically under-invested in transit for the past two decades, and compared to similar-sized cities, our spending, ridership and service hours per capita are dismal.

The B-line bus is scheduled to run the full route (11 intermediate stops) in 32 to 36 minutes, while the 1A King route (up to 50 stops) will require 47 to 51 minutes. A car can reduce the time to 20 to 25 minutes. The difference in the time between busing and driving seems to be not speed but rather the number of passenger stops required.

LRT planners anticipate a B-line vehicle every five minutes with the complete trip lasting 31 minutes, making 14 stops. Granted, the new system isn’t even ordered yet, but this is negligible improvement for an investment of a billion dollars.

This conclusion is only possible if you ignore the following proven benefits of LRT:

Again, it's easy to conclude that an investment isn't worthwhile if you ignore the benefit side of the cost-benefit analysis.

Despite the vision “to create seamless connections between local, rapid, and inter-regional transportation services (as) a major priority” the LRT tracks remain on King Street, missing the GO centre by three or four blocks.

This is true, and it's not ideal. However, the planned north-south A-Line LRT will more closely integrate the James North GO Station. In the meantime, the B-Line may not solve every transit problem in Hamilton but no single initiative ever can.

If anything, the LRT itself will increase congestion of vehicular traffic. Reports indicate only 5 per cent of people use public transit, while the long-term goal is 12 per cent.

The overall long-term traffic impacts of LRT are hard to determine. On the one hand, it will take vehicle lanes out of service. On the other hand, it will attract many more riders out of their cars than buses can - especially during rush hour. A paper recently published in the National Bureau of Economic Research found that transit disproportionately reduces traffic congestion due to the non-linear effects of traffic networks.

We also need to consider the clear evidence that lower city Hamilton already has excessive vehicle lane capacity for current traffic volumes. Main, King and Cannon can afford to lose multiple vehicle lanes without even impacting current traffic, let alone traffic that has been further reduced by a fast, attractive, comfortable LRT system.

At the same time, LRT is highly successful at attracting private investment in new high-quality, high-density development. That will serve to increase the activity, vitality and busyness of the LRT corridor - all desirable outcomes, but they will also impact overall traffic levels.

The bottom line is that facile thinking does not help us make well-informed decisions.

Why then is the LRT entitled to more than 50 per cent of King Street? At the moment, buses and other traffic can share lanes, but under the proposal, the two dedicated LRT lanes will pass a vehicle only once in five minutes, leaving empty space at least 80 per cent of the time. For an even more stark look at the phenomenon, check out these pictures of Cannon Street by photographer Mike Goodwin.

What does LRT stand for again?

It stands for Light Rail Transit. I'm honestly at a loss as to why LRT opponents get so hung up on what the acronym means.

The capital costs are huge. The rolling stock itself is a mere $110,000.000, about 14 per cent of the estimated total. Buses are self-contained.

The per passenger life-cycle cost of LRT rolling stock is actually lower than buses, since they carry several times as many people, last about three times as long, need a lot less maintenance and are much cheaper to fuel.

But before the first LRT trolley rolls,

Clever use of dismissive terminology, but modern LRT trams are not "trolleys" by any good-faith definition.

a complete rebuild of the roadway will be required, including extensive changes to plumbing, electrical and drainage, new track, perhaps overhead wires, a $50 million maintenance facility, a new bridge across the 403, rejigging of all traffic signs, and much more.

Some of that work will have to be done anyway. The city has spent the past few years examining in detail what needs to be done along the corridor. That's part of the cost of building LRT, a cost that hundreds of cities have already proven to be a good value for money.

None of the $700,000,000 in extra charges would apply if the present bus system, offering nearly equal service, were retained.

None of the benefits would apply either. Feasibility studies by the City, Metrolinx and the McMaster Institute of Transportation and Logistics have concluded that LRT has a net positive return on investment.

The rationale for tracked electric transit is that the massive capital investment will be paid back in time by lower costs of service including longer, more frequent trains along a protected pathway.

Again, that's only part of the rationale. Transit oriented development, with the added tax assessment and economic activity that comes with it, is a real, measured, proven metric in cities all over the world, including in Canada and the United States.

The ideal rapid transit line can be illustrated by the GO train service: a single diesel pulling 10 cars and a small crew can hustle 2,000 commuters at high speeds down a separated right of way

GO train service is an excellent example of inter-regional commuter rail, but it is hardly a model of how we should build rapid transit for use within the City of Hamilton.

It makes as much sense to compare the city's LRT plan to the GO train network as it does to compare city streets with highways. 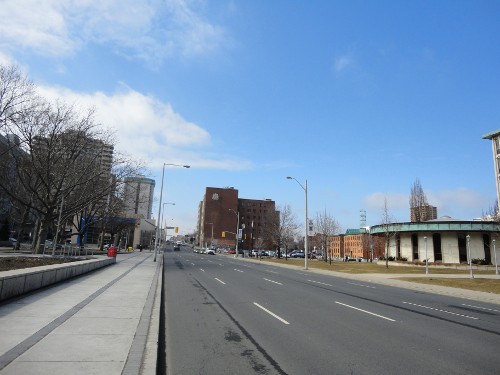 See what I did there?

The Hamilton LRT proposal does not offer improved service

It offers vastly improved service if you consider more than one cherry-picked criterion.

it travels through highly congested streets

Hamilton's downtown streets are anything but congested.

and it requires high capital costs.

High capital costs that have already been subjected to multiple cost-benefit analyses finding a large net benefit in return on investment.

That’s a giant gamble with little gain in performance, and the odds very clearly stacked against the taxpayer.

It's a smart, prudent investment, carefully planned and well-supported by the evidence, that will bring large net benefits to the City of Hamilton. The only way to conclude otherwise is to ignore most of that evidence.

Nicely done, Ryan. As annoying as some of these letters are, it does provide an educational opportunity when they're picked apart like this.

Thanks for taking the time to do it.

From the article:
" Reports indicate only 5 per cent of people use public transit, while the long-term goal is 12 per cent. Why then is the LRT entitled to more than 50 per cent of King Street?"

If the LRT was taking 50% of EVERY street in the city, he might have had a point. This is one street of thousands.

Except he's correct. We don't NEED LRT and its damned expensive. In fact nobody has the money to pay for the system.

Whether Hamilton gets the B-Line LRT or not, be prepared to pay. We are in the GTHA, the region identified by the province that will pay for rest of the ENTIRE Big move. The Hamilton LRT is only a tiny fraction of that. Everyone else is getting there's and more. We'd be foolish to turn a provincial initiative that plans for the future for the entire GTHA. Why would you want to be left behind?.

BTW, on what basis do you say it is not needed?

"Why then is the LRT entitled to more than 50 per cent of King Street?"
Because it would carry far more than 50% of the people travelling along King St. The real question is why cars get nearly 50% of King St!

On the time-saving issues... going from a peak period travel time of 36 minutes to 31 minutes is a 14% saving in travel time, which is not trivial, and will attract more people to transit. Further, LRT is cheaper per passenger than bus at the current volumes along King St.

If that man thinks the HSR is so wonderful, I'd like to see him 'enjoy' the Barton bus route for a few weeks.

"It's a smart, prudent investment, carefully planned and well-supported by the evidence, that will bring large net benefits to the City of Hamilton. The only way to conclude otherwise is to ignore most of that evidence."

..except that the author avoided to mention some obvious evidence.

Just because LRT project looks "sexy" on paper, doesn't mean it's the only option that has "a net positive return on investment". There may be options (improvements to the bus/road network, for example) that are just as cost-effective, or even better than the LRT.

I suppose the downvoters can offer something to disprove my points? Otherwise, I can only conclude that this blog is just another baseless petition for a lost cause.

Oh my God ... pictures of streets devoid of pollution-creating gridlock ... the horror! I can supply many pictures showing these streets full of (actually moving) traffic at a time of day called 'rush hour'. Guess how many articulating buses could be bought for $800 Million? It's over 1,500. How about adding a few more buses to the over crowded routes? Or is that far, far, far too inexpensive for the Ontario Government? I know ... long-term cost savings ... sure. All you can be sure of is the cost going over a Billion dollars. Pretty soon this province will be taking transfer payments from Labrador.