Hamilton Does Not Have Gridlock

Today's Spectator reports that the public works committee voted to start charging developers $50 for a two-week permit to block a lane, followed by $100 a day for additional days.

The move was in response to developers who have indefinitely blocked lanes of traffic — often causing gridlock headaches — without facing any consequences.

I really think it's time to launch a campaign against abuse of the word "gridlock". Gridlock is a network condition in which traffic in every direction is at a complete standstill. This is why drivers are not supposed to enter an intersection unless they have room to clear it - a car stuck in the middle of an intersection blocks cross traffic. At 275 King Street West by Hess, where developer Denis Vranich has blocked a lane since 2012, there is nothing resembling gridlock even during afternoon rush hour. At worst, the lane closure produces some mild congestion at afternoon rush hour with free-flowing traffic the rest of the day. 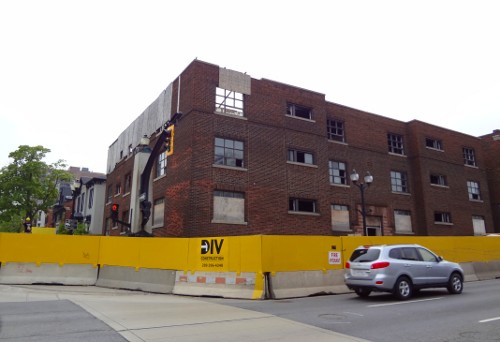 What the lane closure at King and Hess tells us is that King Street has excessive lane capacity over most of its length - capacity that would be put to better use improving walkability and cycling.

And kindly note that if Main and King were each two-way streets, rush-hour traffic could proceed westbound on Main if King was backed up. A two-way street network is necessarily more resilient to disruptions than a network of paired one-ways.

But rather than make our street network more flexible and accept a little bit of congestion as a by-product of economic health, Councillors would rather punish and deter urban investment with more usurious and arbitrary fees.

We've been killing development dead with anti-urban regulations and fees for decades: is it too much to expect Councillors to learn from past mistakes instead of re-making them over and over again? After 20 years in kensington and 6 months in moscow, I'll say most people in Hamilton have no idea what gridlock is (unless you used the 403 and last year and tried to get off at York blvd). BUT is it really reasonable for a property owner to take over a lane of traffic perpetually and suffer no repercussions? 2 years is enough time to pretty much rebuild anything. 50 dollars likely doesn't cover the cost of issuing the permit. A hundred dollars a day after two weeks is still less than the cost of a person per day(or should be), and likely less than the cost of enforcement and collection.

I think a certain developer just got his own law....

While I agree we don't have gridlock by any stretch of the imagination, this is hardly going to prevent development. We've been without sidewalks on King at Hess, right in the bar district where people walk every single weekend, for two years now. There should be a charge for that kind of inconvenience.

It's very safe to assume that King West has twice as many lanes as it needs. First there was the blockage during Good Shepherd construction which didn't impact traffic one bit. Then the King/Hess project started, again not impacting traffic one bit. Then, more recently the city agreed to allow curb parking on the north curb of King 24-7 (it used to have a 'no parking from 4-6pm restriction) and now for the first time ever, you actually have to drive safely through that couple blocks of King before gunning it at the start of the 403, aka Queen St.

King is 2 lanes west of Wellington and flows like a freeway for 22 hours a day. Now it is 2 lanes east of Queen and flows like a freeway 22 hours a day. The other two hours aren't even remotely close to gridlock, but a tad bit more normal for rush hour in a big city. With the HOV lane coming from Mary to Dundurn this year it will leave 2 car lanes open on King from Wellington to Queen. I'm hopeful we'll see 24-7 curb parking on the south curb, right to Dundurn Street. Lord knows we don't need 5 lanes there.

So we're down to the perennial challenge of coming up with funds for conversions. Hamilton is in status quo cruise control: too timid to propose a tax levy, too ashamed to admit that it's skint. Far easier to maintain that traffic volume is defining variable.

And no, Hamilton does not have chronic gridlock. There are times when intersections get gummed up, but the opposite is more often true.

Ryan, I agree with you that there is no gridlock in Hamilton. But if that is the case then what is the argument for LRT? Couldn't we just have more large buses or a dedicated bus lane on King/Main during rush hours?

Really, perhaps you may want to take a look at Detroit and Buffalo to see where these billions in new development have benefitted them.

Or you could look at one of the 400 cities that did LRT properly and learn from them.

I'd like to know what your definition of "did LRT properly" means?

Just because 400 cities (out of thousands in NA) have lrt does not mean it has been done "properly".

My guess is that a cost-benefit analysis would bear out that LRT is negative.

You and Ryan did not answer my question as to where the billions in investment came from Hamilton's GO train service expansion?

Well you just keep on guessing then, buddy.

The fee is $100 per day after a 2-week grace period, and $50 for the lane closure. This is respectably small. If you're having work done on a building that requires closing a lane for over two weeks, your total expenses are going deep into five figures and up. $100 per day after that isn't going to be a make-or-break thing.

But $100 per day will prevent Vranich from leaving a lane closed on King Street for multiple years.

My only problem I have is that this doesn't take into account the specific cases of the building. It's a fee that should be waived for projects that are good for the city (infill developments) and might be too small if it's a road that sees bad congestion (Aberdeen is a good example).

Well here is something we agree on, Hamilton does not have gridlock. Hamilton has a terrific network of one way streets that enable traffic to flow efficiently throughout the city. That is the reason that the roads should remain the way they are and not be converted to two way. That is also the reason there is absolutely no need for a light rail line through the city.

When you can have this

The absurd nonsense never stops here does it. Who are you trying to paint as stupid? Me or you? What a comparison! You are taking an intersection from the largest city in Canada, it's economic capital, and comparing it to a stretch of roadway in some section of a SMALL city. No notice of times or any other relevant information. This alone should be more than enough evidence for all the residents of Hamilton to run screaming and yelling to their elected officials demanding that we immediately spend a billion dollars of taxpayers money and build a LRT line.

Get a few dozen corporations to open their head offices in Hamilton and then we can have a serious comparison of the two cities.

On a side note, Hamilton Magazine's Weekly Poll for this week has to do with this topic. Amazingly, 66% of voters think the fines are fair and that the affect on rush hour traffic has been horrendous. www.hamiltonmagazine.com to vote.

It's truly amazing how the scenery changes according to which side of the steering wheel you are watching.

Gridlock is all traffic being at a stand still for hours. Having one lane obstructed isn't gridlock. Taking 3 hours to get to a destination that ought to take 20 minutes is gridlock. Not moving in a car for 15 or more minutes is gridlock. It happens in Hamilton far too often & for some strange reasons. Every time a serious accident happens on the 403, or hwy. 6, or on the Link, Hamilton experiences actual gridlock, & this happens more than several times a year. I know. I have experienced it for nearly 16 years. The November sleet storm had all of Hamilton, from core to burbs gridlocked. I sat at Main & Dundurn for over 25 minutes waiting for cars stuck in the intersection to move out of the intersection, but more just kept filling in the gaps. It had taken me 1 1/2 hours to get there. (it would normally take about 20 minutes)

The problem is that the 403 goes right through the heart of Hamilton, & then it crosses the outskirts several times. When it is closed, all traffic that would be on it, is..dare I say..Gridlocked onto all of the streets near it. If traffic is at a standstill from Ancaster to Stoney Creek, & through the core of Hamilton, then YES! This is gridlock. Last Summer, all GHA 403 exits remained closed from about 2 p.m. until well after 8:30 p.m. because of an early afternoon accident on Hwy 6 South. WHY? When I called the OPP to ask what had happened, the police were at a loss to explain to me why private citizens had placed barricades at the Garner Rd. entrance & exit ramps to the 403. Garner Rd/Rymal Rd was blocked as far as Stoney Creek. There was no way in or out of the GHA. I saw 2 accidents happen on Garner because of people becoming impatient. Police & ambulances had a difficult time getting to the scenes of these accidents.

The problem is the 403 & other hyw's & how accidents are handled. If an accident happens, why is the entire hwy system closed from one end of the GHA to the other? Block some entrances, or exits as need be to investigate & clean up, but why block any possible escape route for rush hour traffic? We do have gridlock, but not because of lane closures.

Well thanks I guess for the 0 comments. Suburban traffic hurts us all & is the major cause of gridlock throughout the GHA. We need to plan to get as many cars as possible OFF the 403. We can't do that if reasonable access to Main St., King St., & the GO Station are only possible by car. We had to travel to Oakville several times last Fall during morning & afternoon rush hours. It was pretty easy, because no one was using the Diamond Lanes. One car & One driver in almost all instances. No passengers. Look, if we could get even 1/2 of these vehicles off the 403, even part of the time, it would be so much better for everyone! It's not going to happen unless decent, usable public transit gets implemented in the Burbs.

I read this post awhile back. Didn't think much of it. Yesterday I was approaching King and Hess Construction Lane. Traffic was backed up as a result of the lane reduction at 5:30pm yesterday. Hurry up Vrancor please.

Really?? I drive that way every day just after five. Couple of times I've had to wait at a red light. If that's what folks consider "backed up" then we haven't got a hope in hell of making things better for the Downtown.

More proof of the vitality of the suburbs.