Yesterday morning, a water main break at James Street North and Cannon closed the intersection to traffic and cut off water to many neighbourhing properties. 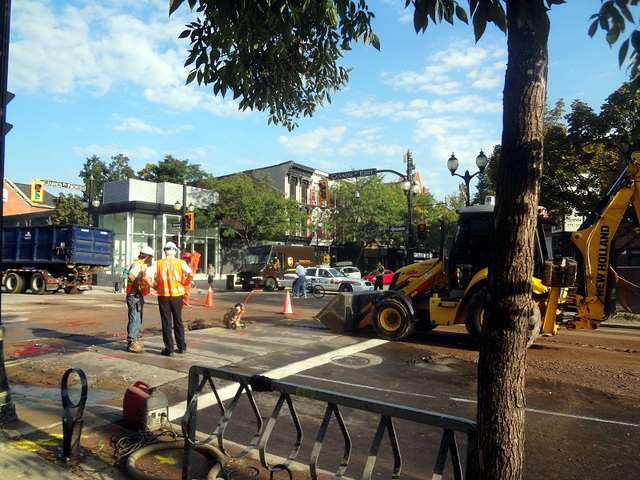 There was some concern that the break might affect James North Supercrawl, but the break has been fixed and the corner will be ready for the festival, which starts this evening.

Repair workers worked into the night yesterday, restoring water service in the afternoon and cleaning the sidewalk and street in the evening.

According to Kelly Anderson, spokesperson for the City's Public Works department, "The asphalt is being put down right now and it will be ready to walk on by noon today. So thankfully it will not affect Supercrawl."

With the aging infrastructure in the city needing many upgrades, replacements and additions this is going to become a bigger and bigger problem. If we are going to spend a billion dollars in this city lets start with the infrastructure. That will increase property values for everyone who lives here.

Didn't they replace water and sewage mains along James N just a couple of years ago?

I don't understand why people vote down this excellent comment. How much we all paying just on $interest for the Red Hill expressway that Di Ianni and his donors and the Spectator built?.

Wow! The City can fix a water main break in a few short hours but we can't even manage to paint a yellow line down the middle of the street?

cool super crawl is about crawl on all fours .. not american crawl...

Read that headline fast and was hoping for details on a fixed water cannon at James and Main.