Louvre Courtyard Used to Be a Parking Lot

I watched an interesting documentary about the Louvre on TV5 last night. They were mostly presenting the new renovations, such as the Islamic collection which will open next year, but they also described I.M. Pei's Grand Louvre (i.e. pyramid) project in the 1980s. 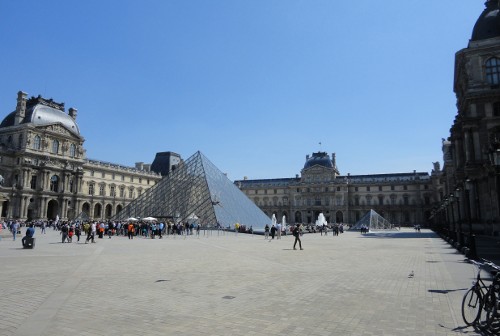 What struck me was that before this renovation, most of that huge central courtyard was simply a big parking lot for employees of the Ministry of Finance, which used to be housed in part of the Louvre. There was a small fountain and garden in the middle of the square that was inaccessible to pedestrians.

Even the people in the studio audience were shocked by the idea of just using this courtyard as a parking lot: it's amazing how attitudes change in such a relatively short time.

The moral of this story, once again, is that urban design is not some sort of innate genetic code. Paris is the way it is today because of a whole series of conscious decisions.

It used to be okay to use the courtyard of the most important museum in the world as a parking lot. Now it's not.

Hamilton could also re-invent itself as a much more successful city if it decided what its priorities really are.

I remember when James South used to have a couple of restaurants in the rowhouse section where Boo's Bistro and Bistro Parisien are now located, and The Kazoo Supperclub had a beautiful courtyard patio. It was my favourite spot in the city. I used to wonder why other eateries along the strip didn't have patios, and instead used the space to park 1 or 2 cars. Sadly, Kazoo is gone and to my knowledge, so is the courtyard.

If you didn't have free parking infront of stores, where would the owners and staff park all day??

I've often imagined that the parade ground at the Armouries on James North could be converted to a pedestrian-only public courtyard with retail shops, offices, residences etc in the adjacent buildings.

"Paris is the way it is today because of a whole series of conscious decisions. "

The Guardian‘s Stuart Jeffries has filmed Eric Hazan, author of 'The Invention of Paris: A History Told in Footsteps', sharing his thoughts on how the city has developed and and how it is rediscovering its edge—not in the historic center but in the suburbs.

1) "The Invention of Paris" by Eric Hazan is a guide, quartier by quartier, to the "psychogeography" of the first great modern city." ~ Guardian

2) "Parisians" by Graham Robb is "a new account of Paris that strips away illusions of elegance to reveal the rebel hearts of its citizens." ~ Andrew Hussey, The Observer

And they know how to let builders take over the little green space we have. Who wants to live in the core where they want intensification and then take away greenspace like Wolverton Park. The core is already underserviced with green space. And when the Board of Ed building at Main and Bay gets redeveloped there goes that little plot of grass too. Parking spaces where we were supposed to have a pedestrian area at Gore Park. just goes on and on, nothing. Heck if our mayor had his way city hall would still be in the mall. Remember Bob Bratina wanted to stay in the mall?

There's also a distinct lacking on the citizenry's part. In terms of impetus, in terms of how they see The Amalgamated City Of Hamilton, in terms of what they 'want'. (Never mind that I doubt you could get much consensus from various quarters of Hamilton about what's important. What's a priority. Nothing new here, this isn't peculiar to Hamilton...but it is part of the malaise.)

You can't think creatively, brilliantly when you're essentially living in a malnourished state.

"You can't think creatively, brilliantly when you're essentially living in a malnourished state." (previous post)

Now ain't that the truth!

Gary, stop whining and go get a building permit like everyone else is expected to. You are the master of your own misfortunes and all the blaming in the world isn't going to help you...nor is running losers like Tetley for council going to help you especially when the guy you tried to whack is still in power....change the name from The Pearl Company to The Pearly Gates...cause that's where your business is headed.

"You can't think creatively, brilliantly when you're essentially living in a malnourished state."

That one short sentence shows just how totally broken our city regulations have gotten.

A little off-topic, but speaking of parking:

Stoney Creek's councillor and residents are blaming the new parking metres for some shuttered doors in their downtown.

While I'm sympathetic and agree the metres could be part of the problem, I'd wager it has more to do with the massive box-malls that were erected on the East Mountain, the fact that mountain residents no longer have to drive through Stoney Creek neighborhoods to get to the expressway, and the fact that Stoney Creek residents can easily drive out to the Linc and get other shopping options.

I mean, it's not like "malls go up, local shopping dies" is unheard-of.

All we need then is a Louvre downtown

Wow! What a waste of space! I can't imagine that huge courtyard being a parking lot today. There are so many iconic structures there now that many movies like to take that as a backdrop. This just proves that the use of space can be quite creative if we were to step out of the box.