The bandages are off and the facade of the Lister Building is looking pretty damn good. 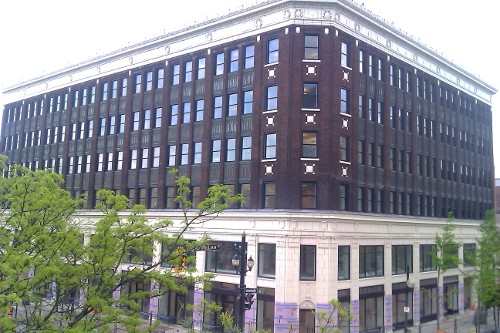 The building, which has been under renovation since 2008, was unveiled earlier this month when the scaffolding that had surrounded the northeast corner of James North and King William Streets for the past year was removed.

Once completed, the Lister will house municipal offices in the upper floors with street level retail. LIUNA also plan to build a seniors' residence in the lee formed behind the L-shaped building. 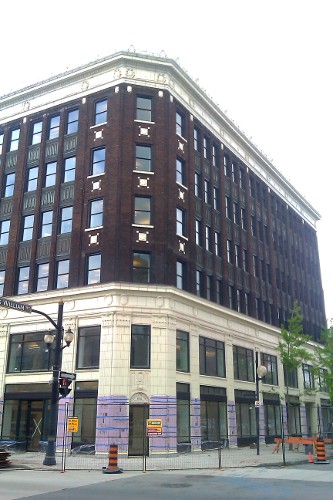 Fencing still surrounds the building and the street level is still wrapped in protective plastic, but the white terra cotta detailing on the facade looks brilliant. 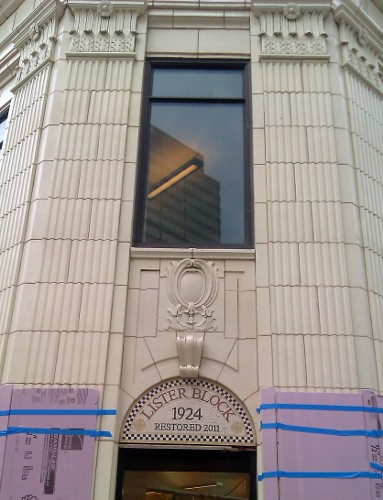 The completed Lister Building is slated to open later this year.

The Lister Building was built in 1924, after the previous building at that location burned down in a fire. Council designated the building as a municipal heritage site in 1996.

LIUNA bought the building in 1999 and it sat empty and unprotected for the next nine years while the union sought public funding to restore it. The issue came to a climax in 2006 when the city issued a demolition permit. An architectural analysis had already determined that the building was structurally sound and a good candidate for restoration.

After an intervention by then-Culture Minister Caroline Di Cocco, an offer of $7 million from the Province and a Heritage Report that was eventually released after a freedom of information request and appeal, the deal finally closed in June 2008.

In the meantime, LIUNA demolished the neighbouring Balfour Building on King William Street, even though then-Culture Minister Aileen Carroll had been advised that the facade would be preserved. The location of that building remains empty today and functions (barely) as a token parkette.

anyone know the plans for the street level retail? I'm still worried that it'll be 9-5 office cubicles. The building is looking great, and you should check it out at night all lit up. Haven't seen that in many years.

by the looks of it, it doesn't look like the ground floor will be retail, but I may be wrong (hopefully)

EDIT: found this http://joe-mancinelli.com/?p=228 which states hamilton tourism may be ground floor tenant. not the ideal, but we'll see

Originally, the ground floor was supposed to include a large'ish restaurant. Last Friday, I heard "the city with no concrete plan" was considering it for a Mohawk/Mac location. Interesting, though I'm not convinced they'd like the form factor.

Also heard that city employee's in The Right House all got new workstations, so |'m guessing they won't be moving into The Lister...

Went by tonight with all the lights on. First off, it looks amazing lit up at night. The downside is the bland, office style on the main floor. Very sterile. Still, I'll hold reservation until we hear concrete plans for the ground floor. I know some folks were looking at putting a cafe there - would be ideal IMO. Lister Coffee Co.

Regardless, I still think this is a monumental victory for the city. I believe things like the aesthetics of the ground floor will work themselves out over time. Yes, it would be great to have a running start, but having this building up and functioning is big, in my books.

Also Fred Eisenberger should get a big pat on the back for this.

You can see this builidng from the 190 in Buffalo. If the Lister looks anything like it it will be beautiful.

I heard from a very reliable source at City Hall recently that the ground floor will definitely be retail. It will also include Tourism Hamilton, which will be moving their kiosk from Jackson Square.

I know you said "very reliable," but there's also this:

And if you're looking to rent...

"Staff have estimated the expected tax impact of purchasing the rehabilitated Lister Block and moving City staff from other currently leased space within the Downtown core area into Lister. The tax impact in 2012 is estimated to be approximately $1.3 million... less any revenues realized by the leasing of space for retail purposes. It has been estimated that the market rate for commercial retail space would be approximately $25.50 per square foot on a gross basis. For example, if 2,000 square feet of space of the rehabilitated Lister Block was
leased out for retail purposes, the City could expect to earn approximately $51,000 in annual gross rent. Therefore, the net impact would be $1.25 million annually.... The annual municipal tax impact of this original proposal was estimated to be approximately $312,000 to $364,000 assuming the City was to lease 60,000 square feet in a new building of 120,000 square feet."

Wow! $25.50 per square foot? The City is going to have to attract a national retail franchise at those rates. The going rental rate per square foot is half that just a short walk up James N.

Its amazing what paying over 300% more then the going rate will get you!

Its ok though, its only taxpayers' money.

Ok, I get it, Ottawa has big money. But consider they just put one of the biggest LC's ever in Centre Mall, one of the poorest areas in the city? Surely the downtown can support a decent sized store.

The cynic in me says "one side of the street is a liquer store, one side a church, both of them keeping us poor."

I also think that giant LCBO St center mall services drivers who come from the suburbs as the whole development seems hostile to the area. Kind of a gated community for stores.

To the LCBO's eyes, Maple Leaf Square could have two key advantages over the Lister Block:

* at foot of 54-storey towers containing 872 residential units and 169 hotel rooms, meaning at minimum hundreds of upmarket customers on their doorstep at all hours of the day
* sited in a 1.8 million square foot complex that includes a 48,000 square foot grocery store (containing not just a wine shop but also a wine bar and sommelier), a fine dining restaurant and a bank (an ambitious mixed-use development possibly made possible by the connections of private sector partners such as Cadillac Fairview)

"The first of three LCBO superstores in Burlington opened Tuesday. The 12,780-square-foot store is at Guelph Line and Upper Middle Road. The shopping area of the store almost triples the store it replaced at Heights Shopping Centre. The product selection is almost double. The store is part of a growing trend at the LCBO to larger footprint outlets..."

It sounds to me like there will only be space for corporate or government uses. I imagine those could be great or disaterous. An LCBO would be welcomed, but would a Starbucks? What about a McDonalds? Unlike the building beside the Tivoli, I fear that the issue of getting a "cool" business will not be considered. My feeling is that it is a 100% visabilty space that will command top money. The problem is that you will then get a bank, law firm et al that totally kills the vibe.

how about a great cafe and Apple store??

Apple is certainly about the only company that could pay the upscale rent and some how make a connection to james st north ...

Downtown needs people (with incomes) to actually live in it. These people need a place to shop for food. Lister Block needs a supermarket.

One a rental retirement home for seniors, the other a condominium also marketed to seniors.

Each containing about 120 units.

Each -- depending on the size of the floor plate -- seven to 12 storeys high built atop a two- or three-storey parking arcade."

The Laborers International Union of North American and Hi-Rise Development has guaranteed a retirement facility will be constructed adjacent to a restored Lister Block.

“Yes, we are prepared to make a guarantee,” said Joe Mancinelli, vice-president of Central and Eastern Canada of LIUNA. Although, Mr. Mancinelli said based upon LIUNA’s development track record and community reputation, “that alone should guarantee” the work.

Yet a number of councillors believe that LUINA and its development partner, Hi-Rise, should financially guarantee that a $60-million retirement facility will be built near the Lister Block. The guarantee, said Ancaster councillor Lloyd Ferguson, will go a long ways towards assisting reluctant councillors to approve purchasing the Lister Block from LIUNA....

....the province will provide the city with the $7 million to rehabilitate the Lister Block. The money had been announced by Premier Dalton McGuinty in June 2007, with the condition the city agree to a 20-year lease with LIUNA instead of the original 15 years....