I really hope McMaster University will reconsider its decision to move the B-Line express buses off-campus, particularly given that the justification is to make the campus more pedestrian-friendly.

Transit is highly compatible with pedestrian areas. Indeed, access to good transit is a principal hallmark of a pedestrian-friendly area, since it eliminates the need to accommodate automobiles (lanes and parking) for people to travel there.

Moving the nearest transit stop farther away from most destinations on campus actually reduces the attraction and effectiveness of transit and, hence, pedestrianization.

If more students have to navigate the cumbersome crosswalks on Main St., their walking distance will be longer, their risk of collision with high-speed traffic on Main will be higher, and the convenience of taking transit will decline compared to driving.

In other words, moving the stops off-campus actually runs contrary to your goal of increasing pedestrianization. 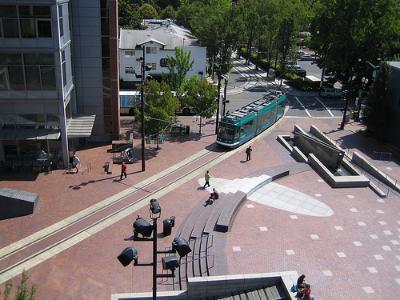 This becomes even more critical as the city moves toward rapid transit with an emphasis on light rail transit, since it will a) blend even more smoothly with pedestrians and b) further increase transit's convenience and carrying capacity.

The whole thing rather smacks of a tit-for-tat move against the city for banning truck traffic from the Sterling St. entrance to the university.

Terry Sulliven, McMaster's director of parking and security, is quoted in the Spectator explaining, "The City requirement that trucks coming to campus must use the centre core made it necessary to ask the HSR to develop a plan to reduce the bus traffic."

A light rail line through the main campus would help elevate McMaster among Ontario universities. Here's hoping the city and Mac can work together on this one.. it would benefit both parties involved.

FYI - the Flickr photo above is of Portland State University. LRT would be a boon for Mac and Mac would be a boon for LRT. If removing buses from campus is supposed to 'enhance' the pedestrian realm, I have one question: Where do the pedestrians come from?? As far as I can tell, the majority of trips to campus are via car. The next most used mode of transport is transit. It doesn't take a genius to figure out that making the bus less convenient will make the car more convenient. If Mac cares so much about the pedestrian environment (eg - the highway-styled 'front entrance') why not get rid of all the cars from campus?

Alumni, read some of the above comments. The city was simply following a staff recommendation to adhere to their own trucking route bylaws. It is Mac who is playing politics at the expense of their own students.

Sorry, I meant the comments in the linked article.

This is soooo typical of McMaster. One only has to look at their parking "plan" -- which forces cars using the Sterling Street entrance to wind a very long, twisted internal road among thresholds of student pedestrians to get to visitor parking -- to understand the lack of emphasis on pedestrian safety by university decision-makers. Even more ludicrous is the fact that a perfectly good public road exists on Forsythe Ave North that cars could use to gain access to parking (and avoid pedestrian traffic) but university decision-makers have chosen not to utilize this option... no doubt to appease the Westdale residents living off of Mayfair Cresent (some of whom are incidentally members of the university's Board of Govenors!) from having any car traffic in front of their precious homes.

Perhaps Mac is intentionally sabotaging the pedestrian amenities on campus in order to make more parking money from more cars.

Yes Jason and Mac is also spreading germs and bacteria on the city so that its scientists can gain research grants from all governments to research the plague...GROW up and stop with your conspiracy theories!

Bilbo - I generally refrain from responding to baseless comments, but I must ask you to present the 'real' reason that Mac is harming the pedestrian/transit environment on campus before you accuse anyone of 'conspiracy theories'.