The picture you're seeing here is being published for the first time in Hamilton right here on Raise the Hammer. 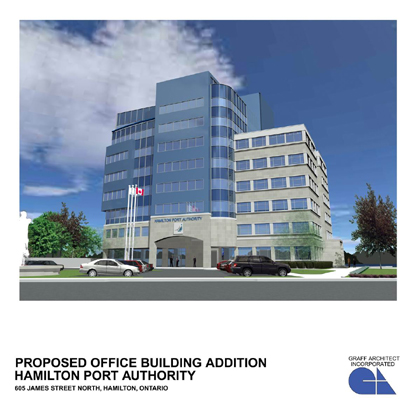 It is a proposal for a new officer tower on James Street North at the Hamilton Port Authority administration office. This plan isn't finalized yet, but the port is currently looking for some new tenants who will commit to leasing some of this space before construction begins. They even approached some of the big ports in China while on a recent business trip there to see if any of them want to locate Canadian offices in the new building.

We asked the right questions and also found out that the port has plans for a nice restaurant on the top floor with a panoramic view of the harbour and downtown. They also plan a café and snack bar on the ground floor facing the water.

You'll notice a new water feature in the left corner of this picture. Perhaps they could be conviced to make this an interactive water feature where kids and the young at heart could play and stay cool in the summer months.

They have also done a masterful job at blending the old with the new. The curved glass and sharp lines in the new building pay homage to the distinct, sharp lines of the old building. Even the materials used at the bottom of the new building blend seamlessly into the historic façade of the original.

Let's hope the Port can land a couple of main tenants and bring this project to reality. What a boost to Hamilton's North End and waterfront development. This project is much-needed and would certainly be a symbol of the new Hamilton which, thankfully, does include a wonderful, working port.

This building is a perfect fit for such a forward-thinking organization with great plans for the future of the harbour and our city.

We wish them the best.

I like the proposal. It blends the new with the old very well. Love the rooftop restaurant idea. The more cafes near the waterfront can only be good.

Hope it gets built

Not that the building proposed isn't beautiful, it is—However, it breaks my heart to think that a well conditioned piece of architectural history is up for ruination. The Hamilton Port Authority building is a rich example of Art Deco Architecture with it's distinctive period style and I believe it should be preserved. These buildings are quickly becoming hard to find and Hamilton is a tourist showcase of them. There are plenty other fallen down buildings in Hamilton that NEED revitalization this one most certainly doesn't.