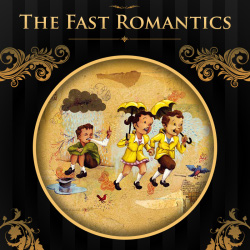 Calgary's Fast Romantics' self-titled debut is drenched in Britpop at its zaniest, from the Blur-inspired opening riff on the irresistible "Sleepy Jean" to an organ line that could have come from Inspiral Carpets.

The album starts strong with the catchy "Spooning the Gorilla", blending cheeky riffing with a driving yet plaintive rhythm that recalls "Love Between the Sheets" by Cuban Cigar Crisis.

"MoneyMouth" takes the Stooges' "Lust for Life" and transforms it through a gospel piano lead into a tribute to classic R&B. The maudlin "Hallways", also piano-driven, represents another foray into R&B, strongly recalling "Back to Black" by Amy Winehouse.

Of course, it wouldn't be a contemporary Canadian indie rock album without an obligatory swingtime pop song, and the charming "Soup Song" delivers in spades.

The album kind of flounders for a bit but then picks up again on the excellent "Stop Me", arguably the most 'indie'-sounding song on the album. That indie sound crops up again on "Gravity Pope".

They're all there in the mix, unmistakable despite the band's stolid attempt at fusing those influences into something new. Ultimately, the greatest weakness of this album is that it never quite seems to find its own place on the shoulders of all the giants it tries to straddle.

There's a kind of mid-tempo sameness to the music - I was hoping the songs would be more, well, fast - that hints at the potential for greatness but doesn't quite deliver.

For a debut album, that's forgivable. After all, the band is still very young, and they've already demonstrated that they've got the chops in plenty. I look forward to their next album; with growing confidence and steady development, they have excellent prospects of maturing and refining their own sound into something truly original.

You can listen to a selection of songs on their MySpace page:

The Fast Romantics are set to play at The Casbah on September 12, 2009.

The only major difference between Stinson & Vranich is that Harry isn't tearing buildings down. Every other aspect is the same. That, and Harry doesn't usually own the land he wishes to develop.

Everything is pretty much the same. He hypes-up a property with a fancy render (Bay & Main hotel sound familiar?), get Media and Hamiltonians talking to for Free Publicity (infomercials just aren't as cheap anymore), brings up the value of his land, then dumps it. Only problem with Harry is he doesn't own the land to profit off of it.

I'm definately no fan of Vranich, n'or am I defending him or his family, but besides a terrible attitude, him and Harry and pretty much the same.