If the city wants to shift development to the urban model, it needs to help investors and builders make the jump away from the sprawl model with which they're already familiar.

Many defenders of the new Centre Mall development have defended its big box format by arguing that the investors and developers are just trying to maximize their profits, and that they picked the big box model because it is the most profitable format, despite the aesthetic objections of urbanists. 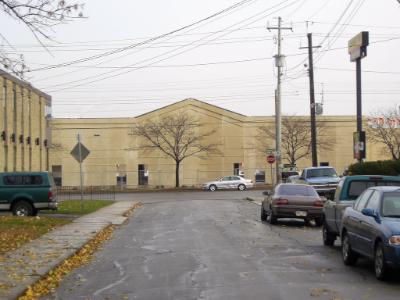 However, I'm not persuaded at all that a more urban development format would be less profitable at all.

Classical economists assume that all markets tend toward an optimal equilibrium or balance, the idea that because people respond to incentives and pursue rational self-interest, an unregulated marketplace will always produce the optimal equilibrium.

However, the evidence just doesn't support the over-simple assumption that a single optimal equilibrium even exists. Real dynamics are far more complex and offer more possibilities.

A sustainable, profitable business or collection of businesses represents an equilibrium in the economic system: an arrangement of inputs, processes and outputs that generates enough revenue to keep the business running.

The car-dependent box format is one such equilibrium, but the dense, urban streetwall format is another. Whether the market tends toward one or the other is not a straight function of market forces.

Other influences, from network externalities to path dependence to the regulatory framework itself, will push the market toward one equilibrium or another.

One equilibrium is not necessarily more or less profitable than the other for the businesses directly involved, but there are definitely big differences in utility for the neighbourhood as a whole.

The car-dependent box format helps to "lock in" car dependence - low density land use, single-use buildings, lots of land reserved for driving and parking automobiles, unfriendly pedestrian environment, less convenient transit, and so on. The very presence of this equilibrium, in turn, encourages subsequent development to follow the same pattern, because the dynamic itself becomes more valuable as more people and more places adopt it.

This is called a network effect. It's the reason everyone today uses QWERTY keyboards (even though the easier, more efficient Dvorak keyboard layout was invented in 1936). It's why VHS won over Betamax and why almost every consumer uses a Microsoft operating system rather than a UNIX- or Linux-based system. It's why sales of fax machines, which were invented in the mid-19th century, suddenly tipped in the late 1980s and grew exponentially for the next several years.

But just as car-dependent developments help to "lock in" the car-dependent model, dense, urban developments likewise help to "lock in" the urban model - higher density or people and destinations, multiple-use buildings, more compact built form, friendlier pedestrian environment, more convenient transit, and so on. Again, the existence of a dense, urban equilibrium encourages more such development.

In other words, cities that choose urban intensification rather than sprawl simultaneously enjoy an infrastructure productivity boost (more efficient use of existing infrastructure) and a boost in the rate of creative economic output.

If left to their own devices, however, investors and developers tend to stick with what they already know and seek to recreate the familiar equilibrium in new developments. They avoid the dense, urban equilibrium not because they have rationally assessed that it won't be as profitable but merely because they're already locked into an existing model.

The city enables (and even encourages) this tendency through its planning framework. An urban plan (like, say, the King-Spadina Secondary Plan in Toronto) encourages businesses to lock into the urban dynamic equilibrium, while a suburban plan (single use zoning, box stores and parking requirements) encourages businesses to lock into the car-dependent dynamic equilibrium.

Both the developers and the city planners are subject to path dependence, a limitation of options and horizons based on the outcomes of previous choices. For example, developers who are experienced building big box stores will have an easier time getting financing and putting together teams of contracters to build more box stores.

Don't underestimate the pernicious influence of path dependence at locking in a given business model. Look at the Big Three US automakers, who are stuck on an economic path of irrelevance and dissolution but don't even seem to recognize their own responsibility for their disastrous economic performance.

They actually went begging to the government for an infusion of money to allow them to go on following a business model that has spectacularly failed them. (To the credit of the US Congress, they ordered the automakers to go home and develop business plans on how to transition away from their current failed model before receiving any public loans.)

Investors and developers, like everyone else, tend to stick with what they know, and they are only interested in ensuring their own profitability. In Hamilton, that means single family homes in the suburbs and big box stores with huge parking lots.

The city, on the other hand, has an obligation to encourage economic development that benefits the community as a whole, not just the developers themselves. The best way the city can ensure this is through planning rules that encourage higher densities, mixed uses, pedestrian access, good transit connections, and coherent streetwalls.

The conventional argument is that forcing developers to follow a more urban design amounts to demanding that they sacrifice profitability for the public interest. However, an urban equilibrium is not just an incremental shift away from an optimal suburban equilibrium: it's a different balance altogether, with its own optimal arrangements and its own network effects.

If the city wants to shift investment, land use and transportation to the urban model, it needs to help investors and builders to make the jump away from the sprawl model with which they're already familiar. That involves three inter-related steps:

In its approach to the Centre Mall redevelopment, the city failed all three steps. City planners promised, "It's going to create a friendly, pedestrian-oriented design, rather than a commercial island in a sea of parking along Barton Street," but clearly this didn't happen.

Instead, the city allowed the developers to go ahead and build what they already knew: retail warehouses turned away from the street around a sea of parking. Now the Barton and Ottawa neighbourhood is locked into that car-dependent form for at least the next two decades.

As global oil production goes into decline and economies that depend on cheap oil become more and more volatile, this represents a tragic mis-allocation of resources that could have been spent on a coherent, forward looking investment that profits its investors and benefits its community.

Such a stupid waste of a great opportunity for this neighborhood. I love how we justify not changing how we do things because that would be a change from what people are used to. Isn't this the same thing Bob Robertson's talking about in his article today on the budget process? The Centre Mall redesign is nothing but "business as usual" in a city that ain't working.

"Path dependence" is an interesting concept, but I would argue that the more limiting part is not so much what exists, but the momentum of thought in council, developers - i.e. "Squelchers". You really can't expect Centre mall to be redeveloped with anything like creativity, and it probably wouldn't make much difference anyway.

I think the bottom up force from the artistic community moving from TO will be a better nidus for dense multiuse development one building at a time.

The larger the project, the more it will suck.

I'm really quite put off by the complete lack of thoughfulness going on at the Centre Mall re-development (de-evolution?) -- while I'm going to be thrilled to have shopping close by, would it really have "destroyed" the format to put two entrances on those buildings -- from the front and the back? Why not a wide pedestrian boulevard with streetscaping? Why more crappy pop-up buildings making it look like we teleported a chunk of Mississauga into the middle of the Hammer?

Being someone who works in Missisauga, I definitely agree with mycurial's description for this "development". It's just disappointing to know that no one from the architects to the city counselors saw these plans and said "hmm, you know, that huge blank wall will probably just attract graffiti, allow people one the inside to conduct "business" without being seen from the street, and make the people on the outside feel shut out." Would it have really been that hard for the architects to design the side facing a busy street with some doors?

From speaking with friends inside City Hall - the urban design department were vehemently against not having a proper streetwall facing Barton. They sent the plans and designs back several times - but were told by members of council and senior staffers to not hold up development and to sign off on this very crappy "Centre Mall" V.2.

Another nail in the coffin of what used to be the East End I knew...anyone been to Nash and Queenston lately? Bonkers - its bad!

it goes to show a couple of things:

Jason, when the city drops commercial tax rates to less than 1.5% (the same as residences), the increase in business activity will surely lead to many high quality retail establishments. Watch and see my friend.

you do realize that the city would fail to operate as we know it with a tax rate like that right?? Toronto's taxes are way higher than ours and they routinely get MUCH better urban developments than this. It's about leadership and engaging the public in their neighbourhoods, not giving away free money to businesses so that you and I can subsidize them.

Jason, Hamilton is really going to take off when tax rates on commercial properties is dropped below 1.5%. Therefore, don't worry about the city not having enough money to pay the bills, they will probably find they have too much.

It's going to be fun to watch streets like Barton finally come back to life. It's just a matter of time.

Jason, I never thought of that, Hamilton as the new Wall Street. I love that positive spirit.

Bring in the re developers!!!

While this may bring more shoppers from other parts of the city into a seriously depressed area, it does nothing to turn that area into a community. While Ottawa Street offers a certain level of community (as long as you don’t stray off the main path), the east end is without a place like Locke Street, Westdale, Hess Village or even Concession Street. Kenilworth is downright depressing.

This big box mall gives people no reason to get out of their cars and explore the neighbourhood and it give no reason for anyone in business to help turn streets (Barton and Kenilworth) full of boarded up businesses and check cashing storefronts (Drug dealers and prostitutes aside) into something vibrant. For many that don’t live in the area, it is a place where you drive through with windows rolled up and doors locked.