The organic folk sensibility blends smoothly with the jagged electronic beats and samples to produce a surprisingly fresh hybrid. 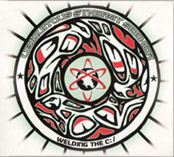 Being the lowly unpaid editor of a volunteer journal has its benefits, even after accounting for pure narcissism. One of those benefits is the fact that independent music labels occasionally send me review copies of new albums when their bands are coming to town.

Don't be off-put by the pretentious band name; these guys know how to have fun. By all accounts they put on a hugely energetic show, evidenced in part by the boisterous concert video clips shared by fans.

I have visions of the lyricist studying Margaret Atwood for inspiration and refering repeatedly to his thesaurus to put together such tongue-defying stanzas as:

That song, "Drop Around The Clock," is almost worth the price of admission by itself for its sunburned groove and brash vocals.

Opening track "2 15/16" sets the tone for much of the EP with a slow dub groove punctuated by samples, scratching, breakbeats, and Boo-Schultz spitting out lines like, "You're like iodine chasing all the storms away / You're like a black-ops licorice masquerade".

The closing track, Torquoise 1:11, rounds out the album with a bang, laying some intense breakbeats over a chilling, sawtoothed minor-key chord progression, contrasted creepily against a new-agey spoken word piece that reminded me of an old monologue by rave pioneer Frankie Bones.

Welding the C:/ is short and terse, with no wasted tracks and lots of energy to spare. The organic folk sensibility blends smoothly with the jagged electronic beats and samples to produce a surprisingly fresh hybrid.

I look forward to hearing where Boo-Schultz and Human Kebab take their sound next. In the meantime, USS play the Casbah, 306 King St W, Hamilton, on Friday, June 6. If you miss that show, they also play Philthy McNasty's in Burlington on June 21.

I caught these guys at Diesel Playhouse, it was an awesome show. Usually with two-piece bands one guy is outspoken and the other guy is quiet and shy, but these guys are both all over the place, I've never seen a turntablist clock so many kms in a single show! Also weird to listen to DNB but watch a guy strumming away on an acoustic guitar??