We reveal our values by our priorities.

I just read a very timely column in the Toronto Star by Christopher Hume:

[S]now clearing has become another powerful reminder of the extent to which we have handed over the city and much of its public space to private interests.

The main object of concern last Sunday was the driver, who, incidentally, was constantly told to stay home because road conditions were so dangerous. The best way to get around was by foot, but sidewalks wouldn't be cleared for more than a day. So on the one day when people were forced to walk, they couldn't.

In this vein, here are some random observations about Hamilton, from the past three weeks.

Two days after our first snowfall, I attempt to get off an HSR bus into a mountain of ice. No sweat; it's only been two days.

Seven days later at that same stop (Main and Sherman), I attempt to get off an HSR bus ... into that same mountain of ice. Cars roar by on a perfectly dry street.

At Gore Park, the heart of the city and home to some 70,000 pedestrians every 24-hours, I see three elderly people fall within a 10 minute span. Two of them fell and rolled down the side of another mountain of snow and ice while trying to leave a bus. The one poor guy looked like a snowman by the time he gathered himself and got up after several rolls. Thankfully, none were hurt.

At King and James, one friendly driver passed by the assigned bus stop, which still looked like Mt Everest, and instead dropped us all of at a nearby entranceway to a parking lot, which - not surprisingly - was perfectly clear of snow.

At King and Dundurn, a full 60 hours after the big storm, a kind old man was in front of the bus stop shoveling away a portion of the snowbank so riders had somewhere to board. In other words, for the first 60 hours after our recent storm, passengers had nowhere to go but up and over yet another snow mountain if they expected to board a westbound bus at this busy intersection. Thank-you to this kind fellow who struggled away much to the amazement of everyone waiting for the bus.

A block west on King, you can observe the secondary use for Hamilton's bike lanes across the 403 - a holding zone for massive piles of snow presumably cleared off of five lane King Street and dumped here because, after all, who rides their bike when it's cold out [other than your humble editor, that is - Ed.]?

On a lighter note, my wife and I enjoyed watching the snow-shoer who came up the middle of Strathcona on Sunday afternoon. The folks on skis looked pretty slick too, gliding through the city.

Finally, it was very cool to see the folks tobogganing down the stairs in front of Jackson Square on Sunday. 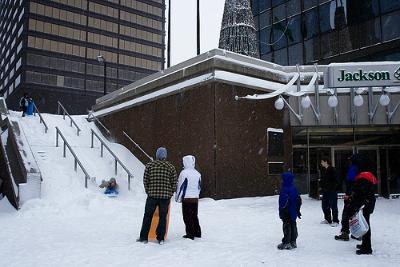 Children slide down the stairs from the Jackson Square Plaza at King and James (Image Credit: Flickr)

The fact is, you could do this most days of the winter, as half of these steps are never cleared. I'm sure it's illegal though - much too fun.

Simple explanation for roads being cleared first is that if you clear the roads after the sidewalk is done, you have to clean the sidewalk 2 times. Also, the sidewalks were being cleared already on Sunday morning. They're cleared by bobcats which take longer to clear than something like a snowplow on a road. Havings said that, I shovelled snow in my friend's neighbourhood (where the road wasn't plowed until one of the neighborhood guys cleared it with the plow on the front of his truck) and I was shocked by the number of people who don't clear the sidewalk in front of their houses. It's not a difficult thing to do and it's definitely not a new problem because I remember having to wade through snowdrifts on the way to high school but still, why's that such a hard thing to do?

Oh, I saw city workers shovelling snow at the bus stop at the corner of Upper Wentworth and Rymal on Monday evening. I think instead of using bobcats with the traditional blades or scoops on them, they should be fitted with a blower like attachment, this would allow them to move snow faster than one bucket at a time. This wouldn't really work downtown where the glass windows front the sidewalk but nearly everywhere else it'd be ok.

So in summary, it may partially be because of priorities, (don't forget, most people want to drive rather than walk if it's cold outside and all that's being done is addressing the majority) but I think the main reason sidewalks took so long to get cleared was because it has to be done last and it takes longer to do. I do however think that a good idea would be to have the bus terminals like the one at eastgate and downtown cleared continually because of high traffic but as far as the rest of the city, it wasn't as bad as it could've been. Next time...we should call in the army! ;)

I have no problem with roads being done first, but 9 days after the first snowfall (the Dec 3rd one) bus stops were still mountains of snow. 9 days. Something's wrong here.

the sidewalks in the International Village were done the next day, I believe, if not the second day the latest and they did a great job. :)

This is not uncommon in many midsized Southern Ontario cities. In both Brampton and Mississauga, the sidewalks along major thoroughfares were not cleared a whole week after the snowfall. I doubt if there were many complaints. Such cities do not hold themselves out as being genuine urban environments (i.e. pedestrian oriented urban environments); they are characterless, car-centred, suburban agglomerations and their infrastructure (and attendance thereto) reflects this fact. Apparently Hamilton now thinks of itself as just such an agglomeration. In reality, it's quite clear that the city has thought of itself as such for some decades now, and to that end, we really should not be surprised.

It's tragic, yes, but Hamilton simply is not the city we would like it to be. In truth it is barely a city any more at all. The only thing which remains genuinely urban about the place, perhaps, is its rampant poverty and relatively high population density in the lower city (the latter element being, quite obviously, just a reflection of the former).

I would like to add the perspective of someone that needs to use a power wheelchair to get around.

For the sake of better mobility, I purposely live right down town, so I can use Main St and King St. as the main travel routes.

The City recently delegated sidewalk clearing as the responsibility of the residents and businesses on these roads, within 24 hours.

These are the downtowns' 2 main bus routes, and as mentioned - getting to a bus stop and on and off the bus is a challenge for the able bodied.

So is actually getting on a bus - as indicated by a University traveler.

When it snows, for people that use wheelchairs, buggies, baby strollers, crutches, walkers, or anyone that is not sure footed, the sidewalks spell a very dangerous situation.

If you live in the core area and need groceries, you have two choices; the Fortinos mall on Dundurn, or the Market.

The Market is only open 4 days a week and has some limitations in choice, but it is actually safer to travel to. Still in either choice I am forced to take a snow shovel with me whenever I need to go out because the last thing that gets cleared is the patch of sidewalk in front of a rental unit or business.

The Curry's Art store mall will clear the entire parking lot, and leave the sidewalk full of snow.

The intersection at Dundurn and King is a death trap. The spot of sidewalk at the south eat corner is barely 30 inches wide bounded by cement poles and wood barriers for the Kentucky Fried Chicken patch of garden.

Wheelchairs barely fit on this section of sidewalk, and with the slope to allow water run off from the sidewalk into the road, I find myself constantly struggling not to slide into King Street traffic, which includes Transport Trucks regularly.

As far as getting onto a bus heading east or west, I can expect to see 5 buses pass me by citing they are too full to take on a chair.

In the deep cold of winter, this presents the threat of frost bite...we can't stamp our feet or pace back and forth to keep the circulation going.

I know that every time it snows, I will not be able to get to the stores, even after 3 days unless I take a snow shovel with me, and you would not believe how many able bodied people walk right by a person in a wheelchair having to use a shovel to move inches further.

I have shoveled my way along King St. from Queen to Dundurn , South on Dundurn to Main St., and east all the way to City Hall, just to get supplies.... while I see city workers clearing the park sidewalks!

There are regular offenders, on these two road ways, some with their own snow clearing equipment.

Sterling Cycles - insists on placing their all terrain vehicles in the front of their store which is fine, except they don't leave enough clearance between a cement pole and where they place some of the four wheelers. On snow days, it is worse.

Kentucky Fried Chicken – can manage to clear it's entire parking lot and ignores the sidewalks constantly.

The Mall on the north side of King St. where the Currys Art store is located is the same, while the retirement home next to them has snow piled on that section of sidewalk from the snow pushed off the mall parking lots...

The next time it snows, try seeing if you can push a bundle buggy along the sidewalks of Hamilton's two main roads, for groceries... then imagine having to sit in a wheelchair and do it.

And while I am at it, why does a person sitting in a wheelchair have to shovel the sidewalk clear for businesses that can manage to clear their parking lots?

Why do I have to clear other peoples sections of the main sidewalk, when I can clearly see someone from that house managed to clear the path from their front door to the sidewalk, and leave the rest.

Thinking that people walking along will flatten a path on the sidewalk, is beyond ignorant and lazy.

As for those that watch me struggle with a snow shovel and step around me like I am an inconvenience – they are beyond ignorant and should be ashamed of themselves.