The Hanging of Angelique

Afua Cooper's thorough research is matched by her amazing writing, which puts the story together in a perfect timeline that keeps the reader wanting to know what happened next. 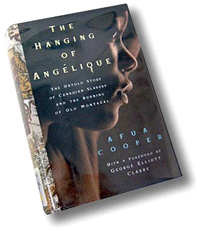 The Hanging of Angélique is the oldest slave narrative in North America. It is extremely well researched from court transcripts, church and government documents almost 300 years old.

Afua Cooper's thorough research is matched by her amazing writing, which puts the story together in a perfect timeline that keeps the reader wanting to know what happened next.

Cooper spent 15 years researching the narrative about an African slave woman name Marie-Joseph Angélique who came to be a household slave in Ville Marie (The City of Mary) or Montréal.

Born in Portugal to a slave destiny, Angélique made her way to New France, bought by a bourgeois gentleman named François Poulin de Francheville who made his money in the fur trade, iron ore mining and other ventures.

A household slave also meant she was to be a 'breeder' of more slaves and to service her master.

After her master's death his wife Thérèse de Couagne de Francheville proved to be just as wise at business and was able to take over her dead husband's affairs including his chattel slaves that included African and aboriginal slaves called "panis".

She also proved to be just as cruel, though we don't know the motive for her cruelty. Was she jealous of Angélique or was she doing what she thought she must, to keep a slave in line?

Angéligue was never content to be the 'property' of someone; she hated the French and New France. She longed for emancipation and a life that she could call her own, back in Portugal.

In the 18th century, the average lifespan was less than 50 years, and was even shorter for slaves. Angélique had reached a point in her life when she thought the circumstances were available to make a change, and might be able to find freedom in a new life.

She had taken a lover named Claude Thibault, a white servant of the same Madame Francheville. Thibault represented more than just a lover to Angélique, but a chance to be free.

After the affair was exposed, Madame Francheville forbade their relationship and decided to sell them separately to different owners. The imminent sale meant they had to act fast.

Thibault, like Angélique, hated New France and wanted to leave. The two were forbidden to see each other, but like a real life Romeo and Juliet, they secretly met in around the walled colonial city of a few thousand residents and devised a plan to escape.

It was virtually impossible for a black woman to travel alone, but together they could make it to Québec or an English colony and possibly catch a ship back to Europe.

Unfortunately we'll never know their intentions or the details of their plan. What we do know is that Angélique was charged and convicted of setting fire to the Francheville home that spread quickly to cover a large portion of what is known today as Old Montréal.

No one was killed in the fire but arson was a very serious offense back in the times of zero fire prevention and firefighting capabilities other than throwing buckets of water from the St. Lawrence as it ripped through wooden buildings.

It is likely that this was part of the plan to escape with Thibault. During the resulting chaos, Angélique was immediately arrested and Thibault was then faced with leaving by himself or staying to face 'question préalable' (torture prior to execution).

Angélique never confessed to the crime until a torture method known as "the boot" was applied. Under the agony of having her legs crushed, she admitted to setting the fire, but not to having an accomplice.

The magistrates knew better and an arrest warrant was issued for Thibault. For two years, he was never found. Posterity does not know where he went or what happened to him.

After Angélique's torture her trial was swift and relied on witnesses' opinions of who set the fire. She was convicted in Quebec and sentenced to the gallows.

Marie-Joseph Angélique hanged on June 21, 1734 in front of the Notre-Dame Basilica. It thought to be suitable that she took her last breath in view of the damage she created.

The Hanging of Angélique is a story that is more than the life and horrible end of Angélique. It tells the tale of how the slave trade operated in New France. It revealed how the colonial powers captured, enslaved and traded humans. It revealed a life in a society that we would today call 'developing'.

I can't help but wonder how as westerners we criticize other nations for acting the same way we did as we were developing, and not allowing those nations to develop at their own pace, but to try and force-develop areas of the world in a format that we determined.

It also makes me think how some so-called developed nations appear to be 'undeveloping', and reverting back to a time that employed and supported torture, mock hearings and penalties of death.

This is the first book I've read that has changed how I think about things since reading Johnny Got His Gun by Dalton Trumbo. Books like this are a treat, even if it makes your mind go where you don't want it to go. 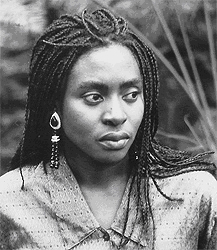 Afua Cooper appeared at Hamilton's GritLit Festival on November 3 at The Art Gallery of Hamilton.

Thanks for posting this article anbout a person I had never heard of ... We are so poorly informed on the darkness of our species past actions towards other humans here in Canada!