Without leadership that promotes a climate of compromise and brings all parties representing differing visions together, Hamilton's political divide could become entrenched.

As the municipal election looms, it's a natural time for even the most passive observer to think about their community and the leadership it has. It's not an understatement to say that Hamilton is at a volatile point in its history, with the economic foundations of the city shifting and the demographics of citizens changing every year.

Our local political leadership has been part of these changes as well, with the amalgamated City of Hamilton entrenched on the landscape representing an even greater diversity of interests.

All these factors affect how we vote as a city and indications are that the community is not as harmonious as our elected representatives might have us believe.

While many look forward to the years ahead, it is important to glance backwards to get a full sense of where we might be heading as a community.

Even before the last election, tremendous issues confronted the City of Hamilton, and many of these have played themselves out in the political arena over the past three years.

These issues have included debates on the Red Hill Valley Expressway, the rapid expansion of big-box style commercial development, the nature of employment opportunities being sought, exemplified by the encouragement of call centre development in the downtown or the use of public incentives to attract the Maple Leaf Foods rendering plan to the Glanbrook industrial park.

Also, there have been long-range development plans and strategies including GRIDS, the 30 year growth plan for the city, and the ambitious, while controversial, plan to create an "aerotropolis" economic hub at Mount Hope.

More recently, there is the heated debate over the redevelopment of a downtown heritage landmark, the Lister Block, which has quickly become less about an old downtown building and more a debate on what the city values as it charts a course for the future.

Much like the Lister process, all of these issues have become a forum for a larger debate on future visions for the city.

On a political level, debate over these issues has been divisive and confrontational. Serious concerns about a lack of transparency and meaningful public consultation are commonplace. Critics claim that those who are on the losing side of a political vote are simply exhibiting sour grapes.

Instead of building consensus, the existing culture of big winners and big losers in Hamilton municipal politics is a stark reality. If this environment of divisive politics had only been the backdrop to one or two isolated issues, one might be tempted to consider it an aberration and not a pattern.

However, this trend has played out again and again with little signs of change before the next election. So the question remains: why is this the case?

One answer may lie in the voting patterns of the 2003 municipal election, which was an excellent event for study as there were two strongly competitive candidates for mayor that exemplified two competing visions for Hamilton.

Larry Di Ianni and David Christopherson collectively gathered 80 percent of the vote and thus an analysis of 2003 voting patterns gives a clear indication of the political landscape for the majority of voting Hamiltonians.

Although both candidates spoke to several issues, the prominent ballot question was regarding the construction of the Red Hill Creek Expressway, a major highway to facilitate outwardly focussed industrial and residential growth.

Essentially, Christopherson opposed its construction and Di Ianni was in favour. However, the broader context of the election was about two different visions for the city: "smart growth" represented by David Christopherson versus a "sprawl growth" vision by Larry Di Ianni.

At the time of the last election, the extent to which each candidate represented these visions was debatable. However, in the case of Larry Di Ianni, his specific policy choices while in office have demonstrated a very strong case that his vision for Hamilton can be accurately described as sprawl growth.

In the 2003 election there were over 200 polls within the 15 wards that comprised the City of Hamilton. About 10-15 polls were located in each ward and each poll had approximately 2,500 registered voters.

A tracking of election results from this poll-level data gives an excellent illustration of where support for the two primary mayoral candidates was located (Figure 1). 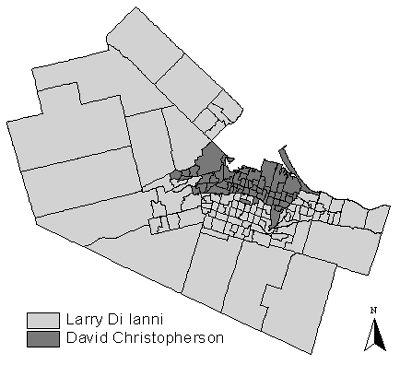 This analysis clearly shows a significant divide in the political landscape in Hamilton. Support for Christopherson, illustrated by polls won, was heavily concentrated in the more urban part of Hamilton, including the lower city, downtown, North Mountain, and central Dundas. Conversely, Di Ianni dominated the suburban areas of the city including Stoney Creek, the South Mountain, Glanbrook, Ancaster, and Flamborough.

Definitive conclusions on the enduring political preferences of voters are always difficult to make, but there were clear spatial trends at the time of the last municipal election and they were speaking to two competing visions for Hamilton. It is probable that the divisive battles that typify Hamilton politics are, in part, geographical.

Without leadership that promotes a climate of compromise and brings all parties representing differing visions together, these trends could become entrenched. It will be interesting to see how the city votes in 2006 and if the political divide in Hamilton is a new persistent faultline on the landscape.

Paul Shaker is an urban planner and a co-founder of the Centre for Community Study, a Hamilton-based urban research organization.

Great article Paul. I think that this faultline is here to stay and to be honest, I think it was forseen years ago by folks like Terry Cooke and others who were stir-crazy over the idea of amalgamation. I never really had much to offer in the debate on amalgamation while it was going on, but the day after the 2003 election it all hit me like a ton of bricks - urban Hamilton has lost it's voice. The old city now has less of a say regarding what goes on in the old city, than Stoney Creek, Ancaster and other far flung places where residents don't understand urbanism and don't care to. I fear that Hamilton is destined to fail unless we can somehow undo this forced amalgamation we know struggle with. The suburban communities don't like it and any Hamiltonian who cares about the future of our city should oppose it too. Who would have ever thought that the 'old' city of Hamilton would vote for a mayor, yet not have that mayor elected due to surrounding suburbs?
I don't think we'll see this faultline quite as prominent in this election since there doesn't seem to be any diversity of candidates to choose from like there was in 2003. However, fundamentally the faultline remains...just check out the election platform of Brian McHattie and the others who are running against him in Ward 1 - all of the challengers are basically copying Brian's playbook. None of them are coming out as 'anti-environment' or 'pro-sprawl'. They would be destroyed in Ward 1 if they did. I suspect the mayors vote may set an all-time record in the 'old city' for lowest vote for the city's top job. Ahh, 4 more years.

I don't think you can underestimate how critical this issue is to Hamilton's future. I noticed the disparate nature of Hamilton's suburbs soon after I moved in. Mountainites who told me they never went, 'down there'. Dowtownies who'd lost all hope for the future of their core and reflected on the glory days of the past instead.

After the 2003 election I tried to find some partners and funding for a research project, to analyze the voting patterns in Hamilton. Pauls' article provides a great summary of what happened and what it means; however, there is still a lot more to learn, for instance:

How do new immigrants vote?
How do low income versus high income voters compare...?

My assumptions going in were that low income voters (concentrated mainly in the core) and non-white new immigrant voters were probably the least likely to vote (some of these assumptions are borne out by recent research into Toronto's 2003 municipal election). I would love to know if these assumptions are correct, and, if so - why? And what impact does this have on Hamilton's political representation?

Hamilton is 2 towns - 3, or more towns. Unless people in the Hammer can pull in a common direction - and acknowledge the priority and importance of downtown revitalization and improving those factors that impact EVERYONE'S quality of life - then it will always be a battle of what we want versus what you want.

Progressives in Hamilton are already at the end of their tethers. When Larry 'Business as Usual' DiIanni gets in for another term I can only see the town splitting further apart.

Eventually something will have to give (hey - you can always move to Toronto!)

The problem is, the other major contender is also a "business as usual" politician, despite his recent attempts at re-branding himself. Diane Elms offers some promise in my opinion simply for her forthrightness, but her hyper-religiosity is a bit disconcerting for a secularist such as my self.

I don't know Diane, but I do know that she is passionate about Hamilton. As a Christian, I understand where she's coming from when she walks along Barton St and prays for the future and the health of our city. Don't let that scare you off simply due to religious differences. I'd much rather have a mayor who cares enough for Hamilton to do things like that, and sees how corrupt the city has been which has led to certain neighbourhoods being completely ignored and actually stolen from to subsidize sprawl. From what I can tell, money and greed is the religion of our usual crop of candidates. Give me someone who loves the people and loves the city anyday of the week over someone only concerned with their pockets and those of their campaign funders.

i can't believe we're gonna have 3 more years with stupid diianni at the helm! with all of his transgressions you'd think he might get the boot but i can't see that happening. this is a low point for hamilton politics, though i can see bright future beginning to emerge. wake me in 3 years.

As for Elms, the outward religiousness will definitely scare people away. Mixing religion with politics has certaily left a bad taste in our mouths. See the current President of the United States for an example. Now I understand Elms isn't Republican, and her platform seems solid, but that connection exists whenever a presentation is opened with a prayer. As for the lack of Spec press, well, what do you expect?

Does that mean she's against the downtown loans? Er

diIanni is able to survive and win another election thanks to his friends at the Spec. Read Ryan's piece from this issue.