(This article is also being published in the Durander, the newsletter of the Durand Neighbourhood Association.)

If you're a Hamiltonian of a certain vintage, it's likely you have fond memories of the Lister Block. For more than 50 years, the Lister was a destination building - whether to get your hair cut, or to check out the sheet music at Ann Foster's, or to visit your dentist or your lawyer. 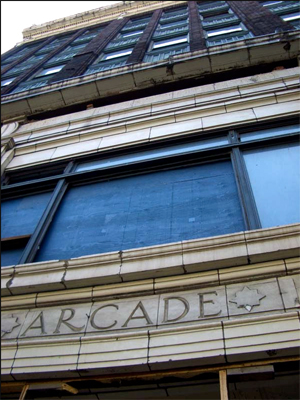 Over the last 20 years, the Lister has declined significantly. First, it was emptied of its tenants; a process that took a few years. Then, promised re-development came and went as frequently as did the owners. But through it all, many people remained fans of the Lister. Some of us loved the building. All of us hated its condition.

For years now, the Lister has stood both as a stubborn reminder of the vibrancy and vision that was the Hamilton of our youth; and as a symbol of the challenges faced by our downtown core.

The Lister, however, is not the only building in the core where property standards have not been maintained. The Thistle Club building and site and the Club Hypnotique are two others of dishonourable mention within the Durand neighbourhood.

Architecturally, perhaps the Lister is not so much elegant as it is substantial. In fact, it is its solidity that's likely to save this great icon of Hamilton's belief in itself.

The Lister Block retail mall when it was still open to the public. 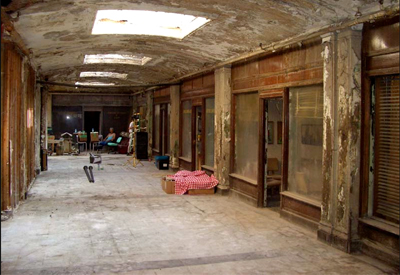 While there are many questions surrounding the as yet incomplete Lister story, one that confounds is, "How were people convinced to change from hating the condition of the building to hating the building itself?" It's as if the Lister Block itself had become the problem, with nary a mention of the owners, both present and past, and their responsibility to maintain their property, just like the rest of us.

But, through the valiant, and sometimes scorned, actions of Councillors Bob Bratina and Brian McHattie, and through the measured involvement and guidance of the Ontario Minister of Culture, Caroline Di Cocco, the Lister may once again become a contributing citizen of the City of Hamilton.

While there are many details that are still to be worked out, here are some relevant facts:

Finally, with all due respect to all of the parties who have worked so hard to come this far, here are some relevant questions:

What will happen to the Right House? The Right House won't be able to suffer the loss of its largest tenant, its arcade/mall is already vacant except for the Tim Hortons, which by the way is far too busy. Folks try getting your coffee at Pam's next block over in Jackson or Infusions across Gore.

Great article, nice to see photos of the Lister mall that don't show the decay. I wish I could've experienced the building back then.

It is indeed strange that a structural report is a complete opposite of the Liuna/Hi-Rise report from a few months prior. It demonstrates what they really want to do.

This deal stinks. Its time for the city to get serious about property standards enforcement as well as new building standards with an Architectural Review Board. Windowless, stucco shitboxes like the new motel on Market street would've never been approved.