If council is more committed to cover-ups than justice and community safety, and the clerk and the IC are committed to supporting them, then it looks from the outside like the entire tree is rotten.

Okay, so let me just make sure I'm getting the latest City of Hamilton council misadventure straight. It's been hard to keep track of this overlaid in all the pandemic pandemonium.

Cameron Kroetsch is a local activist who is an unpaid volunteer on the city's LGBT advisory committee. He's butt heads with the city before, like when the LGBT Advisory Committee passed a motion that the city shouldn't fly the rainbow flag during Pride because they hadn't really stood up for the city's LGBT community properly.

This position was vindicated when the police failed to protect the Gage park pride event from violent homophobic activists, despite (according to Kroetsch) having been specifically told exactly where the white supremacists were likely to show up, as they had the previous year (which the police should have already known).

The police defend this because Pride's leadership had asked the police not to patrol the interior of the event or set up a recruiting table (the violence was on the edge of the park).

So Mr. Kroetsch has established that he's willing to fight city hall, for apparently good reasons. Then you've got the Integrity Commissioner, a lawyer appointed and paid by council, who is ostensibly supposed to monitor council misbehavior.

Dozens of reports of such misbehavior have happened, such as Whitehead browbeating people on and off the council floor, and Merulla using his office to threaten a woman over a slow shipment ... and none of these complaints rose to needing a report before council.

The IC had very little to say when Councillor Ferguson shoved local independent journalist Joey Coleman after a heated council session, which can be considered assault.

And there are other goings on, like that a known neo-Nazi leader was working in the city hall I.T. department and therefore having access to an incredible amount of sensitive info (he has since been let go). His position was apparentty kept hidden from the public Org Chart.

And like all cities right now, hard questions are being asked about the role of policing and civilian oversight, especially with the apparent police disinterest in going after far-right groups such as the yellow-vesters who regularly protested on the forecourt, even illegally driving a bus into the space.

And finally, a fissure exists between the old, more conservative side of council and the new, fresher faces on council that are supported by the city's actively-engaged public activists, with the Mayor desperately trying to be the dispassionate peacemaker he always is.

So, with this stage set: The LGBT Advisory Committee passed a motion (item 8.4, moved by member James Diemert and seconded by member Kristeen Sprague) which identified these related problems: that a known white supremacist extremist was working in city hall and that an ex-cop had been appointed to a civilian oversight component of the police board, defeating the purpose of the oversight..

The motion, which said that City Hall should not fly the Pride flag, was passed by the LGBT Advisory Committee. No names were included in the motion.

However, both of these facts were very embarrassing to city staff. The clerk communicated with the Advisory Committee not to release the document to the public because she claimed it contained private info, and the Clerk shared with Kroetsch her interpretation of the Municipal Freedom of Information and Protection of Privacy Act (MFIPPA). When the Clerk came to the Committee to present on the matter, the Committee rejected her explanation.

Kroetsch tweeted out the motion as it was approved by the Committee. Details of the document and the redactions are here (thanks Martin Kuplēns-Ewart). 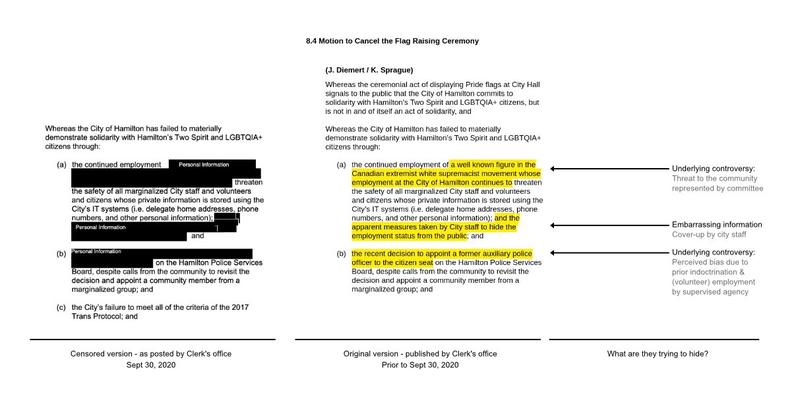 As described in the Twitter thread, looking at the contents of this document, and the redacted form that the clerk released, I don't see any private information. Instead, what I see is embarrassing information.

And given the city's established history of covering up embarrassments like the Red Hill asphalt report that described slippery conditions that may have led to multiple deaths, and the report that a sewage valve had accidentally been left open releasing a river of sewage into Cootes Paradise, the pattern is obvious.

The IC declined to include this information in the final report.

And suddenly the Integrity Commissioner's role has silently been expanded to cover committees, not just council, with no apparent justification or documentation of this change. And then, instead of the dozens of complaints against council members, a complaint against Kroetsch jumps the queue.

On the council floor, the claim is that Kroetsch ignored an order from the clerk to respect privacy and not issue the document ... but the redactions to the document don't contain PII, they contain embarrassments. And one of these elements in the document contained an active warning to an at-risk community.

Meanwhile, the police services site listed the very same information - that an ex-officer was being appointed to this oversight group. Obviously, context is everything - it's fine for an ex-cop to be welcomed into a board, as long as you don't point out that this might be a bad idea.

So the IC agreed with the clerk, and Council bought the story that Kroetsch should have taken the obviously-incorrect order from the Clerk, and not sent the document. And so council supports the report blaming Kroetsch. No real consequences, but a gesture showing that his actions are unacceptable.

Even the new Councillors support the motion, because Kroetsch went against the clerk, and they don't want advisory committees doing that.

In the wake of that decision, Councillor Whitehead began threatening other targets with the attentions of the Integrity Commissioner.

As if that isn't enough, this all happens while we have the Mayor going directly to the Premier to fight for the controversial Commonwealth Games without council direction to do so. Isn't this exactly the kind of oversight and guidance the IC is supposed to respond to? But again the IC says nothing.

In the midst of all this, the mayor is saying that this is all fine. That, in all of this lunacy, this council really isn't any worse than its predecessors. Everything Is Fine.

In light of all this, I sent the following letter to council:

With COVID and Trump dominating the news, it's difficult to keep track of Council goings-on, but what I've heard about council and the integrity commissioner is very concerning.

When the civilian oversight of the police board was being undermined, and a known white nationalist extremist leader was working at city hall, Cameron Kroetsch tried to inform the public of legitimate serious concerns, in a fashion that, examining the document, is very respectful of privacy. The same information was publicized freely elsewhere, and in greater detail.

After reviewing the details of the document and the redactions here (thanks Martin Kuplēns-Ewart), it is impossible to interpret the clerk's actions anything but a cover-up, rather than a responsible attempt to redact P.I.I. that was not present in the document, but was already available on the city's own website!

And this council has already been plagued by multiple embarrassing cover-ups. But instead of reaffirming a commitment to transparency, we instead see the council abusing the role of the IC's office to silence him? How is there no interest in trying to be better? After everything that's happened, I'd think that council would make at least a cursory effort to be above reproach.

What is the last line of defense here? What is the responsible way to disclose this information, to protect the Hamiltonian public? Because if council is more committed to cover-ups than justice and community safety, and the clerk and the IC are committed to supporting them, then it looks from the outside like the entire tree is rotten, and Mr. Kroetsch did the exact right thing in ignoring an absurd instruction.

The IC is being used to remove a pesky thorn from the side of council. This is blatantly political.

Meanwhile, when the kind of action that is supposed to draw the attention of the IC happens, what do we hear? Examples are endless, but the most recent event is the mayor going to the Premier to fight for the controversial Commonwealth games bid without council direction. Why do we even have an Integrity Commissioner if the office is simply going to be used as a mouthpiece for council?

And now councillor Whitehead is using the IC to threaten the HCCI - completely brazenly, in public, on Twitter! This is the culture of total impunity you've all created. I hope you're proud of yourselves.

This term of council has been intensely disappointing because even council members and a mayor I used to have a great deal of respect for have let us all down. Even the council members I didn't really agree with, I appreciated the diversity of perspectives they brought to council.

I can only hope that, at least for some members of council, that this was a rash decision where they were not in full possession of the facts of the case at the time of their vote to support the IC's report.

This was first published on Martin Zarate's personal website.

Update, 2020-10-16: Article updated to correct a few inaccuracies. You can jump to the changed paragraphs here, here and here.