Predictions of Chaos and Doom for Herkimer, Charlton Bike Lanes

Fear of change is a powerful reactionary force. It's time for Hamiltonians to learn from our own experience that making streets safer and more inclusive won't cause the sky to fall.

Given the human propensity for reactionary fear of change, I was not surprised to find that many of the letters anticipated the chaos and disaster that would surely follow. The streets would become gridlocked, no one would go downtown any more, the last struggling businesses would shut down, the sky would rain fire, cats and dogs would start living together - you know the drill.

How many times does this city have to implement a traffic calming project amidst a firestorm of controversy with opponents predicting doom, only to have none of the predictions come true, before we finally learn that our fear of change is misplaced?

At least once more, Miss Swann, as always.

With the aggressive pushback from some quarters to a modest traffic calming pilot project on Aberdeen, I was inspired to go back into the Spectator archives to review the letters in response to a more recent transformation: the installation of bike lanes on Herkimer Street and Charlton Avenue West in 2016. 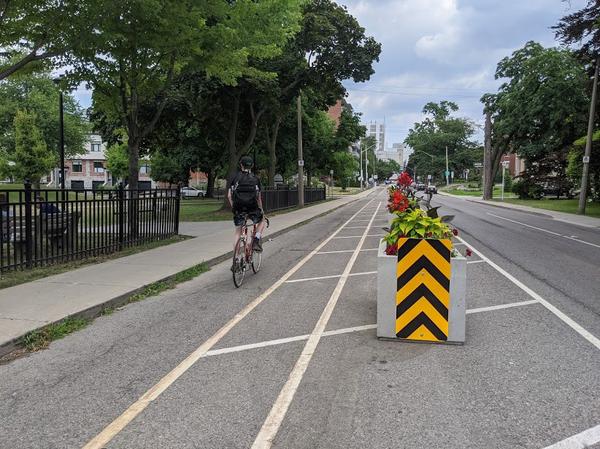 Naturally, kneejerk fear of change kicked in and the predictions of chaos and doom are no less hyperbolic than they were two decades ago in response to James and John.

"As a longtime resident of the Durand I forecast that there will be a high number of bike/car accidents as a result of the new street layout - particularly in the areas where drivers have to make a right turn from Charlton."

"As an example, every time I drive east on Herkimer (between Bay and James), I'm puzzled and angry at the same time. Cars are parked in the middle of the road and on the right curb lane leaving only one narrow lane of traffic. Furthermore, this is a hospital route. How can this be a good thing? Every second matters in a life or death situation and now we have traffic on Herkimer backed up to Caroline Street. How is an ambulance going to manoeuvre around the gridlock?"

Note: the hospital and EMS signed off on the design and there was no increase in average ambulance times after the change.

"The article says months of consultation went into the new plan - did no one think through the possible repercussions? I suggest it is not whether a cyclist will be doored but how soon! Everyone, especially cyclists, please watch out."

"Contrary to what has been reported in The Spectator many residents and cyclists are not in favour of the protected bike lanes on Herkimer and Charlton between Queen and James. There are numerous issues that cannot be ignored. The new configuration poses problems, is too dangerous, and is unnecessary."

"I have visited major European cities and nowhere have I seen the chaos that has ensued with Hamilton's new bike lanes. Since their inception, I have seen only a handful of cyclists and yet the impact is beyond reason."

"I also attended a meeting about changing Duke and Bold to two-way streets. With the exception of two people everyone there was opposed. These streets have now been changed with parking both sides, making it impossible for two cars to pass.

"It would seem to me the council does not listen to the people, and the city engineers/planners get there [sic] diplomas out of a Cracker Jack box."

Sidenote: Duke and Bold were converted to two-way and, big surprise, it was completely fine.

"Driving in the southwest area of the city has become a nightmare. Herkimer and Charlton with parking in the middle of the road? Insane. Herkimer is an access to St Joseph's Hospital. With parking like that, and one lane for traffic, how do the ambulances get through? Add in snow removal vehicles or garbage trucks.

"Duke and Bold streets now two-way streets with parking on both sides of the street, equally insane, and potentially dangerous."

"As a driver, I was horrified when I merged onto Herkimer during rush hour only to find cars parked in the middle of the road. I drove down Charlton and discovered the same thing. My question to Mr. Mayor is, does the city claim responsibility when a fatality occurs?

"Hamilton is a car city."

"While travelling along Herkimer and Charlton streets for over a year, I have observed only ONE person on a bicycle. Most recently, there were two vehicles ahead of us on Herkimer. Obviously, they didn't realize cars were legally parked in the middle of the road. As a result, both had to come to a complete stop and then work their way back into the actual car lane to their right. This would certainly not encourage folks to the city centre area."

Of course, none of the dire predictions came to pass. People quickly figured out the new arrangement, cycling on Herkimer and Charlton went up, serious collisions went down, dangerous speeding declined sharply, and car traffic still flows smoothly, even during rush hour. 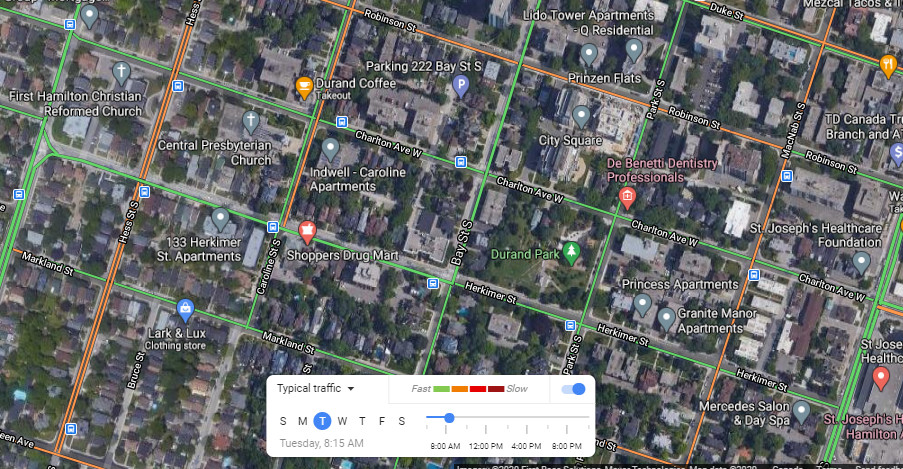 While the vast majority of letters to the editor are negative - anger and fear are strong motivators, after all - a few were positive. I'll end with this one, written a year and a half after the change:

"My wife and I live on Charlton near Queen and in the last few years have benefitted from the traffic calming measures the city has begun to introduce, such as bike lanes, speed bumps, speed signs and single-lane streets.

"Now, instead of cars flying through our neighbourhood rushing to and from work treating these streets like mini-highways and endangering residents out walking or children going to parks or schools, we see vehicles forced to slow down. They sure weren't doing it of their own accord."