As we contemplate decisions around safe travel during this ongoing pandemic people will need more options to get to work safely and sustainably.

I may be going on my last Hamilton Bike Share (SoBi) ride in nine days. I can't believe we're here, but the pandemic has brought many unforeseen challenges. 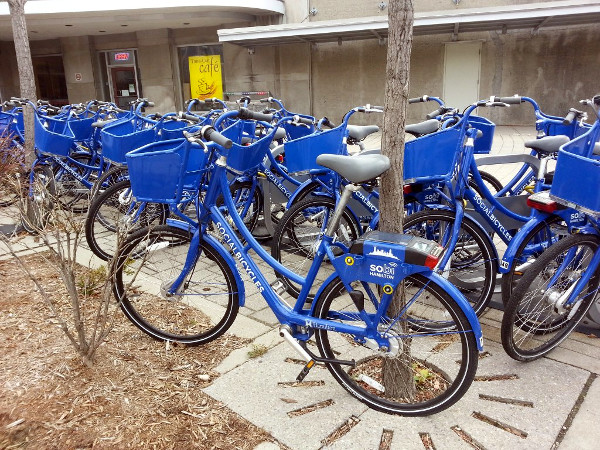 When I initially heard the news that Uber had given the City of Hamilton almost no notice that it was pulling out of its contract, I was hopeful that any potential wind up might happen during the winter months when ridership is typically lower and when there might be enough time to find a transitional fiscal partner.

And though I'm mindful that there's still the opportunity for Uber to do the right thing, I'm preparing myself for the reality that it might be up to the City of Hamilton to step up and fund this.

The pandemic is a time for bikes

We'll need our bike share system in the coming weird summer months as our governments awkwardly try to communicate what it looks like for people to interact with one another again.

In fact, using bicycles has been touted as a potentially safer way to get around while keeping a physical distance from one another and bike riding has hit its stride during the spread of COVID-19.

Space on public transit is limited and people aren't staying outside as long. Shorter and more frequent trips by bike make sense when trying to avoid the dance between narrow sidewalks and live vehicle traffic.

Cycling and bike lanes are an obvious part of the solution for those who can access them.

Cities like Brampton, Vancouver, Oakland, and Toronto are making dedicated space for additional cycling infrastructure and prioritizing multimodal transportation. It's been uplifting to see cities turn to these solutions, sometimes just pylons and paint, to provide a bit of extra space for road users when they need it most.

To that point, the Mayor of London (UK) has been very vocal recently about the importance of multimodal transit options, for those who are able to use them, recognizing that "it will take a monumental effort from all Londoners to maintain safe social distancing on public transport as lockdown restrictions are gradually eased" and adding that "we will need many more Londoners to walk and cycle to make this work".

While Hamilton hasn't yet committed to making extra sidewalk and road space, the City made a smart and important decision when it came to the Hamilton Street Railway (HSR) by ensuring the safety of drivers and riders through the use of rear-door boarding and by eliminating financial barriers by making access to buses fare free.

Access to transportation by bus is an important and vital service and the City has recognized this during the pandemic. There are many people going to work on the front lines, including folks with disabilities, who need public transit to keep operating and who are using transit because they absolutely have to in order to provide essential support to our communities during the pandemic.

But no one system is able to bridge all of the gaps. Our current approach is primarily a piecemeal effort. We need a broader way of thinking in order to ensure that everyone who needs to get around can do so safely and without physical and financial barriers standing in their way.

Perhaps this is why I've found it difficult to understand the reaction from some around how access to cycling works. In a city where many residents recognize the profound impact of public transit by bus, we don't always recognize that this must include safe and cost-effective access to all modes of transportation for all road users.

There is no reality in which public transit is going to make a sizable and immediate profit on its own while still meeting the diverse needs of riders and operating with maximum impact and benefit to everyone in Hamilton.

That's not how it's designed. The amount that's charged at the fare box on HSR buses doesn't pay for the service.

Based on the HSR's own figures from 2019, presented during this year's budget process, the revenue collected covers only 45.3 percent of the total operating cost. The service doesn't pay for itself and that's not a secret.

In the GTHA, again according to the HSR's presentation, it has the lowest average fare. The incentive to keep costs low is paramount to convincing City Council to increase or maintain the HSR's annual budget year over year. The arguments are there and no one seems to mind them.

In a 2010 report on transit in the GTHA, a study commissioned by the Residential and Civil Construction Alliance of Ontario plainly stated: "Throughout North America, public transportation is neither financially nor economically viable". The study's author went on to say that the financial shortfall "is offset by municipal, provincial, and federal subsidies".

Governments are willing to put up these subsidies because of the social, economic, and environmental benefits that public transportation generates more broadly. While individual systems, viewed in isolation, might not be financially successful, the immaterial benefits are off the charts. The environmental case for shifting our modal split becomes profound the minute we start thinking about positive impacts to our health and the health of our planet.

SoBi is complementary to all of these goals. As we contemplate decisions around safe travel during this ongoing pandemic people will need more options to get to work safely and sustainably.

As Councillor Maureen Wilson has publicly urged, and I agree, we need an equity-based solution so that everyone has access to multimodal transportation (thanks to the Everyone Rides Initiative for doing their part).

It's not just about buses. Until we understand the full costs of subsidizing road infrastructure, it's impossible for us to have conversations about the costs of making mobility equitable for all Hamiltonians.

Are there solutions out there to save bike share in Hamilton?

There are some thoughts that come to mind, right away, about how we can solve this problem.

The HSR could take it on and make it part of our public transit system. Considering the size of its operating budget, the cost associated with running the bike share system wouldn't have as much of an impact as if it were looked at in isolation. The ability to integrate these systems could help with efficiencies as stops and bike stations could be planned in tandem to help increase ridership and contribute to more last mile connections.

SoBi could start a cooperative, could raise fees for members who could afford it, or could run it through the parking authority (as Toronto Bike Share does). Both Toronto and Montréal BIXI operations initially struggled but have found some stronger footing in recent years. It's possible to see this through.

For those wanting to think through the numbers: if operating costs for SoBi were $600,000 annually (on the high side of the estimates I've seen), the system's 26,000 individual users could absorb it by paying about an extra $25 per year (approximately $2 a month).

Spread out more equitably, to those who could afford an increase, it might push this number up or see less of a return. Regardless, it gives you a sense of what might be possible here.

But, perhaps the most obvious solution is that SoBi could receive advertising or sponsorship revenue. After all, with about 900 bikes and lots of signs for advertising at stations, this could be profitable if there was the right motivation behind it.

For reasons that aren't clear to me, there doesn't seem to have been a push to do this because the system was presumed to be relatively safe, that is until the pandemic hit and changed everything.

An opportunity to keep doing something different

In my view, this isn't about ways to find money to pay for the system, even if in the short term, but about how we classify and rank modes of transportation.

But, still, nine days left to ride a SoBi is a grim and awful thought. With 26,000 users, many who depend on this service every day to get around, even closing it down for a single day is going to have an impact.

I keep thinking about what continuity of service means and the devastating blow to momentum that will occur if this is shuttered on May 31. There are already plans underway to look for places to store the bikes.

In truth, I'm not going to be as negatively impacted as riders who access this system out of need, whether through the ERI or not. As usual, I'll be fine. While I don't own a car, I have a car share membership, have my own bicycle, and can afford to use city buses at full fares.

But nothing will replace our iconic bikes or the motivation that the City has to continue to promote this service. Once it's gone, that impetus will go with it. Right now, the City is invested in physical bike infrastructure because they own it.

For many, myself included, SoBi has been a hopeful bright spot. I pass the rack at City Hall almost every single day, loaded with blue and whites, and think about the good that comes from seeing this symbol: an opportunity to keep doing something different. 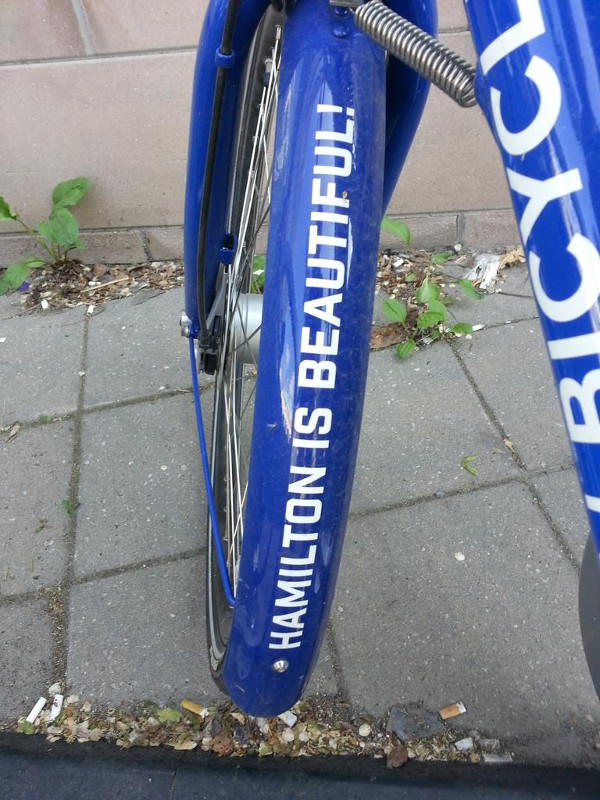 The annual operating cost per HSR bus is $374K, and each bus carries an average of 81K passenger trips a year. That works out to a cost per passenger trip of $4.61.

That is to say, SoBi is actually a more cost-effective public transportation mode than transit. Public investment in Sobi makes perfect sense during a time when we're trying to re-open the economy carefully and transit capacity is sharply limited by distancing protocols.

There is now a petition on change.org to save the SoBi bike share system: 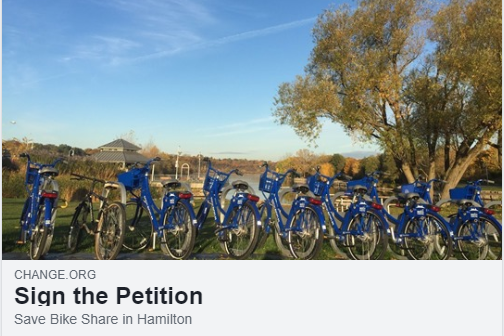 Over 6000 people have signed as of at this time. Please sign.