Everyone can reduce the amount of tax they pay by reducing the amount of carbon they use. In the long term, we all stand to benefit.

A carbon tax is the fairest, least coercive, most efficient, least bureaucratic and intrusive way to fight climate change.

Taxation is one of the best tools a society has to discourage harmful behaviour. It is the free-market, small-government way to change socially undesirable behaviour. Any other real solution is less effective and more authoritarian.

Through taxation, you can price carbon at the correct level. Set it to a price that more accurately represents the true cost, a price that captures the negative externalities - the costs to the public and the planet of a market exchange. Price carbon at the right level, and the free market does the rest. Government can get out of the way.

With carbon pricing, consumers and energy companies now pay closer to the true cost. Their behaviour is not stealth-subsidized by other people, who may or may not own oil stocks or drive a huge vehicle.

This is why a carbon tax can just as accurately be called carbon pricing. It is putting a price on carbon so producers and consumers pay some of the costs imposed on others. Price is the best incentive we have. Our whole economic system is based around that principle. Any other solution is more complicated, more authoritarian, and less effective. 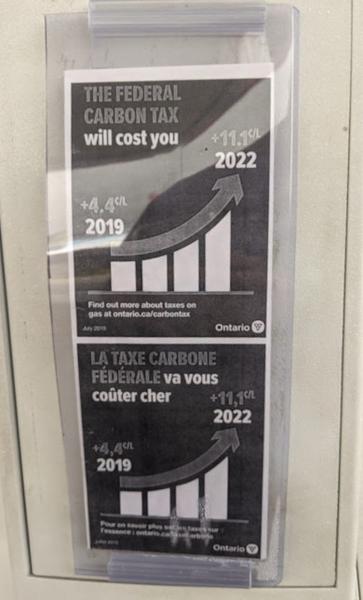 I suspect they are not offering real solutions at all. They aim to create meaningless empty rules and bureaucracy simply to pretend they're doing something about a crisis they do not take seriously.

A more extreme solution we have to change undesirable behaviour is to make something a crime and put people in jail. Without effective climate action, some on the left are already talking about putting oil executives on trial for crimes against humanity.

This may be one reason Canadian oil companies actually support carbon pricing. A carbon tax helps protect carbon producers from ethical, public relations, and legal headaches that will only mount as time goes on.

But there are some behaviours we may want to discourage without putting people in jail, behaviours where the harm to others does not rise to the level of crime.

I do not think people should go to jail for driving an inefficient vehicle. I do think they should pay for any additional environmental and healthcare costs imposed on others. Jail is an extreme, authoritarian solution to social problems which should be used as a last resort.

Paying the true market price of something in the form of a tax is not "fascism" as one friend of mine recently put it in an argument. It is, rather the gentlest and most effective government option available, assuming that we actually do wish to reduce carbon emissions.

Classical economics tells us that people behave in their own rational self-interest. If you can benefit personally or financially from burning more carbon, you will likely do it, even if it hurts other people a bit. In many cases you cannot even choose to make more ethical choices. Market forces have already made the decision for you.

Carbon pricing allows people to keep acting in their own self-interest, without having to choose between what's ethically right and what's personally beneficial. It unleashes the power of the free market in a socially positive way. Indeed, carbon pricing makes the market operate more efficiently, because negative externalities are now accounted for and priced in.

All Canadian households receive the carbon tax rebate, which accounts for most of the funds generated. Most people are coming out ahead. Only the wealthiest and least energy efficient are coming out behind. Everyone can reduce the amount of tax they pay by reducing the amount of carbon they use. In the long term, we all stand to benefit.

The carbon rebate is not "bribing us with our own money" as is sometimes said of government spending. This is paying citizens for the cost imposed on us by carbon pollution, while at the same time providing incentive to stop imposing that cost on others.

Lauren Stephen has a BA in English with a minor in Economics. His PhD dissertation looked to cybernetics and theories of evolution to consider what a post-humanist economics might look like. He is a writer, editor, software developer, and an adjunct professor at Mohawk College.

Thank you for this clear explanation of the benefits of a carbon tax.

You have to wonder whether Doug Ford, Jason Kenney and Andrew Scheer are aware that one of the strongest proponents of the carbon tax is that icon of Canadian conservatism, Preston Manning.

Thanks so much for your kind comment on my article!

Of course they are. The problem is that modern conservatism is fundamentally unserious.

Other than making some people feel good about themselves, our carbon tax will do nothing to reduce world CO2 output...

This is an all in or nothing solution. Canada can't do anything by itself and pretending it can is insanity. In 2017, Canada's output of CO2 was 700 Mega tonnes. To put that in perspective, world output of CO2 increased by double that, 1.4 Giga tonnes just between 2016-18.

The question I have is, if climate change is an existential threat, why are we treating it like any other issue? In 1943, at the height of WWII, Canada spent 37% of GDP on defeating our enemies. Yet, according to the Feds, 90% of the carbon tax revenue is being sent back so consumers.

If we even dedicated 1% of GDP to fighting climate change (energy production, carbon sequestration), that would amount to $23B. Yet, in 2023, the amount of carbon tax not going back to consumers amounts to just $600M. I may be missing something, but if we spent 37%/GDP fighting Nazis ($850 Billion in today's dollars), spending just $600M fighting climate change seems ridiculously low.

So, one of two things must be true. Either we're all doomed, or climate change is not an existential threat. Either way, in 12 years, if life is pretty much the same as today, the climate change crowd is done, politically at least.

Thank you so much for your comment on my article.

My article is not about debating the science of climate change. I believe we need to move on from that debate and discuss solutions. I don't see the logic of a lot of what you're saying, but I don't want to argue with someone who doesn't accept the basic assumptions of the debate.

There's a really interesting way to kill a fly. If you see a fly on a table, for example, move your hand very very slowly down toward it. If it doesn't just decide to fly off you will eventually have your hand right on top of it and you can just crush it. The reason you can do this is that the memory of a fly is very short. If you move your hand slow enough it will think your hand has always been there so it doesn't register as a threat.