Pain and Glory opens with a shot of a man about sixty years of age sitting on a chair completely submerged in a public swimming pool. His mouth and eyes are shut. His arms float at shoulder height. No one else is around. You will him to push up to break the surface and breath, but he does not. And, so we meet Salvador Mallo, an aging film director expertly executed by Antonio Banderas. 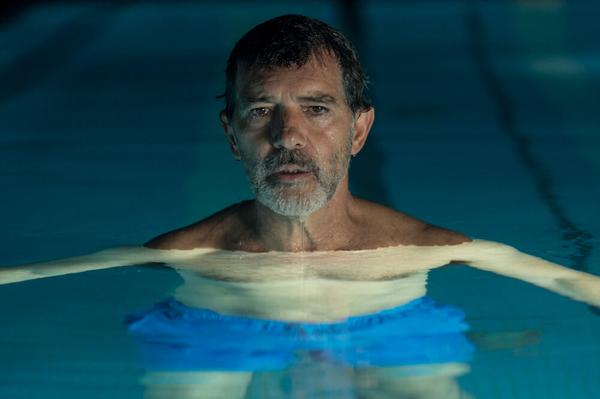 This biopic is a beautiful rendition of director Pedro Almodovar's life. It weaves love and humour with intensely dramatic moments to create a film that moves you and leaves you satisfied.

Revolving seamlessly between the present and the past, we become privy to the intimate moments and loves in Mallo's life that make him the man he is today. Yet, we meet him at a time when his body is rebelling against him so fiercely it has forced him to stop writing because to follow through with the filming is so demanding that it is entirely impossible.

It's at this time that Mallo's mediocre film, Flavour, is experiencing an unprecedented revival. Mallo is compelled to contact the movie's star, Alberto Crespo (Asier Etxeandia), to help him deal with this new found attention. This is a reluctant rekindling after not speaking since the film's release 32 years ago.

This reignited friendship of sorts, reliant upon Crespo's willingness to supply Mallo with heroine to numb his mental and physical pain, leads to the discovery of a wonderful piece of writing that has never seen the light of day.

Crespo convinces Mallo to let him perform this one-man show about his first and only true love. That's when fate steps in to set in motion an unexpected reuniting of the lovers if for only one night of good conversation.

The arrival of a serendipitous invitation to an art gallery unwittingly featuring a picture of Mallo as a young boy takes him back to his wonderful childhood filled with his mother Jacinta's (Penelope Cruz) unconditional love and his sexual awakening.

As the movie progresses so does the number and severity of the chronic conditions that impede his creative process. Yet, a significant turning point comes when Mallo's elderly mother (Julieta Serrano) confesses that he has not been the son she had hoped for. Despite being unmarried he would not let his mother move in and take care of him after his father's death.

The pain caused by this revelation is palpable. Yet, despite efforts to fulfill his mother's last wish and redeem himself in her eyes, his mother dies before that's possible.

Ironically, his mother's death opens up a world of possibilities. Mallo is finally released from her promise to never write about his family or their neighbours. More importantly, he can finally write about, and take credit for, work that exposes his true self -- the self we know his mother glimpsed throughout his childhood and surely knew was the reason she was not invited to live with him until she was unable to care for herself.

Mallo's life undergoes one last dramatic liberation. After surgery to remove a benign growth in his throat that is literally choking him to death, his rebirth is complete and the creative floodgates open.

Pain and Glory is a beautiful tribute to being true to yourself. It showcases the mental, physical and creative harm caused by denying a vital part of yourself while celebrating the re-affirmation of one's sexual identity.

Winner of Best Actor; Cannes Soundtrack Award: 2019 Pain and Glory will be released in Canada on October 18, 2019.