There is a very serious safety issue with the bicycle lane being obstructed by the door zone of adjacent parked cars.

New bicycle lanes were recently installed on Gage Avenue, north of Dunsmure Road. As we can see from the following photographs, there is a very serious safety issue with the bicycle lane being obstructed by the door zone of adjacent parked cars.

I have previously written about unsafe door zone bike lanes. Let's see if these newest lanes are any better. 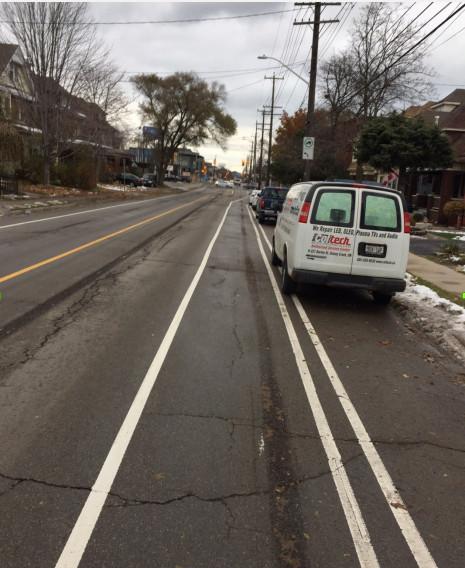 As we see from photo #1, this is a door zone bike lane. There are a considerable number of motor vehicles parked adjacent to the bike lane in a way that poses an unacceptable safety risk due to dooring anyone who is using the bike lane.

At first glance, one may think that motor vehicle operators have parked unduly far away from the curb due to the snow seen in the photo. But this is not the case, as is shown in photo #2. 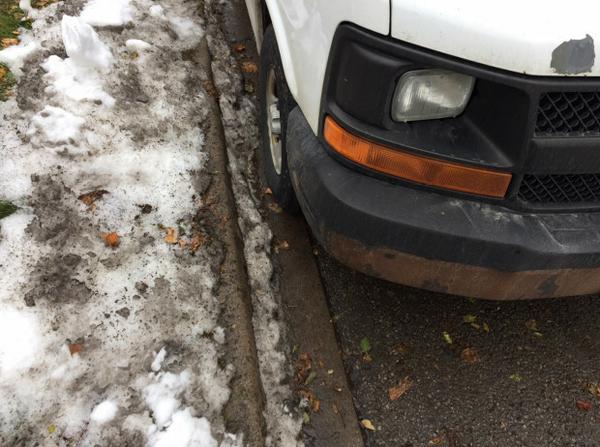 Photo #2: Close up of right front tire of white van in foreground of photo #1

We see in photo #2 that the white van in the foreground of photo #1 is actually parked quite close to the curb, and yet its door zone is substantially intruding into the bicycle lane. 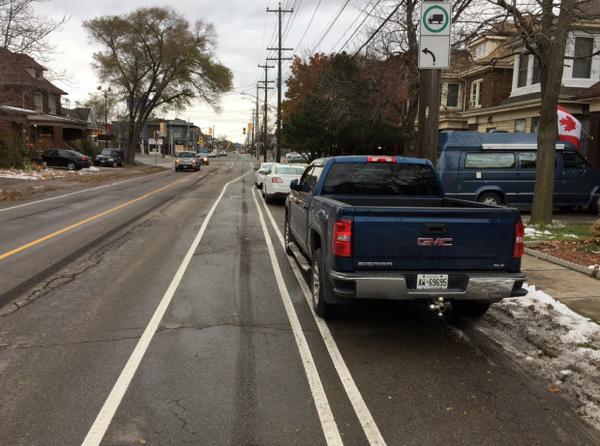 Photo #3 is of the blue pick-up truck that is seen immediately to the north of the white van in photo #1. It is the next motor vehicle in this line of parked motor vehicles.

As we see from photo #4, it is parked with its tire almost touching the curb. In spite of this, its door zone is substantially intruding into the bicycle lane, posing an unacceptable danger to bicycle traffic.

Photos #5 and #6 are showing a repetition of this same danger with the white car next in line. Although it is parked with its tire next to the curb, its door zone is intruding into the bicycle lane, posing an unacceptable risk of dooring bicycle traffic. 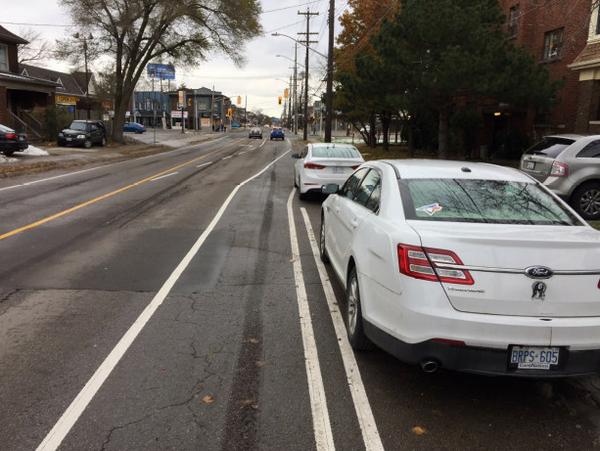 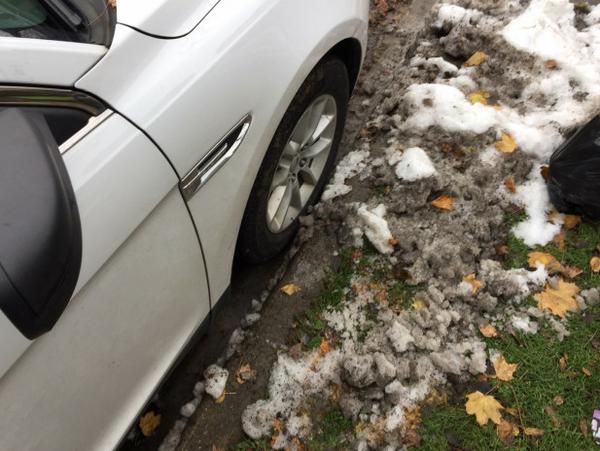 Photo #6: Close-up of tire of motor vehicle in photo #5 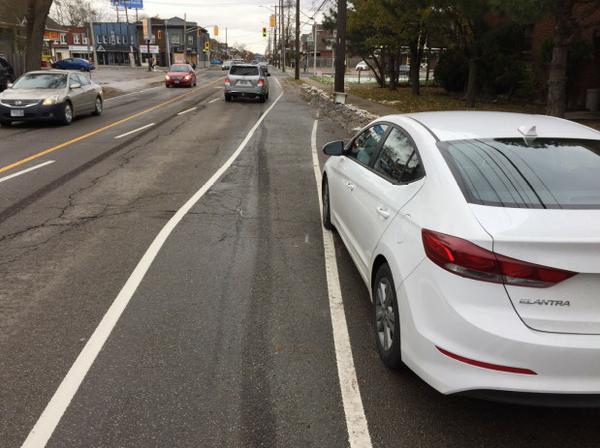 Also note that the "No Stopping" sign is posted on the hydro pole to the north of this car. So there is no sign forbidding motor vehicle operators from parking in this location.

For a review of the dangers due to dooring, please see my article published in Raise the Hammer on July 4, 2014. Doorings in Toronto accounted for 11.9 percent of all crashes until Ontario police stopped collecting statistics on dooring. This article may be found at:

The Ontario Ministry of Transportation standards [PDF] are given in Ontario Traffic Manual Book 18: Cycling Facilities.

In order to prevent the danger due to dooring, this recommends a 1.0 metre buffer zone when a bicycle lane is adjacent to motor vehicle parking, and has a minimum 0.5 metre buffer zone. See Table 4.3 on page 61.

In the City of Hamilton, motor vehicle operators are permitted [PDF] to park their motor vehicles up to 30 cm away from the curb. See item 12. (2) (a) on page 26.

This leads to the conclusion that the present roadway configuration is unacceptably dangerous. Due to the danger of dooring, the most dangerous place to ride a bicycle on this street is in the bicycle lane. It needs to be corrected to eliminate the danger of dooring and to bring it into compliance with Book 18.

2. I recommend that the Book 18 standard of a one-metre buffer zone be used between all bicycle lanes and the doors of any adjacent parked private motor vehicles.

You wonder how the traffic department justifies building unsafe infrastructure. Isn't that kind of the point of having a massive city department, to ensure compliance? You wouldn't expect, for example, if they built the Frid Street extension, that they would decide 'aw let's just make this road 50 feet wide instead of 66 because we're a little short of space here'. No, because that would be totally unsafe! Yet with bike lanes it's like some sort of variety project that they don't really need to follow the rules for.

I sadly fear that the only way change is going to come to Hamilton's door zone bicycle lanes is when someone is killed or seriously injured. And the city has to pay a gazillion dollars on the resulting lawsuit. It is a liability lawyer's dream lawsuit: the City is violating the Ontario Ministry of Transportation safety guidelines, and has been repeatedly warned about the resulting dangerous situation.

Suggestion – Take a petition to the surrounding residents and ask if they would be interested in signing it for the removal of onstreet parkig for there vehicles. Tell them you do NOT live in the neighbourhood but are an advocate of safe cycling. Im curious to see how many signature you get and some of the comments you may receive.

Site the HTA bylaw where it shows this facility is illegal and can be enforced by HPS and send it in the to city.

Suggestion - take the same petition of cyclists who use Gage. Tell them you are a rabid cycling advocate who wants to win the war on cars. I'm curious to see how many signatures you get and some of the comments you may receive.

Opening of doors of motor vehicles - 165.

(a) open the door of a motor vehicle on a highway without first taking due precautions to ensure that his or her act will not interfere with the movement of or endanger any other person or vehicle; or

(b) leave a door of a motor vehicle on a highway open on the side of the vehicle available to moving traffic for a period of time longer than is necessary to load or unload passengers. R.S.O. 1990, c. H.8, s. 165.