Two-Way Conversion of Park Street Between Cannon and Barton

As part of City Council's commitment to converting Hamilton's network of one-way streets back to two-way before the heat death of the universe, today the City is converting a section of Park Street North between Cannon Street West and Barton Street West, a distance of 650 metres.

A section of Park Street North (highlighted in yellow) is being converted to two-way today (Image Credit: Google Maps)

According to the City, there will be no changes to existing local curbside parking regulations as a result of the conversion.

The sections of Park Street between Barton and Murray Street and between Cannon and York Boulevard are already two-way.

This piecemeal approach to two-way conversion will be familiar to observers who have been urging the City to move more quickly.

Park between Cannon and York was converted to two-way in December 2010, along with York Boulevard/Wilson Street between Bay Street North and Ferguson Avenue North.

A block east, MacNab Street North was converted to two-way between Cannon and Burlington Street West in June 2013.

More recently, the plan to convert part of John Street North between Strachan Street East and Burlington Street East to two-way was rejected by local residents. Instead, they expressed a strong preference for a protected two-way cycle track that would directly reach Bennetto School, St. Lawrence Catholic School and Bennetto Community Centre while connecting to the Waterfront.

The two-way conversion did not go ahead, but this is still a good-news story: a cycle track was just installed last week and is physically protected by rubber curbing. 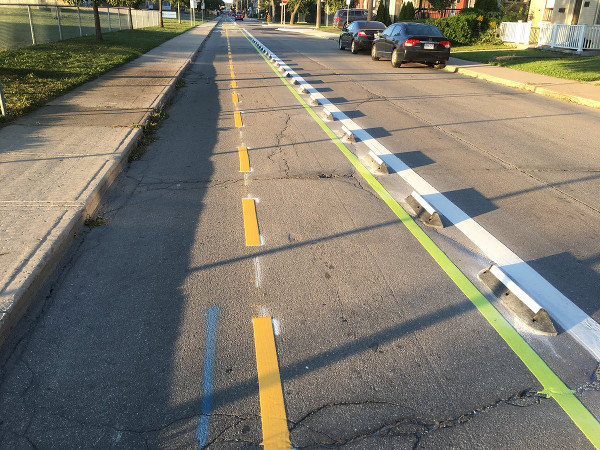 That rubber curbing on John St North was definitely needed. Because what did it look like without it, and with the solid white line and solid orange line? A 2-way street! Saw more than one car head the wrong way during SuperCrawl when the curbing wasn't installed yet.