The baby-steps two-way conversion of lower city Hamilton streets back to two-way traffic creeps forward this month with the scheduled conversions of three blocks of Hughson Street North and two blocks of King William Street. 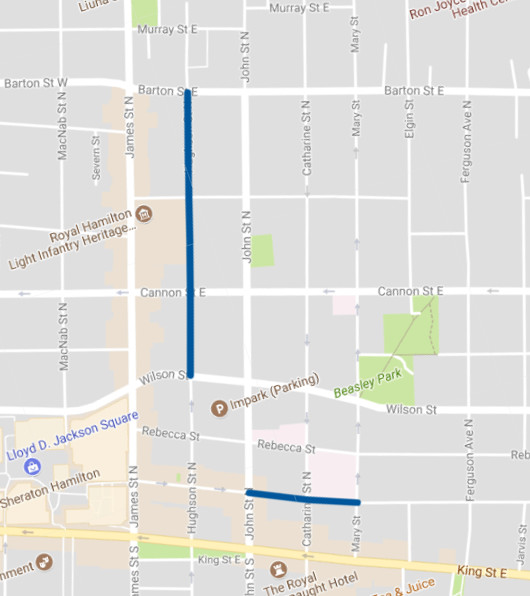 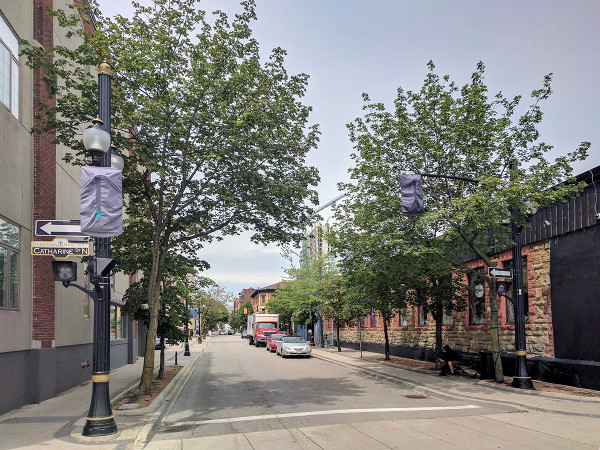 A huge swath of Hamilton streets was converted into paired, alternating one-way corridors overnight in 1956 as a way of accommodating increasing volumes of automobile traffic in the postwar era. Additional streets were converted to one-way in subsequent years.

Since then, it has become clear that the convenience of one-way streets for crosstown trips comes at a terrible cost: higher, more dangerous vehicle speeds; inhospitable, pedestrian-unfriendly streets; reduced convenience for car trips to local destinations; devastating losses to retail business; and general neighbourhood disinvestment and decline.

Despite the overwhelming evidence from cities all across North America that the mass one-way conversion projects of the 1950s were a mistake, Hamilton's political leadership has been extremely reluctant to reverse course out of fear of upsetting crosstown motorists.

While it is always welcome to see any progress in making city streets more usable and inclusive, it is impossible not to notice the slow, piecemeal and fragmentary nature of the rollout. At this rate, we should have completed the project of converting our urban corridors back into normal city streets by the end of the century.

And for those of you wondering about John St. N, the planned conversion there was halted by a decision at a community meeting of affected residents held on Monday.

While this is probably disappointing to some two-way-watchers, the proposed compromise involves a (southbound) contraflow bike lane in lieu of a car lane. Hopefully it moves forward, because most North Enders recognize that the high-speeds on this stretch are directly influenced by the street design (two wide, one-way lanes with very few stop-signs or other calming design features).

What did the residents object to about the two-way conversion? Were they concerned about speeding and cut-through traffic or, conversely, worried that it would make it slower to drive to their residences?

Two-way conversion is usually good for local residents since it is a cost effective way of slowing traffic and makes it easier to get to destinations within the neighbourhood. However, as we saw with Bold and Duke, some residents (especially older residents) worry that it is more difficult to drive on two way streets (harder to make left turns), especially if the lanes are narrowed (which also slows traffic). Loss of street parking can also be an issue. Sometimes it is just a basic fear of change. Was the proposed two-way conversion going to reduce on-street parking?

As a resident of the one-way area of John I was part of the elite group to had received an "exclusive" invitation to the meeting, which was apparently requested in the petition that Jason Farr had received with 50 or so names. The reasoning for most there to oppose was split between "it has always been one-way" (it hasn't), and concern surrounding increase volume at the Bennetto/St Lawrence School, Health/Rec Centre. While others were concerned about the timing, being so close to the start of school.

I'm generally in favour of two-way conversions as I understand it's tendency to reduce speeds. But due to the unusual width of John St I've always question how much help it would be. And I'm certain that it the conversion would have done nothing to solve the most dangerous element of John St. Which is the proximity of traffic to the kids walking and cycling on the west sidewalk near Bennetto School, Health Centre and Community Centre.

This is why when I sensed the direction of the meeting and that the status quo was looking like it was going to remain, I pushed to have the west side passing lane removed and have it replaced with a bike lane. This concept received unanimous support from everyone in the room. Which says something significant for the embrace of cycling infrastructure in Hamilton I thought.

One fairly ineffective conversion I think is Victoria from Barton to Burlington Street. There is very little in the way of business or residents on that stretch. I wish they would convert it at least from Wilson. Then some actual residents would see a benefit.

Any time of day Victoria north of Main looks embarrassingly overbuilt. Four lanes one way and it's almost entirely residential.

Piecemeal is the order of the day and the results are indeed fragmented. I drove down King William today and the experience was odd. We're creating little islands of two-way streets. It's just a weird way to go about things.