Can you imagine if our civic leaders were as upset about people being maimed and killed on our streets as we are about people in cars being slightly inconvenienced?

This past March, Hamilton City Council held an emergency session to address an urgent crisis that manifested over the winter on a major city street. Prompted by furious demands from an outraged public for quick action, Council agreed to $1.4 million in emergency spending to address the matter.

Councillors from other wards upbraided the local ward councillor for not taking the issue more seriously and spending his own area rating capital fund to fix the problem sooner.

As soon as the spending was approved, City staff were pulled from other projects and dispatched within the week. They worked around the clock - "pretty much 24/7" according to the General Manager of Public Works - for four days to address the problem.

You may be wondering what could cause such an upswell of outrage and galvanize our normally-timid council to act so rapidly and decisively to address the crisis.

Did this come in the aftermath of one of the routine, horrific collisions on our dangerous-by-design streets, in which someone was seriously injured or killed?

Nope! This was an emergency infusion of $1.4 million to replace the pavement on Main Street West because potholes were forcing drivers to slow down. Unacceptable! 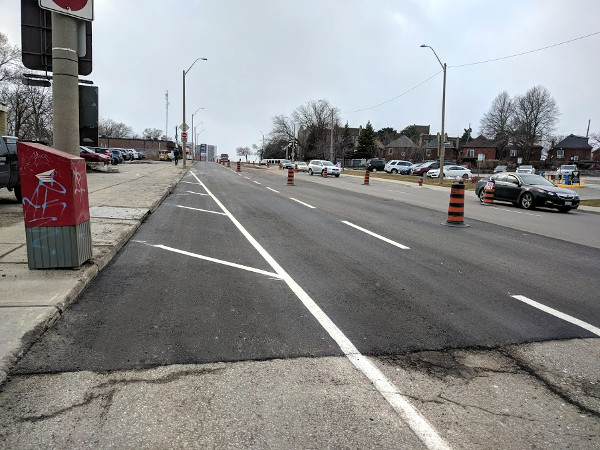 Can you imagine if our civic leaders were as upset about people being maimed and killed on our streets as we are about people in cars being slightly inconvenienced?

A couple of weeks ago, Ward 8 Councillor Terry Whitehead, who is running for election in the new Ward 14, responded to a woman in his ward who asked if he would ride with her son on his route to school "so you can see the challenges."

I have ridden for years and still ride I was taught to be aware of my surrounding and anticipate risk as I drive. Is this skill set still being taught. I know in a work place there is a lot of emphasis on this to prevent people from getting hurt. cannot bubble wrap everyone. [sic]

That is, a long-term sitting councillor told the mother of a child who wants to bike to school that he is not responsible to ensure her son can do so safely.

This is what civic negligence looks like. People are literally being crushed and killed and our leaders abdicate responsibility to do anything meaningful about it.

Meanwhile, Main Street West is nice and smooth again so you can drive as fast as you want.

The municipal election is coming up on Monday, October 22. You can find out about the candidates here. We have sent a series of policy questions to all the candidates and are publishing the responses as we receive them.

Think about what you really value in your community. Find out where the candidates stand. And cast your vote for the future you want.

I was told the City took the position they did because their failure to repair the roads was costing them a fortune.

Five years ago I stopped riding my bike on most City streets because I lost about 6 tires and rims in a 3 month period. Aberdeen and Fennel were the worst culprits.

This spring I had thousands of dollars of damage done to my car from pot holes. I lost two $500.00 tires doing 20 KPH on Main West.

Pot holes aren't speed bumps. They are evidence of neglect and failure to comply with duty. I will vote for anyone who agrees that their duty is to keep the roads in a good state of repair.

because their failure to repair the roads was costing them a fortune.

I've been saying for years that human life or property damage don't matter to city hall. But money does. A class-action lawsuit will be the only possible way to get our streets out of the 1970's and re-designed to be safe for everyone.

Damage to street surfaces goes up as the fourth power of vehicle weight. In other words, a vehicle that is twice as heavy will cause 16 times the damage.

This is why streets where the only vehicles allowed are bicycles very rarely experience potholes. We see this in North America's largest car-free residential community on The Toronto Islands. By significantly mode shifting away from motor vehicles, Dutch communities can afford to maintain their roads to maintenance standards that prevent potholes. We can easily do the same in Hamilton, and save money and lives in the process.

As to Terry Whitehead, I have already analysed the veracity of one set of his statements. I see little evidence that this man has changed his relationship with reality.