White supremacist hate groups and their sympathizers on the alt-right are lining up to endorse Doug Ford and the PC Party, and rote statements of disavowal are not good enough. 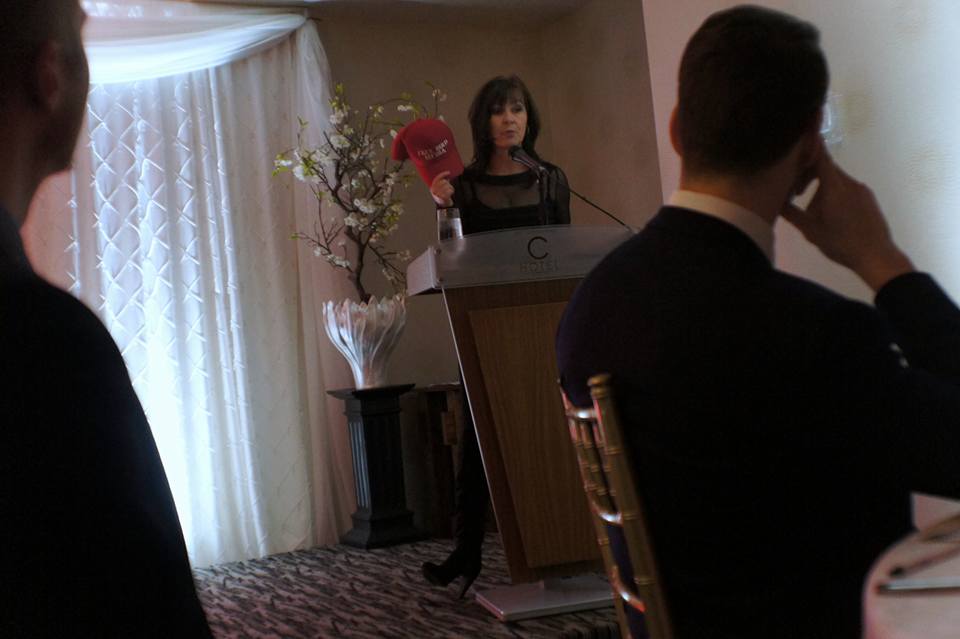 Press Progress first broke the story about Skelly holding up a red MAGA-style ball cap for "Free Bird Media" at a Christmas formal organized by the Campus Conservative associations for McMaster University and Mohawk College.

Skelly issued a statement on Twitter, writing, "To clarify, I was invited to a Christmas party by Mohawk McMaster Young Conservatives. I mingled with the crowd was handed a hat on my way to podium after speaking to a young man. I had never met him or heard of this group before. I stayed for 20 minutes and left before he spoke."

She added, "I have always denounced hateful and harmful acts and words. They have no place in our Party and no place anywhere in Ontario." 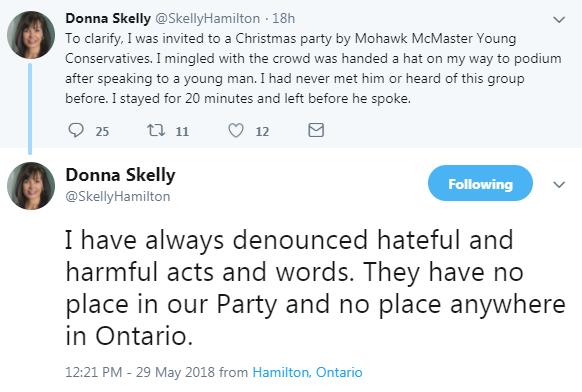 Alex Van Hamme, publisher of "Free Bird Media" and another speaker at the Christmas formal, has decried Skelly's disavowal of him. In a statement he posted yesterday on Facebook, he wrote, "Skelly completely threw me under the bus" and added that she "know[s] exactly who I am and what I'm about. Skell[y] stood on stage and declared, 'We need more media like this!' while holding my hat." 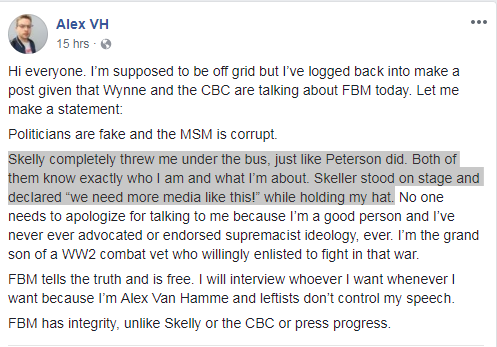 At a bare minimum, it is unsettling that Skelly participated in a speaking role without bothering to learn anything about the other speakers at the event. Holding up a hat directly modeled after Donald Trump's signature "Make America Great Again" hat is bad enough, but it is shockingly irresponsible to promote a website without knowing what you are endorsing.

Disavowals Are Not Enough

During this extraordinary historic period in which right-wing extremists espousing misogyny, racism, Islamphobia, anti-Semitism, homophobia and hate crimes are insinuating themselves back into the mainstream, all principled conservatives have an essential role to play in acting as gatekeepers for fascism and hatred.

Unfortunately, the creeping tolerance of hatred originates at the highest levels of right-wing political leadership. PC leader Doug Ford has been blowing racist dog-whistles - for example at the recent leaders' debate where he answered a question about bringing more immigrants to Northern Ontario towns by saying, "I'm taking care of our own first."

The white supremacists are listening, and they like what they are hearing.

Far-right figures and groups, from the explicitly white supremacist to the more crypto-fascist, have not been shy in proclaiming their support for "Ford Nation" and their belief that Doug Ford could create an opening for white supremacist activity similar to the effect of Donald Trump in the United States.

This, combined with racist and bigoted statements by PC candidates Andrew Lawton and Merrilee Fullerton, send a clear message to extremists that their hateful views will be more welcome under a PC government.

White supremacist hate groups and their "free speech" sympathizers on the alt-right are lining up to endorse Doug Ford and the PC Party, and rote statements of disavowal are not good enough to undo the damage to our civil discourse.

Wow! By her own admission, Donna Skelly was handed a hat by someone she had never met before. The hat promoted a group she had never heard of. And yet she had no problem waving the hat and publicly endorsing the group??!!

That is just so irresponsible!

And why is Alex Van Hamme bragging about being the grandson of a WWII combat veteran? So what! Am I supposed to applaud you for doing a good job of choosing your grandparents? What have you, yourself, done to serve your country and community?

The famous poem in praise of our ancestors, contained in Ecclesiasticus 44 begins with:

Let us now sing the praises of famous men, our ancestors in their generations.

But it does not say that their descendants are therefore praiseworthy. In verse 12, we read:

Their descendants stand by the covenants

But that covenant faithfulness is their own doing.

It so happens that my grandfather, and his brothers, also served during WWII. But I do not believe that I should be praised for something that my grandfather did. What I regard as being a tad more important for my own life is when I myself enlisted in the Canadian Forces. That was my own doing.

First the disavowal that is required in this climate: I dislike identitarians and hard right wingers. I think identity politics on either end of the horseshoe is dangerous to a stable society. I've never heard of the website you mention and don't plan to visit it, but don't doubt it may be crass and repugnant.

Per recent psychological and political tests, I'm still very much left of center on most social and economic issues. I'm voting for Doug because this identity politics witch-hunt is turning cult like and starting to scare me. You sound like evangelicals in the 80s that considered everything outside their worldview to be of Satan and verboten.

rote statements of disavowal are not good enough

To me this looks like a gradually and incrementally fomenting mindset that will be ready to send conservatives to prisons and gulags at some point down the road. The trajectory of discourse is one where it looks to me like even the "good guys" are on course to turn into despots. Will everyone concerned about increasing polarization and censorship be declared a Nazi and extirpated from society like something out of a Monty Python skit gone too far?

"I wasn't a conservative, but when they came for the conservatives, I spoke up right away, because I know how this quote ends otherwise."

Donna is solid. I worked out with her, she is salt of the earth.

nothing like the MAGA hats to make a snowflake lose it. Don't you know its iconic for Hillary's historical loss.

What's a snowflake? You are missing a capital, at the start and a question mark at the end. Why do you workout with a dishonest woman?