Here are just some of the crazy things Doug Ford said yesterday at his crazy budget media scrum.

"Yeah, the only people that should be locked up are the Liberals for this budget, I'll tell ya."

Because when you're a Trump-style populist, it's totally acceptable to threaten to lock up your political opponents.

"We saved the taxpayers over a billion dollars [in the City of Toronto], we drove efficiencies."

Four years later, Doug Ford keeps saying this and it keeps not being even close to true. This bogus claim conflates budget cuts, service cuts, user fee increases, strategic reserve drawdowns, and even budget increases that were more modest than hypothetical higher alternatives.

"get rid of the carbon tax"

"But taxing people to death"

This is not literally or even figuratively true. In Ontario, taxes have been cut multiple times over the past decade, and we are one of the lowest-taxed jurisdictions in North America.

"It's amazing how they promise billions of dollars for children that haven't even been born."

He's talking about the Liberal promise of publicly funded child care starting in 2020 for children from two and a half years until they start Kindergarten. Since that is less than two years from now, some of the children who would benefit from this have already been born.

There's a huge difference between subsidized child care, which most industrialized countries already provide, and giving away cars. It's scary that the man poised to become the next premier doesn't seem to understand that difference - or, worse, understands the difference but doesn't care.

And let's remember that this is the former Toronto City Councillor who literally gave away $20 bills to residents at a public housing complex in 2013 in a shameless and corrupt vote-buying stunt.

"I'm passionate about helping single family homes, parents, that are struggling to go to work, getting taxed to death by this government"

He keeps saying this, and it keeps not being even remotely true.

The budget proposes eliminating the provincial surtax and replacing it with a new set of tax brackets. For someone earning more than $71,500, that amounts to a $168 tax increase. To pay $200 extra, you would have to earn $130,000.

"...when they're already struggling with the highest hydro rates in North America."

That is not even close to being true. Ontario's electricity rates are a bit higher than average for North America [PDF] but nowhere near the highest. 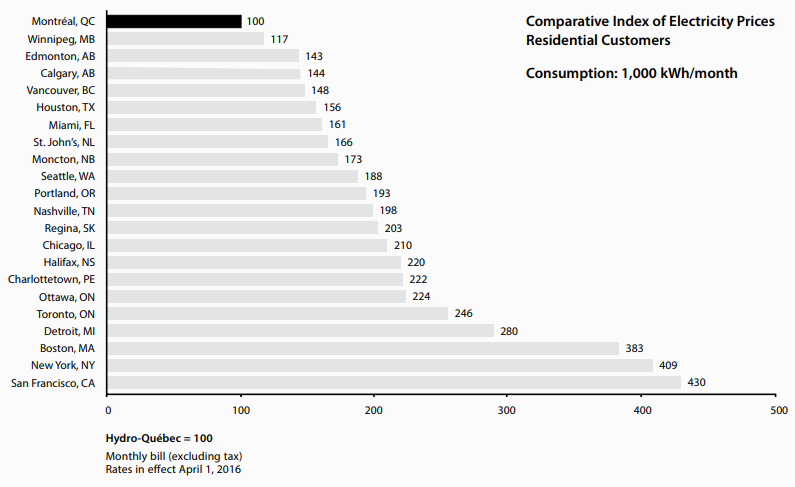 No matter how many times he says it, Ontario does not have a carbon tax.

"The difference between Kathleen Wynne and Doug Ford, I don't remember Kathleen Wynne ever going into a Toronto Community Housing building to actually see how people are struggling. Doug Ford has been in hundreds of them, and met with thousands of people in Toronto community housing."

That would be when Ford was handing out cash to residents.

According to the proposed budget, the debt is expected to increase to $325 billion, not $350 billion. That is a big number, but Ontario is a big economy, one of the largest in North America with 40% of Canada's population. 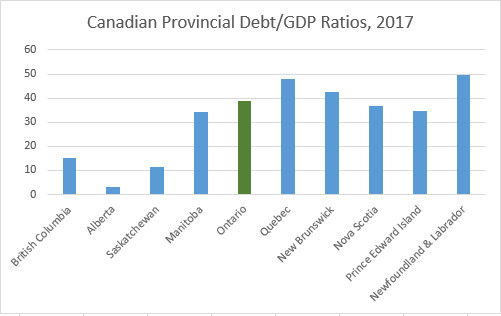 The Auditor-General disputed the 2017 budget by arguing that the pension surplus should count as a liability, not an asset. The Ontario government struck an expert panel led by Tricia O'Malley, the chair of the Canadian Actuarial Standards Oversight Council. The panel concluded that the government was following accounting best practices and its numbers were correct.

"I was up by Sault Ste. Marie, up in the North, and we had the Premier saying she was going to build a road of a billion dollars to the ring of Fire. That never happened."

The government has been carefully negotiating with First Nations communities for the past three years to get an agreement on building a network of highways linking Ontario's highway system to the Ring of Fire mineral resource deposits in Northern Ontario. The road network is expected to begin construction in 2019.

"The carbon tax, it is hard enough to compete with the world market right now."

Sing it with me: Ontario does not have a carbon tax.

Ford explained his bizarre claim that a family of five is going to face a $1,000 tax increase under the proposed budget.

"Q: So, the kids are having a tax increase?"

The only scenario in which Ford's bizarre claim holds is an imaginary family consisting of five adults, each earning $130,000 a year - for a combined family income of $650,000 a year - in order for their total tax bill to go up by $1,000.

And in response to a question from a CBC reporter:

Folks, Doug Ford is Ontario's own Donald Trump. He slings dumb slogans in place of basic policy understanding. He keeps repeating easily-debunked lies. He lashes out at the news media for doing their jobs by asking him questions. He shamelessly stokes cynicism and resentment.

One does not have to be a professional Accountant to conclude that anyone who promises to cut government taxes but not any government employees or programs AND to balance the budget is... err... shall we say "mathematically challenged."

And since I am a professional Accountant, it is rather insulting to hear him claim that there is $6 billion in mysterious undefined "waste" that has somehow magically eluded the Auditor-General and all the Accountants who work for the government.

The sad fact is there are plenty of people who will eat this up. Who will accept it as truth. Who will not bother to ask questions or look more deeply at the details regarding anything Ford says, to back up or debunk his points.

We see it in local debates over a multitude of issues. It's about to be tested at a provincial level in a way we've not seen before.

Stay classy. Can you add anything intelligent or intelligible to the conversation?

You gotta love Doug's threat to the CBC reporter. Everything he says contains implicit threats to those outside Ford Nation.

I'm voting for him. I bought a membership so I could vote for him and I donated three times. FordNation. Rob was a great man and a great mayor. Doug will be just as great or better.

I also donated to Caroline Mulroney because her father was great. And Tanya Granic Allen who also got my second vote. Watch for her in Doug's senior cabinet.

The crazy & terrifying element is that plenty of voters dont & wont care about facts, graphs or statistics. They hate Wynne and want her out. They’ll vote Ford for a lot of emotional reasons but few logical or enlightened ones.

The level of civil discourse is diminishing daily with vitrolic tirades against ‘others’ and ‘elites’. The bots, trolls, and Ford campaigners will do everything they can (or are paid to do) to disrupt, dislocate & destroy any ‘reasonable or reasoned debate’. They really DONT CARE one iota about the Truth.

Sensible and moderate voters are facing a tidal wave of destabilizing “anarchy”. All political performance is gearing up now for the SOLE end of gaining power by a kind of brute force. That Ford is a braggard and fib inventor means nothing. He’s a fighter, a pusher, and grandstander. That’s the front-running bully that Wynne, and others on the “left” are up against.

It’s going to be a slug-fest, initially.