The Province of Ontario is currently undertaking a five-year review of its Cycling Strategy.

The following text was submitted to the Ontario Ministry of Transportation as part of their public consultation for updating Ontario's Cycling Strategy. The current Ontario Cycling Strategy dates from the year 2013, and is being reviewed for its five-year update.

Statement of the Problem: Healthy Communities

Right now, motor vehicle operators kill and injure an unacceptably large number of people in Ontario. In the Greater Toronto and Hamilton Area (GTHA), local Medical Officers of Health have determined that:

The same report found that the victims are disproportionately young children, the elderly and pregnant women.

In at least two Ontario cities, Toronto and Hamilton, the Public Health Department and Medical Officer of Health have looked at the health consequences of tolerating motor vehicle operation in those cities. The results are horrific.

This report is an update of the Toronto Public Health report of November 2007, which also determined that the financial costs of people being poisoned by motor vehicle operators in Toronto was an annual average of $2.2 billion.

As part of their Vision Zero consultation, the City of Hamilton also collected information on motor vehicle crashes. From this source, we see that deaths and injuries due to motor vehicle operators crushing people are also horrific.

Ontario-wide statistics are available for the human and financial costs of traffic violence [PDF] due to motor vehicle crashes in Ontario.

Vision Zero: Statement of the Solution and Recommendations for Implementation

It is difficult to achieve a goal without measuring progress towards its accomplishment. Using the same methodology as the Toronto and Hamilton Public Health Departments, the Province of Ontario can measure poisoning and crushing deaths caused by motor vehicle operators in order to track progress towards achieving Vision Zero.

There are several ways of effectively implementing Recommendation #1 by a progressive mode shift to replace the use of private motor vehicles for transportation in Ontario with walking, cycling and public transit. It has been repeatedly demonstrated that people in Ontario are willing to embrace this mode shift whenever walking, cycling or public transit are the fastest, easiest and most convenient way of safely travelling from A to B.

Recommendation #3: Ontario's transportation infrastructure and land use policies should have as their goal to make walking, cycling or public transit the fastest, easiest and most convenient way of safely travelling from A to B.

There currently do not exist goals or targets in Ontario for cycling mode share, or for mode share for walking or public transit.

Recommendation #4: Transportation mode share targets should be set for Ontario and for each region in Ontario.

Right now, a serious obstacle to improving cycling infrastructure in Ontario is our poor quality of design engineering standards. Many people have criticized the current Book 18 of the Ontario Traffic Manual. One such criticism comes from the perspective of the Netherlands' approach to bicycle safety. 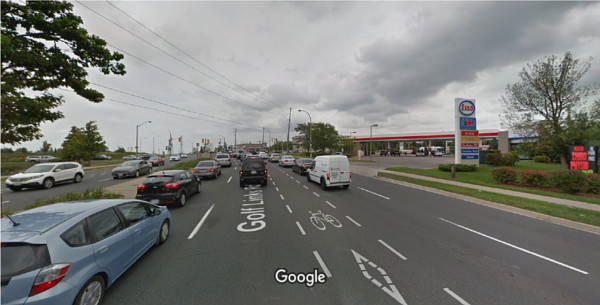 Needless to say, this grossly unsafe design gets approximately zero bicycle traffic. Would you send your 12-year-old daughter riding to school on this bike lane? I definitely would not.

Another notoriously bad design in the current Book 18 is the notorious "door zone bike lane." By putting a bike lane into the door zone of adjacent parked cars, one creates the crazy situation where the most dangerous place on the entire road to ride a bike is in the bike lane. My home city of Hamilton has an example of this on Dundurn Street South. 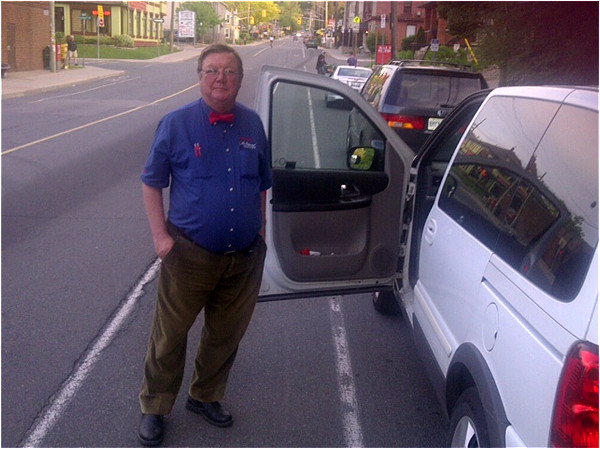 The recognized world-class benchmark design engineering standard for bicycle traffic infrastructure is the Dutch CROW Design Manual for Bicycle Traffic. Which does not allow the dangerous infrastructure that we see in Hamilton and other Ontario cities.

Recommendation #5: Reform Book 18 of the Ontario Traffic Manual by bringing it into conformance with the CROW Design Manual for Bicycle Traffic.

As stated in Section 6, Item 1.4 of Ontario's 2016 Climate Change Action Plan, it is current Ontario government policy to eliminate minimum car parking requirements from municipal zoning bylaws in Ontario. A quote from this source:

Minimum parking requirements would be eliminated over the next five years for municipal zoning bylaws.

Another key constraint upon private motor vehicle operators is the fact that they get in each other's way and cause traffic congestion. It has been amply demonstrated that, thanks to the phenomenon known as Induced Demand, it is futile to attempt to eliminate this congestion by building more roads for cars. And yet such attempts, at extraordinary cost, have been repeatedly made in Ontario and repeatedly failed.

Ontario still has some official plans to repeat this record of failure. One example is the proposed expansion of Highway #6 through Hamilton. Cost estimates currently range upwards of a mind-boggling $750 million for this absurd boondoggle.

Another step towards achieving Recommendation #3 is through changes to Ontario's Highway Traffic Act to implement what has become known as an "Idaho stop law." Starting in 1982, the US state of Idaho changed their laws to allow cyclists to treat stop signs as yield signs and to treat red traffic lights as stop signs. Since 1982, this measure has been found to increase traffic safety in Idaho.

Idaho stop rules have also become the de facto behaviour in major Ontario cities such as Hamilton and Toronto. It is inappropriate to maintain laws that people do not follow and that police do not enforce. Such a rule also helps make cycling the fastest, easiest and most convenient way of safely travelling from A to B by improving safety and helping people to maintain momentum while travelling.

The National Association of City Transportation Officials (NACTO) has an essay explaining why stop signs discourage cycling [PDF]. Another excellent resource [PDF] was developed by DePaul University for the City of Chicago.

Unfortunately, there is one provision of Ontario's Highway Traffic Act that actively discourages cycling, thereby making it more dangerous for the remaining cyclists in Ontario. This is Ontario's notorious child helmet law, which mandates the wearing of bicycle helmets for children under the age of 18.

In Australia, their introduction of an all-ages bicycle helmet law had the effect of reducing the number of cyclists by approximately one-third. By losing the "safety in numbers" effect, this made cycling much more dangerous in Australia. Some demographics, such as female secondary school students, had a much sharper drop in numbers.

Fortunately, the effect of Ontario's law has been largely mitigated by police not enforcing it and by large numbers of secondary school students refusing to obey it. It is inappropriate to maintain laws that people do not follow and that police do not enforce. However, this law does provide some social pressure, particularly upon younger children. This makes cycling more dangerous for children in Ontario by reducing the number of children cycling.

Closely related to this is the negative branding of cycling by promoting the use of helmets for transportation cycling by adults. This makes cycling more dangerous in Ontario by discouraging people from cycling.

Recommendation #10: Encourage safety through the "safety in numbers" effect by immediately ceasing all forms of helmet promotion for transportation cycling.

Similar anti-cancer promotion should be directed at car drivers. One very effective means of anti-cancer promotion for tobacco is labelling laws on tobacco products to educate users on the cancers caused by tobacco consumption. Similar labelling laws should be used to educate car drivers on the cancers caused by the fine particles and other lethal cancer-causing poisons created by car use.

However, the effectiveness of tobacco education does provide an example for how to properly associate cancer with car use in the public mind. Mandatory labelling of the purchases of everything from automobiles to gasoline has the potential to educate the public about the cancers caused by automobile use.

Recommendation #11: Educate the public about the cancer deaths and other health consequences caused by automobile use through compulsory labelling laws with the purchase of automobiles, automotive products and gasoline.