Transport Trucks Do Not Belong in the City

We should not be deforming our communities and denying the potential for traffic calming, just so that a transport truck driver can save a couple of minutes shortcutting through the heart of the city.

At around 9:30 this morning, I was standing on the southwest corner of Main Street West and James Street South, waiting for the traffic signals to change so I could cross Main northbound. As the traffic signals on Main turned amber, a flatbed transport truck in the second lane on Main Street suddenly hung an abrupt hard right turn onto James.

A woman driving in the curb lane on Main slammed her brakes to avoid getting creamed and laid into her horn. The truck driver cleared the curb where I was standing by inches and just barely missed clobbering a northbound car on James that was stopped at the red light, but somehow managed to complete the turn.

This absurd near-miss won't be recorded in any collision statistics (not that the City shares its traffic collision data anyway) or factor into any road safety design decisions, but shit like this happens all. The. Freaking. Time.

A few weeks ago, I was walking on Pearl Street across Main. The traffic signals had turned red for Main and I had a Walk signal, but it's a good thing I didn't just stride out onto the crosswalk. A transport truck going east on Main blew right through the crosswalk and came to a stop entirely blocking it. The driver studiously avoided making eye contact as I slunk in front of the huge grille. 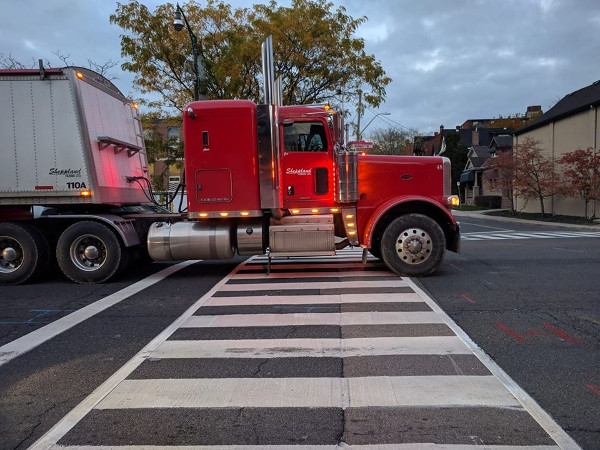 Just to be clear, the traffic signal at Main and Pearl has been there for four years. It is synchronized with the rest of the Green Wave of traffic signals along Main, and, like every other traffic signal, it cycles through a normal amber phase before turning red. There was absolutely no reason it should come as a surprise to the truck driver.

But like the white-knuckle right hook today at Main and James, this sort of thing happens all. The. Freaking. Time. 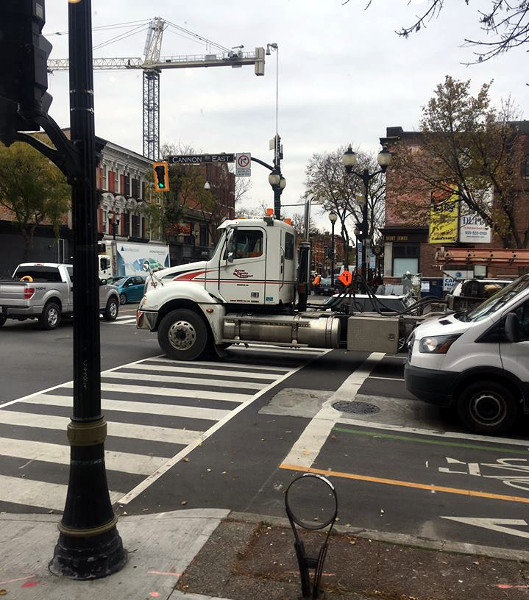 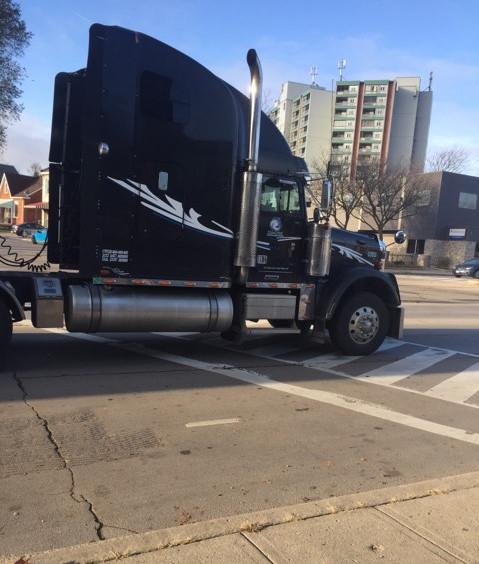 Transport trucks are a blight on lower-city Hamilton. We have allowed city streets to serve as arterials for cut-through transport trucks that should be on the ring highway system that completely surrounds the city and was built for that purpose. 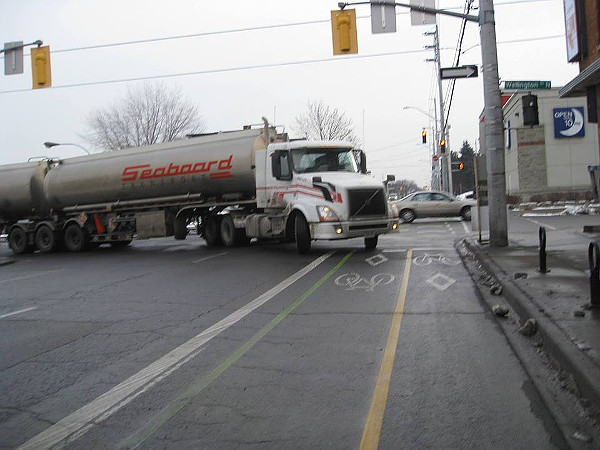 Transport trucks entering and leaving the industrial waterfront should not be driving down Cannon, Queen and King to get to the highway. They should be taking the industrial highway, Nikola Tesla Boulevard, that was built specifically to accommodate heavy truck traffic.

When Council voted to convert Queen Street to two-way this month, many residents rightly decried the fact that the conversion only applied to the section of Queen between Herkimer and Main (Queen is already two-way south of Herkimer).

The City staff excuse for not wanting to touch Queen Street North is that it's part of the City's offical Truck Route. So Strathcona and Central Neighbourhoods must continue to be traumatized by a multi-lane one-way thoroughfare and a steady parade of heavy transport trucks because the City is willing to let transport truck drivers use city streets as a shortcut instead of taking the highway.

Council last updated the Truck Route in 2010. The plan makes no distinction between cube vans and 18-wheelers and discards social and environmental considerations in favour of a narrow business interest in letting transport trucks take the most direct route across town - even if that route blasts through urban neighbourhoods.

Bowing to organized community pressure, Council agreed to take a few streets off the Truck Route: Dundurn Street North, the Kenilworth Access, Upper Ottawa Street and Concession Street. But other than these tweaks, nothing substantive about the underlying structure of the Truck Route was changed. 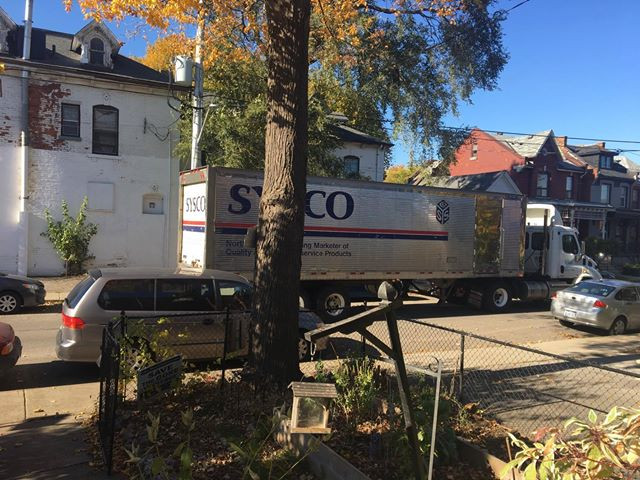 Transport truck driving down Mary Street because of course it is (Image Credit: Tanya Day Ritchie)

So here we are, seven years later, and transport trucks are still blasting through the city: creating ear-splitting noise, spewing air pollution, blowing through crosswalks, roaring through dangerous turns, and generally provoking the legitimate fear of disastrous collisions.

This is not normal. We should not be deforming our communities and denying the potential for traffic calming, just so that a transport truck driver can save a couple of minutes shortcutting through the heart of the city instead of bypassing it on our ring highway network.

This is a fundamental quality of life issue: transport trucks simply do not belong in neighbourhoods where people are trying to live their lives. Enough is enough - if we want to reclaim our streets as safe, inclusive public spaces, we need to remove these enormous, ongoing sources of danger. Our urban neighbourhoods have spent enough decades in purgatory as a sacrifice zone to the convenience of people just passing through on their way somewhere else.

I think this all the time. And not because I am infatuated with trucks, but because they grunt and snort and barrel their way through town all the time. Friends and family from elsewhere are always startled, as it's so foreign and wrong to be squished between transport trucks on city streets.

"We have allowed city streets to serve as arterials for cut-through transport trucks that should be on the ring highway system that completely surrounds the city and was built for that purpose."

So why are our city politicians still allowing this to happen?

Easy Answer: Money from the trucking industry, and inner-city businesses that want to allow trucks easy access to their buildings. Councillor Ferguson refers to this as a "competitive advantage".

A key reason why this happens is the massive subsidies paid to the trucking industry by the City of Hamilton and Province of Ontario. I predict that in the absence of these government subsidies, a vast amount of goods currently moved by truck will move by rail instead.

The damage done to a road surface increases as the fourth power of vehicle weight. In other words, a vehicle that is twice as heavy will impose 16 times as much maintenance costs. Currently, trucking companies are getting a free ride (pun definitely intended!) as the City of Hamilton and Province of Ontario pay for those costs of the trucking industry.

On the other hand, railway companies pay 100% of the costs of railway maintenance. Grossly unfair competition. It is a testament to the efficiency of railways that they can still compete at all and remain in business.

This is one case where the solution to this problem is a good dose of free market capitalism. Trucking companies should pay for the damage that they do to our roads. No more taxpayer subsidy! This will result in a big shift of goods movements from truck to rail. Needless to say, the railway industry has a much, much better safety record.

And without this constant damage, our roads will no longer be potholed nightmares with a huge maintenance backlog. Safer and better! What a win!

There is no ring road connecting Burlington Street to the 403 in the west side of Hamilton. Hence all the truck traffic. Everyone is the beneficiary of an efficient transportation sector, whether it is rail or trucks. To suggest there is a subsidy is false, when the benefits accrue to society in general, not the trucking industry. Like schools, everyone is a beneficiary of the education system, not just families that have kids that are sent to school, nobody complains about paying their share of education taxes, because they have no kids.

Trucks can take Burlington Street to the QEW/RHVP Expressway. From there they can can get to the 403 (via RHVP/Linc) and to QEW East and West.

According to Google maps the travel time actually two minutes faster going from Gage and Burlington St to just past the Linc/403 interchange via RHVP/Linc than it is taking Wellington/Cannon King to the 403. So you can't even argue it is faster to take city streets. It just feels more convenient (and is a shorter distance).

Just like other cities, trucks may have to travel further, but they have been provided with freeways and expressways to make that trip at a much higher speed than is (should be) possible on urban city streets. That is what most cities do.

And I am happy to pay the extra freight charge associated with trucks travelling this extra distance to avoid 18 wheelers on city streets. Indeed, many supporters of RHVP argued for its construction in part because it would get trucks off downtown streets.

Enough is enough - if we want to reclaim our streets as safe, inclusive public spaces, we need to remove these enormous, ongoing sources of danger.

Ryan is absolutely right. Anyone who has worked in a factory in Hamilton and been involved in industrial health and safety is familiar with the Ministry of Labour's "Hierarchy of Controls." I see that this was translated into a street safety environment by the excellent Copenhaganize blog. The #1 way to achieve safety is to remove the source of the danger.

It depends where you select on 'Burlington Street. For grain farmers delivery to Bunge at Victoria and Burlington, its 16.2 Kms longer and 8 minutes slower on the suggested route. It would be quite similar for the Seaboard truck if its picking up fuel just east of Bunge. As to the Sysco truck, it services fast-food outlets through-out the city, and it doesn't originate from Burlington Street area.. Other trucks, like Lafarge,(north of Bunge) have raw materials flowing in and ready mix concrete flowing out of their facility for the lower City. I think we need a proper expressway to connect to the eastern portion of the Burlington Street area to the 403, and that would separate out the trucks from pedestrians and bicycles. Because of a poorly built transportation systems, that doesn't meet today's expectations, the consequences are traffic thru older parts of the City.

It will be interesting to see what Council does about trucks on Queen St North when transport trucks can't make wide right turns onto King from Queen because of the LRT reducing lanes.