This is What Happens When You Don't Protect Bike Lanes

The inevitable frequent presence of parked vehicles blocking the Bay Street lanes will act as a serious deterrent to a great many people who might otherwise be willing to use them.

The City is just putting the finishing touches on new Bay Street Bike Lanes running between Aberdeen Avenue and Stuart Street. In many ways it represents a significant new benchmark in bike lane design quality for Hamilton, but there are still some design problems that seriously undercut its effectiveness.

The two-way cycle track is physically protected by knockdown bollards and rubber curbing between Hunter Street and Cannon Street, but south of Hunter the cycle track is unprotected all the way to Aberdeen.

Since it's a two-way cycle track, and hence wide enough to accommodate a parked vehicle, this makes it irresistible to people who want somewhere convenient to park. Just yesterday, RTH reader Tony Higgins came across not one but two separate vehicles blocking the lanes south of Hunter. 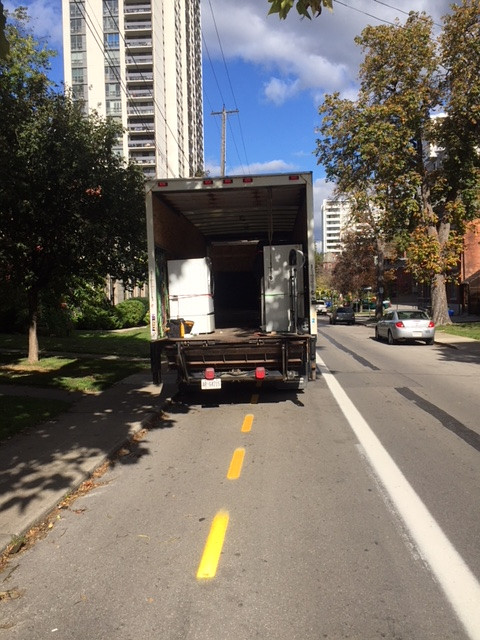 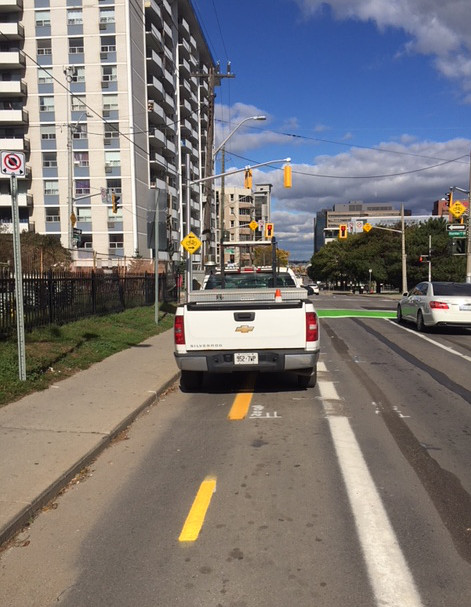 These trucks blocking the bike lane are bad enough for a cyclist travelling north on Bay, who can at least veer out into the adjacent driving lane to pass around them. But a cyclist heading south is basically screwed.

The fundamental usability of these bike lanes is subject to the whims of drivers - and it only takes one person to completely block them.

I honestly don't understand why the City of Hamilton doesn't just physically protect the bike lanes south of Hunter. There is really no argument against protection that is compelling enough to override the essential case for protection.

Even if the physical protection only goes as far as Herkimer, that will at least provide a continuous, physically-protected route connecting Bay with the major east- and westbound bike lanes on Charlton and Herkimer, which are both physically protected (by parallel parked cars).

As it stands, the inevitable frequent presence of parked vehicles blocking the Bay Street lanes will act as a serious deterrent to a great many people who might otherwise be willing to use them.

I went by city hall today where they were having the official opening of the bike lane and literally right across the street, where the lanes are protected by those little rubber things, there was a Canada Post truck parked in the bikes lanes. The guy was just sitting in there looking at his cellphone.

There is NO enforcement of the by-law.

Just like there's NO enforcement of the 40 km/h speed limits. Drivers just continue to do what they want regardless.

There is actually a parking enforcement bylaw officer on twitter who bikes around looking for this stuff. @HamOntParking

We could say the same about any live lane of traffic that would be blocked. Happens all the time, it's no different that it's happening in a bike lane. It wouldn't be ticketed either. Go on a drive down just about any street with customers receiving packages. Couriers, road crews, construction all do it. This problem is not isolated to bike lanes.

That's true, except that in this case there is no way for the southbound cyclist to just move over into another lane, which makes it much more dangerous and inconvenient. The only option is for the southbound cyclists to stop, lift their bike up onto the sidewalk, push it past the truck, and then put in back down on the street. It wouldn't take many incidents like that to have cyclists stop using the bike lane.

And even in the case where there is another lane for the cyclist to use it undoes the safety benefit of the bike lanes to have to frequently move out into traffic to pass vehicles parked in the bike lane. It also annoys drivers who aren't expecting cyclists in their lane when there is a bike lane on the street.

Adding a physical barrier is a simple solution and is done in many cities because they realize that people using bike lanes as extra parking is going to happen very frequently unless it is not physically possible.

In Europe they put metal bollards at the edge of sidewalks to stop motorists parking on the sidewalk for the same reason.

The equivalent would be that a car can't go the direction intended if blocked on a 2-way street. No way for the car to get around unless breaking the law (driving on the wrong side of the street, or on the sidewalk, to get around). People just 'do' it anyway. Same goes for bikes, they can just drive around it, or whatever.

I get your point, but this happens all too often, and across all modes of transportation.

This is also one of the major reasons why painted bus lanes have a much lower carrying capacity than physically segregated, at grade BRT or LRT rights of way. On Albert and Slater Streets in downtown Ottawa it is not uncommon to see cars and trucks either trying to make illegal right hand turns or out right stopping in the bus lane, even when there is an enormous line of buses directly behind them.