The design for the Bay Street bike lanes is a significant improvement over the status quo, but continues to discriminate against over 90 percent of potential cyclists.

Right now, bike lanes are being installed on Bay Street. They will extend from Stuart Street in the North to Aberdeen Avenue in the South. 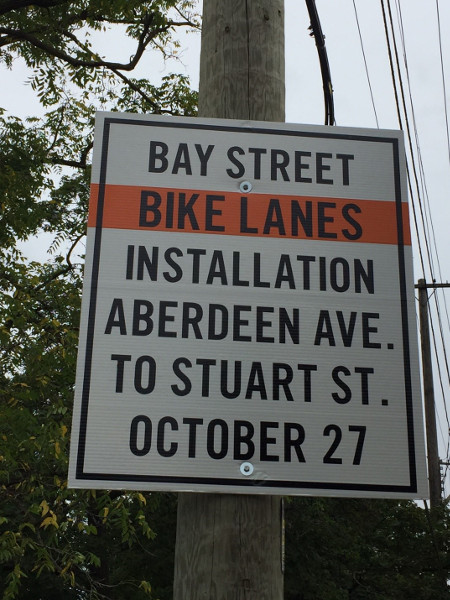 The target completion date is October 27, and City workers are taking advantage of our current fine weather to complete the work.

For the part of Bay Street that for motor vehicles is one-way Northbound, there will be bi-directional bike lanes on the West side of Bay Street. This will feature a contra-flow Southbound bike lane. Signs have already been put up showing this, and much of the pavement for the lane has been painted. 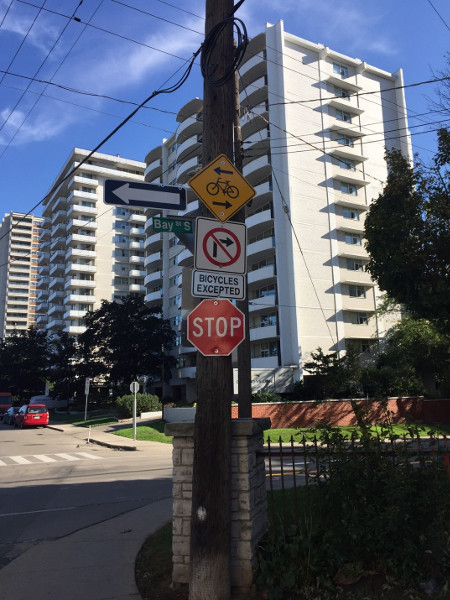 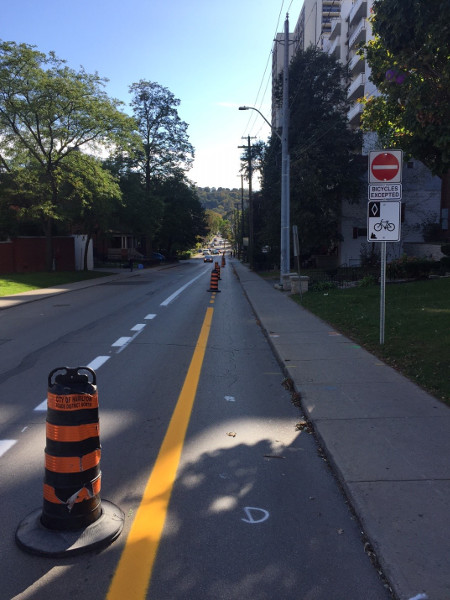 The plan for Bay Street is that between Aberdeen and Hunter, it will have bi-directional unprotected bike lanes, as shown in the above photograph. This will be similar to the existing lanes on Hunter Street.

Bay Street North of Hunter will be similar to the existing Cannon Street cycle track. It will have bi-directional bike lanes that are unprotected lanes, but with knockdown sticks and other decorative elements.

These knockdown sticks, flower planters, and so on, are not designed to offer any protection whatsoever, but do provide a visual cue. These have yet to be installed, so no photo is available. At the time this article was written, the bi-directional bike lane has only been installed as far North as Jackson Street.

This requires people who are riding northbound on Bay Street to shift to the other side of the road at Cannon. As shown in the photograph, bike lanes North of Cannon Street will be unprotected bike lanes.

The City of Hamilton is currently resurfacing Bay Street between Barton Street and Stuart Street. Unprotected bike lanes will be installed when the resurfacing is finished. 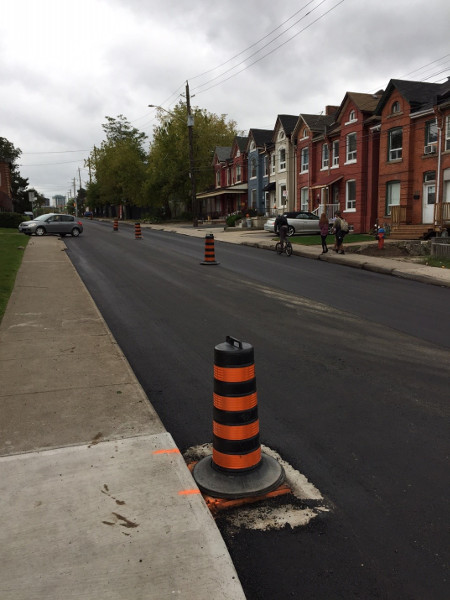 Bay Street being resurfaced between Barton and Stuart

Although the new Bay Street installation is a major step forward, there are two major safety issues with the proposed design. The first problem is the unprotected nature of the bike lanes, which exclude 92 percent of the population.

The Portland Model of cycling demographics shows why protected infrastructure is so important.

Currently, women only constitute 30 percent of bicycle traffic in the GTHA, with traffic safety being the #1 concern preventing women from cycling.

It would be fairly easy to upgrade Bay Street to protected cycle lanes. This would involve using proper traffic safety bollards to protect people from motor vehicle traffic.

Yes, this is more expensive than the "knock-down sticks," which as the name suggests are designed to knock down and provide no protection. However, the City of Hamilton's own Vision Zero web page is showing that the current annual average cost of motor vehicle collisions in Hamilton is $608,000,000 (Yes, $608 million!).

This is the cost of deaths, injuries and property damage due to motor vehicle collisions. That will pay for a lot of prevention.

In The Netherlands, 55 percent of bicycle trips are made by women and adults who are 75 years old or older make one quarter of all their trips by bicycle. This is due to safe, protected infrastructure.

The current proposed design for many of the Bay Street intersections involves a dangerous "mixing zone" where bicycle traffic is proposed to mix with motor vehicle traffic. Needless to say, this is very dangerous.

Where mixing zones have been implemented in the USA, they have resulted in fatal crashes and have been proven to be much less safe than alternatives.

"Mixing zones" also exclude the 92 percent majority of the population. To quote my mother, "At my age, I am not going to play tag with two-tonne lethal weapons." Central Public School is on Bay Street. Yet I venture to predict that not too many parents are going to send their children cycling to school if they have to mix with motor vehicle traffic.

Conclusion: A Big Step Forward, But...

The Bay Street bicycle lanes that are currently being installed are a big step forward. Without any infrastructure, only the "Strong & Fearless" were willing to cycle on Bay Street. Over 99 percent of the population was excluded from Bay Street.

The new bicycle lanes will also allow the "Enthused & Confident" to use Bay Street. We will now only be excluding 92 percent of the population, with those excluded being disproportionately women and seniors. So the new situation is over eight times better!

But an even better solution would be proper protected cycling infrastructure that would include and empower the majority of the citizens of Hamilton.