With this approval as part of the Environmental Assessment process, the project can move forward to a request for proposals to build and operate the line.

In a letter to the City of Hamilton and Metrolinx, the the Ontario Ministry of the Environment and Climate Change has approved the Environmental Project Report (EPR) Addendum for Hamilton's Light Rail Transit (LRT) plan. This clears an important procedural hurdle to implement the project. 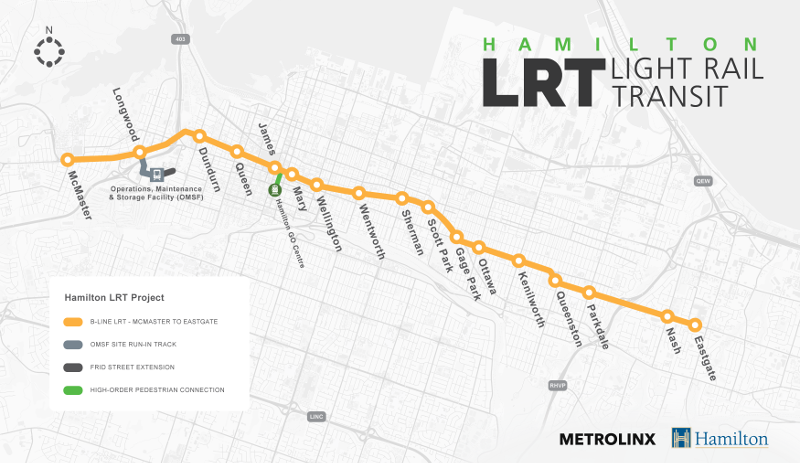 The City and Metrolinx are co-proponents of the project, and they submitted the EPR Addendum to the Province on May 29, 2017 after an extremely contentious City Council vote to approve the Addendum. (Metrolinx is a Crown Agency responsible to coordinate regional and rapid transit across the Greater Toronto and Hamilton Area.)

As per Ministry regulations, the EPR Addendum was opened up 30 days of public comments while Ministry staff reviewed the Addendum to ensure it meets Provincial environmental rules.

During that time, the Ministry received 25 objections from LRT opponents. After reviewing the objections and responses from the City and Metrolinx, the Ministry decided to approve the Addendum and allow the project to proceed. The letter, signed by Chris Ballard, newly-appointed Minister of the Environment and Climate Change, is dated August 2, 2017.

The LRT system will be procured using a contract with a consortium to design, build, finance, operate and maintain (DBFOM) the system over 30-years, with Metrolinx retaining ownership of the line and all physical assets.

Metrolinx issued a Request for Qualifications (RFQ) this past February, in which interested consortia could apply to be considered for a shortlist of companies that Metrolinx considers to be qualified to complete the project.

Now that the EPR Addendum has been approved, Metrolinx will invite a shortlist of qualified parties to submit bids on the contract itself in a Request for Proposals (RFP).

Meanwhile, the Amalgamated Transit Union (ATU) Local 107 has launched a "Keep Transit Public" campaign calling on the Province to have Hamilton's local transit service operate and maintain the LRT system.

Ward 3 Councillor Matthew Green is planning to bring a motion to Councillors at the August 9, 2017 General Issues Committee meeting to have Council ask the Province to let the HSR operate and maintain the LRT system.

It is not clear whether the Province would have to re-issue an RFQ for a contract to design, build and finance the system without operating or maintaining it. If so, that would add several months to the project and risk pushing approval of a contract beyond the next Provincial election.

Following is the text of Minister Ballard's letter on the EPR Addendum:

Thank you for submitting the Environmental Project Report (EPR) Addendum for the Hamilton B-Line Light Rail Transit (LRT) Project on May 29, 2017, which you amended on July 10, 2017, in accordance with Ontario Regulation 231/08 - Transit Projects and Metrolinx Undertakings (Transit Regulation).

The Ministry of the Environment and Climate Change (ministry) received 25 objections to the EPR Addendum. Concerns raised in the objections included air quality and noise impacts, the cost of the project; construction impacts; traffic congestion and safety; transit system network connectivity; and the capacity of roads and bridges to support LRT tracks and vehicles. You were given an opportunity to comment on the objections and the ministry considered your response.

The ministry has completed its review of the amended EPR Addendum and I wish to inform you that I am of the opinion that the proposed changes to the transit project will not have a negative impact on matters of provincial importance related to the natural environment or to a cultural heritage value or interest, or have a negative impact on a constitutionally protected Aboriginal or treaty right. As such, you may now proceed with changes to the Hamilton B-Line LRT project in accordance with the EPR Addendum, as amended July 10, 2017.

I would like to ensure that you understand that failure to comply with the provisions of the Environmental Assessment Act (EAA) or its regulations is an offence and may result in prosecution under Section 38 of the EAA. I am confident that you recognize the importance and value of the EAA and will ensure that the requirements of the EAA and the Transit Regulation are satisfied.

Following is the text of the Minister's Notice to Allow a Change to a Transit Project in Accordance with an Addendum:

RE: Proponents: City of Hamilton and Metrolinx

Project Description: Addendum, as amended and submitted on July 10, 2017, to the Hamilton B-Line Light Rail Transit (LRT) Project Environmental Project Report (EPR), for which a Statement of Completion had been submitted on January 11, 2012. The amended Addendum includes the following proposed changes:

In accordance with Subsection 15(11)(a) of Ontario Regulation 231/08, I hereby give notice allowing the City of Hamilton and Metrolinx to change the transit project in accordance with the Hamilton B-Line Light Rail Transit Project Environmental Project Report Addendum, as submitted to the Ministry of the Environment and Climate Change on May 29, 2017 and amended on July 10, 2017.

So, it seems like there aren't many companies who are experienced at operation light rail. wouldn't it make sense for HSR to bid on the contract?

Exactly. HSR is as free to bid on this as anyone, or to work with a consorium to run the LRT but let others build and run it.

I was at the last TiCats game and there were ATU guys handing out these "Okee Wee WTF" flyers that were very misleading - they were implying that there was some dastardly deed going on and that HSR was somehow being either intentionally left out or being skirted. I didn't read it till I got home but then I threw it in the trash. ATU, if you're so worried about this, why aren't you readying your bid?

Because ATU is a union, not a transit company. They are the workers, not the employer.

They are a union. Nothing to stop a union from putting a bid out there.

Perhaps what will end up happening is council will put forward a motion to encourage Metrolinx to look favourably on bids that include a plan to hire unionized HSR workers. I can't see what more they can do. Is councilor Green really going to push 'union or nothing'?

Certainly some bidders might include such a clause to increase their chances of being selected.

HSR employees have a collective agreement with the Hamilton Street Railway, not Keolis or anyone else. Unless those companies are looking to extend those contracts part and parcel, then any new employees of a new company wouldn't be in the same agreement as HSR employees. Thus, HSR employees would be losing 100 years of negotiations that make up their current agreement.

The HSR is not running the LRT line Metrolinx is. Don't worry the line will be union run. It may not be the ATU but it will definitely be union run.

Before you say it should only be the city of Hamilton and the HSR running the B-Line remember, most cities are gladly handing over the day to day running of rapid transit lines to third parties the world over because they don't want the liabilities attached with that. Why do you think P-3 agreements for these projects have been so popular with cities and their governments ? Everything now a days is about limiting liabilities of all kinds at all costs or else!

There's a huge amount of new documents on City of Hamilton's website at https://www.hamilton.ca/city-initiatives...

I really don't see the issue other than a local union, Hamilton's ATU local is trying to raise a political stink for the project until, they are shoehorned into the project by default. Hamilton HSR workers could easily sub contract themselves with any of the winners of the RFQ process. Or with the eventual winner of the RFP process.

I will use one company I'm highly familiar with as an example. I know for a fact that, Keolis will be bidding as part of one of the members of the various consortiums which are bidding in the B-Line LRT project's RFQ process. There to big not to! Keolis operates a great many LRT lines in France. About 11 of the 28 LRT systems in France in fact. They also operate or jointly operate dozens of other rail based transit operations throughout the globe. Including the ION LRT in Waterloo as part of GrandLinq. They are a private, profit producing company, they are not a government organization and are very efficient and experienced LRT operators and maintainers, even though they are 70% owned by France's SNCF. Since Hamilton's LRT process is a DBFOM (Design, Build, Finance, Operated and Maintain) final contract, its too late in the process to change it, some company will be operating the B-Line LRT. So it is most likely one of the bidding consortiums will want to include an experienced LRT operator like Keolis to be the outright operator or co-operator in some negotiated capacity. I don't see a problem for the Hamilton's HSR ATU Local or the City of Hamilton cooperating with the HSR's Union to offer themselves up to the winning operating company's as, a ready willing source for local workers as potential LRV trainee operators or maintenance staff trainees! It doesn't have to be a big political battle!

Time to start lobbying for the A line I guess?

Anyone know of a petition floating around to oppose the HSR from getting anywhere near LRT? I'm happy to sign.

This sounds a lot like a Stelco/Dofasco dynamic. In a modern context there is no reason to believe that a non-union operator would provide a lesser working environment for it's workers. I hope I'm proven wrong, but right now Councillor Green's motion reads like a pro/anti union ideological debate in the lead up to an election year in a very union supportive ward. The bigger picture for me is the long term viability of the LRT system. Who operates the system - union vs non-union seems like a relatively minor piece of the puzzle - but based on the current operation of the HSR, inserting the City of Hamilton into the equation as the operator of the LRT seems like a terrible idea.