As responsible adults, it is our responsibility to create a forgiving environment for children , an environment in which normal child behaviour does not cause harm.

Last week, I was shocked to find a very dangerous fence being erected on the south side of the Escarpment Rail Trail between the Wentworth Street South crossing and the Claremont Access overpass. Although it poses a particular danger to children, even adults are threatened by this dangerous fence. This route is heavily used by children travelling to Queen Victoria Elementary School. 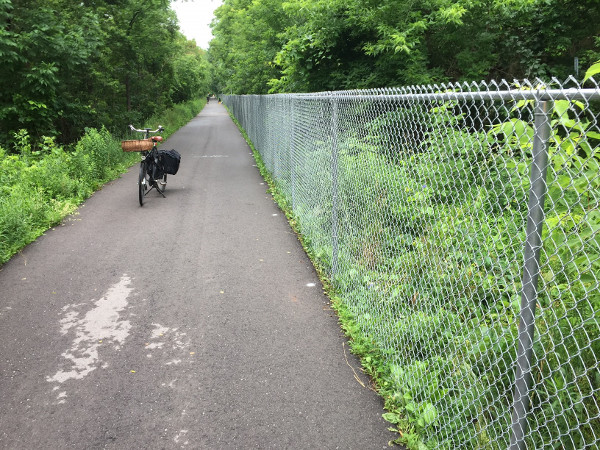 New fence along the south side of the Escarpment Rail Trail 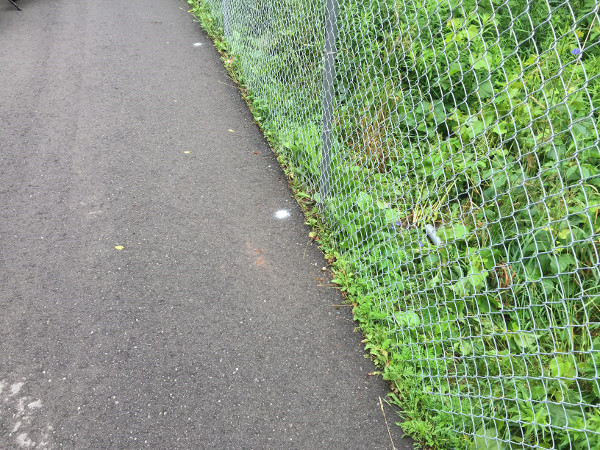 The fence design is in violation of the CROW design engineering standards, as well as the SWOV safety principles. There are three ways in which this fence design poses a threat to the public.

Due to their level of immaturity and poorer judgment, this poses a particularly serious danger to children. It is now unsafe to use the south 1/2 metre of the cycle path due to the threat posed by this fence.

But it gets worse:

2. Last week, before this fence was built, if someone inadvertently rode off the pavement, it was not a big deal. They just stopped off the path, or in the worst case, fell into the soft undergrowth. Now, anyone who does this will crash into the fence and be thrown back onto the hard pavement. Also, when they are thrown back onto the cycle path, they may crash into someone else travelling there.

If that "someone else" is a child, and the person thrown onto the child is a big guy like me, I predict that the child may experience very serious injuries.

It gets even worse:

3. Last week, before this fence was built, whenever I encountered children going to school, I would slow way down and be prepared to go off the pavement if a child were to run in front of me. Now, this option is no longer available.

By definition, children are immature and lack adult judgement. Children run around unpredictably. That is just part of being a perfectly normal child. It is to be expected that a child will unexpectedly run in front of myself or any other adult using this trail. And as responsible adults, we are prepared to avoid them and go off the pavement if a child runs in front of us. Now that option is no longer available.

This fence violates the SWOV Sustainable Safety [PDF] principle of "Forgivingness." This is the fourth of five Sustainable Safety principles and is defined in the above link as "Injury limitation through a forgiving road environment and anticipation of road user behaviour."

In other words, all people make mistakes. That is a universal part of the human condition. Innocent children, due to their lack of adult maturity and judgment, are particularly prone to mistakes.

For the sake of child safety, this fence should be removed. As an absolute minimum, the fence must be moved a minimum of two metres from the edge of the cycle path in order to comply with safety standards.

And why was the fence put there? Who requested it? Was there a problem? The path has been there 15 to 20 years. it will just collect garbage.

I do not know the answer to these very pertinent questions. To my eyes, this fence is simply an ugly eyesore that serves no purpose except making the path dangerous to its users.

Now a fence is dangerous. Come on snowflakes. This is Hammer.

I marvel at how you managed to achieve so much offense in such a tiny comment.

'Snowflake': Your moral sensitivity is exaggerated, and that makes you effeminate and infantile.

'This is Hammer': Your concern over the safety and accessibility of public spaces is contrary to the values of this community, and therefore you don't belong here.

What I marvel at is so easy to offend people now.

It's a hassle, I know. You used to be able to get a way with so much.

Really? Because the people who seem to get the most hysterically offended about different points of view are conservative white men.

Won't someone please think of the children?!?!?!?

I didn't think too much of this, but now that you mention it -- yes, it felt less calm of a ride than usual. It is a problem:

I noticed myself being nervous riding bike between the fence and pedestrians, since I can't swerve slightly in either direction (towards fence or towards pedestrians)

This part of the path is crowded with people walking around each other, and I have to ride around them, and kids are always swerving left/right, and it feels less safe to pass between pedestrians and the fence, lest I lightly collide my tip of handlebars on the fence.

Certainly, maybe some protection from falling down the escarpment could have been a well-intentioned decision, but along more than 90% of this section it's not that steep, I would fall harmlessly into soft foilage with no injury or just some slight twig scratches. Now it's far more dangerous, with lots more head-whacks on pavement....

Sigh; what a tragedy of a subtle design decision that makes this rail trail a little less fun -- what a numbskull decision.

I feel like we're looking for something to gripe about here. The fence was probably put up so people don't walk through the woods and onto the site of the new condo going up. Probably doing their due diligence to prevent a lawsuit if someone from the public is injured on the worksite. I would rather my child crash into a fence than get runover by a dumptruck.

If you can take anything positive from this, it will teach children to ride in a straight line and they'll be ready when they get on the road.

I've ridden by this fence 5 times already. Twice with children going the opposite direction. There were never any issues.

These are our public spaces. The city needs to treat them with care and consideration. And they need to consult with us before they make changes, especially rude and abrupt ones like this nasty fence.

If the community wants to change a public space to enhance safety, accessibility, or quality of life, like installing a signalized crosswalk or a separated bike lane, it has to engage in years of sustained advocacy in the face of bureaucratic inertia.

If the city wants to change a public space to restrict our movement and reduce its potential liability, it happens in a flash, with no prior warning or consultation.

The fence could have been set back into the forest and would have performed the same function of keeping people out of the construction area, but would have cost more to build. This is putting private financial interests above the public, much more scarce, resource of green space within the city.